Netflix investors can breathe a little easier now that the company has settled a lawsuit from the Temple.

Digital media giant Netflix (NFLX 0.41%) gets a lot of love from its content creators for keeping loose reins on the creative process. That open-minded approach to creativity can backfire from time to time, like when the Netflix original show Chilling Adventures of Sabrina provoked a $50 million lawsuit from the Satanic Temple.

The company has now settled its differences with the Temple. The political activist group started rattling its sabers three weeks ago but the ink was still drying on the actual lawsuit filing, which had been posted less than 24 hours earlier.

The end of a short-lived lawsuit

The settlement removes a $50 million legal threat from Netflix's financial picture, which works out to roughly 12% of the most recent quarter's bottom-line profits. Not a game-changing amount by any means, but the legal threat was likely larger than the budget for a full season of Sabrina. That's big enough to make Netflix's management sit up and take notice.

The terms of the settlement were not disclosed and neither Netflix nor the Satanic Temple has given journalists a whole lot of additional information. Here's the full statement that was given by Temple founder Lucien Greaves:

The Satanic Temple is pleased to announce that the lawsuit it recently filed against Warner Bros. and Netflix has been amicably settled. The unique elements of the Satanic Temple's Baphomet statue have been acknowledged in the credits of episodes which have already been filmed. The remaining terms of the settlement are subject to a confidentiality agreement.

Beyond that, Greaves appears to be relieved that the ordeal has ended.

"So ends one of the most overpublicized of copyright claims," continued his blog post. "Press can now stop pretending this was unique and momentous, or even interesting."

Why the Satanic Temple didn't like this Sabrina link

The issue centered on Sabrina using a statue that closely resembles a well-known statue of the goat-headed deity Baphomet -- an entity first depicted in 1856 with roots going back to the Knights Templar of the early 14th century. The Satanic Temple, which was founded in 2012 to promote social justice and the separation of church and state, uses Satan as a metaphor and Baphomet as an effective symbol.

In Sabrina, a statue with a striking resemblance to the Temple's Baphomet monument serves as a gateway to the Dark Lord himself, who also shows up in a similar (but animated) form in a couple of episodes. The end credits will now include references to the Temple's Baphomet statue and I would not be surprised to see the show's goat-faced demon take a different shape in future seasons. You see, the show makes Baphomet look like a really terrible entity.

Sabrina and her fellow witches and warlocks are expected to pledge their souls to this dark lord, whose minions conduct acts of torture, murder, and human sacrifice. All in a toned-down TV-14 kind of way, but it's still murder and physical violence. Not a great role model to say the least.

The Satanic Temple, on the other hand, is all about social justice and religious freedom and doesn't actually worship any deities at all. It is, in fact, as close as you'll get to an organized group of atheists in modern America. So it's easy to see why they don't take kindly to Sabrina playing fast and loose with one of their best-known symbols. 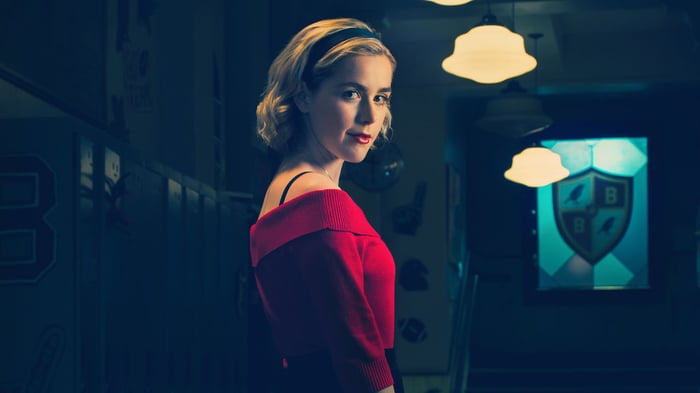 What's the fallout from this conflict?

To be clear, Netflix isn't producing Chilling Adventures of Sabrina in its own studios in New Mexico. Like many of the company's current Originals, another studio is handling the actual day-to-day production but with a final say-so from Netflix's creative team. In this case, it's AT&T (T -1.69%) subsidiary Warner Bros. Television and high-powered producer Greg Berlanti.

So you could argue that the Temple should have served that lawsuit on Warner Bros. and Berlanti, but the ultimate creative control and financial backing does come from Netflix. Those are the breaks of the original content game -- with great financial power comes great decision-making responsibility.

In the end, the Baphoment dust-up ended quietly. Netflix is not paying anything near $50 million to make this lawsuit go away, or the Securities and Exchange Commission might have required a disclosure to that effect. The show may have to move in some new creative directions in the future, and Netflix would be smart to play this up as an exciting new twist for loyal Sabrina fans. And the Satanic Temple got a moment in the press spotlight, often misunderstood but at least given an opportunity to explain how the group differs from the satanic worship you see in Sabrina.

Is This Peloton's Turning Point?

Why Aramark Stock Was Down on Tuesday

Should You Worry About the Slowdown at Amazon's Cloud Business?
409%