The upscale retailer plans capital returns equal to more than half of its current market cap between now and the end of 2022.

Shares of Nordstrom (JWN -2.79%) reached a multiyear high of $67.75 earlier this month, but the stock has plunged more than 20% since then. Most of the decline came after the company released its third-quarter earnings report on Nov. 15. Investors reacted harshly to a slowdown in the company's full-line comp sales growth, as well as a $72 million pre-tax charge related to overcharging interest on some delinquent credit card accounts.

That said, the recent share price decline could be a blessing in disguise for long-term holders of Nordstrom stock. That's because the company is likely to jump on this opportunity to ramp up its share buyback program while the stock is on sale.

At its investor day back in July, management said that it plans to return $5 billion to shareholders between 2018 and 2022. Dividend payments over that five-year period are expected to total roughly $1.3 billion, leaving $3.7 billion for repurchasing its stock.

These are both substantial sums, especially considering that Nordstrom's market cap has fallen below $9 billion due to the stock's recent swoon. However, the company expects annual free cash flow to rise steadily from $630 million last year to around $1 billion in 2022, supporting this level of capital returns.

Not much has happened yet

Between mid-2017 and early 2018, several members of the Nordstrom founding family made an effort to take the retailer private. During the course of that process, the company stopped buying back stock entirely.

While Nordstrom resumed its share repurchases earlier this year, it didn't spend much money on buybacks as its stock zoomed higher during the spring and summer. As of early November, the company had bought back just $155 million of stock year to date. 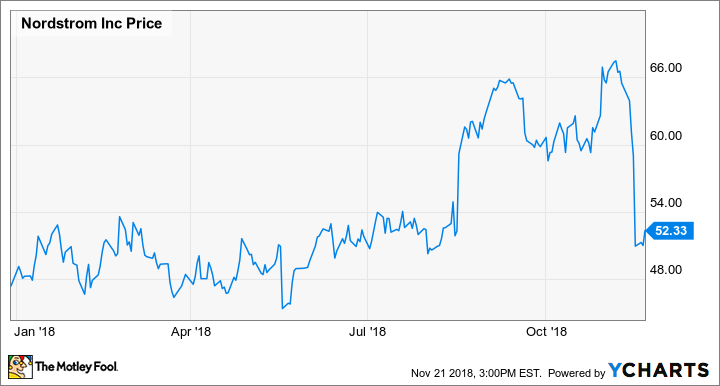 As a result, Nordstrom has quite a bit of cash piled up on its balance sheet. The company ended the third quarter with $1.1 billion in cash and equivalents, versus $672 million at the same point a year ago and $531 million a year before that. Furthermore, Nordstrom generates the vast majority of its free cash flow in the fourth quarter.

This gives the upscale retailer plenty of firepower to ramp up its share repurchases this quarter. A handful of potential real estate sales could add to its cash pile.

Nordstrom's five-year capital allocation plan calls for the company to repurchase an average of $740 million of its stock annually. As noted above, it spent just $155 million on buybacks during the first nine months of fiscal 2018. However, given that the company likely had at least $500 million of excess cash entering the fourth quarter -- and will generate plenty more over the next two months -- Nordstrom could quite conceivably "catch up" this quarter by repurchasing around $585 million in stock.

Based on Nordstrom's recent share price, that level of buyback activity would allow the company to shrink its share count by 6% to 7%, just this quarter. That would still leave nearly $3 billion of share repurchases to be executed over the following four years. Even at an average price of $70 to $80, that would be enough to reduce the share count by another 20% or more.

This level of share buybacks could provide a 40%-plus lift to Nordstrom's earnings per share by the end of 2022, relative to today.

Including the projected sales growth and margin improvement that will come from Nordstrom's ongoing growth investments, this could drive adjusted EPS to around $7 by 2022, up from $2.90 last year and an estimated $3.55 to $3.65 in 2018. As the company's rapid EPS growth plays out over the next few years, it will unlock massive upside for Nordstrom stock.

Why Nordstrom Stock Was Up This Week
401%