A year fraught with distraction could still end up as a good year.

Tesla (TSLA 1.24%) is one of the most talked-about companies out there, and CEO Elon Musk is usually at the center of the discussion. A year full of distractions at the electric auto maker is coming to a close, and despite many investors betting against the company, 2018 is on pace to finish out with the stock trading solidly up double digits. As polarizing as Tesla and its fearless leader may be, the numbers always win out.

The noise from Tesla in 2018 was coming in loud, clear, and much more frequently than most investors would have liked. Musk's antics included an errant Twitter comment that led to a Securities and Exchange Commission fine; pot smoking on the Joe Rogan podcast; and the shaming of a Wall Street analyst on the second-quarter earnings call (that one was actually pretty good, if you ask me).

Besides the drama, there were also business-centric headwinds. Tesla's Model 3 started rolling off the line this year, and ramping up the number of deliveries to the tens of thousands per quarter was described by Musk as "production hell."

Tesla's mission to "accelerate the transition to sustainable energy" is also taking hold. Several competitors gained traction in the EV market this year, like Jaguar with the launch of its I-PACE electric SUV, Lucid Motors securing funding for a factory for its premium electric sedan, and Chinese start-up NIO beginning production and delivery of its SUV across the Pacific.

All that news led to some wild stock action for Tesla. However, at the end of the roller coaster ride, things are looking up for the company and the stock. That's because, in spite of the odds and all the detractors, the automaker is making some real headway with its business. 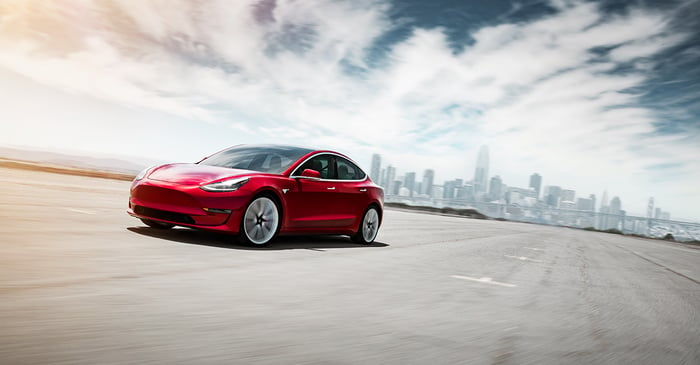 Production of the Model 3 during the third quarter reached 4,300 per week, and 56,065 were delivered to customers. Total vehicles delivered were nearly 70,000, putting Tesla on par with its premium automaker peers for the first time. All of that activity led to revenue of $6.8 billion and free cash flow (money left over after basic operations and capital expenditures are paid for) of $881 million. That is putting Tesla on a fast track to reversing its operating losses and keeping it in profitable territory.

Musk said his company is on track to deliver even more Model 3s in the fourth quarter and into 2019, and the expectation is that operations will be profitable. The car will launch in Europe and China early next year, too, and Tesla will begin some aspects of production in China starting in 2019 to circumvent a 40% tariff on the U.S.-made vehicle.

Though it was a wild ride getting to this point, Tesla is on track to deliver a double-digit-positive year for its stock. The leader in the electric vehicle market is proof that, when push comes to shove, the raw numbers eventually beat drama in the world of investing.