The Chinese “Tesla killer” is off to a decent start, but it’s still the early days for the electric-car company.

For every successful American tech story, China has an answer. NIO (NIO 4.44%) -- the electric-car start-up akin to Tesla (TSLA 11.00%) -- is the latest example. After its September 2018 IPO here in the U.S. debuted near the bottom of expectations, shares have climbed 18% as of this writing. Investors are optimistic that electric vehicles have a bright future in the world's most populous country, and that NIO is a legit player in the burgeoning industry.

An electric start to production

The third quarter of 2018 was the first one reported with NIO as a public company. Investors were treated to some promising news for the period: 4,206 of the seven-seater ES8 electric SUVs were produced, up from a mere 500 in the second quarter. And 3,268 of them were delivered, up from 100 deliveries in the three months prior.

That was good for 1.47 billion yuan (or $214 million) in revenue. While that equated to a net loss of 2.81 billion yuan, the report was at least an encouraging sign that China is ready to accept another premium electric car brand. Backing that up was the company's update that another 1,573 ES8s were delivered in October. That number was affected by a weeklong national holiday during the month, as well as assembly-line modifications to begin making NIO's second vehicle: the five-seater ES6 SUV that will begin production by year-end.

For the entire fourth quarter, deliveries are expected to more than double from the prior quarter, to between 6,700 and 7,000 units. Revenue is also expected to roughly double from the third quarter, but whether that will equate to a narrowing of the net loss remains to be seen. 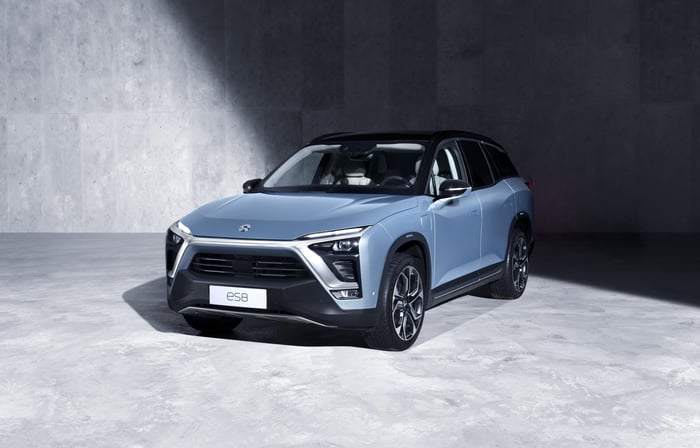 A long road to blue skies

There were 770,000 electric vehicles sold in China in 2017, and the government is targeting 7 million as soon as the year 2025. That would equate to roughly one-fifth of the total number sold if that plan pans out. To encourage manufacturers and consumers down that path, China has generous subsidies in place, at an average of $10,000 per electric vehicle in 2017.

While those benevolent offers may not last forever, it has helped foster demand for cleaner cars in China's crowded and smoggy cities. Tesla has made hay across the Pacific as a result, raking in $2 billion in revenue in 2017. Higher tariffs from the trade war with the U.S. have forced Tesla to raise prices, though, and the company is trying to circumvent the issue by building a factory in Shanghai. CEO Elon Musk said it is about three years away from production going live.

NIO's vehicles, on the other hand, are priced far less than Tesla's, in large part because it doesn't have to pay the tariff. It, too, is working on its own factory, which should begin operating by the end of 2020. In the meantime, the company is using a contract manufacturer in China to meet demand. The contract factory has capacity for over 100,000 vehicles a year, so NIO should have no problem meeting its sales requirements until then.

Nevertheless, NIO will eventually start bumping into its primary American rival sooner or later. It will also take time for the company to reach profitable scale, and there are bound to be setbacks from China's developing economy and consumer. Despite the challenges ahead, investors have so far been willing to bet that NIO could follow a similar path as Tesla, leading to the stock's strong advance since its public debut.