In its first quarter as a public company, NIO's ramp-up was solidly on track.

Chinese electric-vehicle maker NIO Inc. (NIO 8.01%) said on Nov. 6 that it lost $409 million in the third quarter, its first quarter as a public company.

NIO's $214 million in revenue fell short of the consensus $228.97 million Wall Street estimate as reported by Thomson Reuters, but the company made solid progress ramping up both sales and production during the quarter.

NIO is based in China and reports its results in yuan. But because its stock is listed in the United States, it provides U.S. dollar equivalents for key figures in its earnings release using the exchange rate that was in effect on the last business day of the third quarter, Sept. 28 ($1 = RMB 6.8680). Results in the chart are shown in U.S. dollars, calculated at that exchange rate. 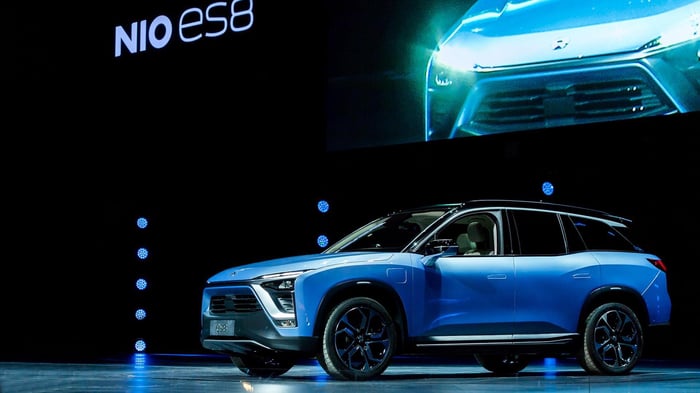 NIO is in the process of ramping up production of its first model, an electric SUV called the ES8. Image source: NIO, Inc.

What happened at NIO in the third quarter

NIO's first production vehicle, an upscale electric SUV called the ES8, went into production in June at a factory owned by Chinese automaker JAC Motors, near Shanghai. NIO was able to produce 500 ES8s and deliver 100 in the last few days of June. Not surprisingly, it improved on those numbers considerably in the third quarter, producing 4,206 ES8s and delivering 3,268 to customers.

NIO's American Depository Shares, each equivalent to one share of the company, began trading on the New York Stock Exchange on Sept. 12. The initial price was $6.26, near the bottom of the company's hoped-for range, raising about $950 million net of fees. The shares have had a bumpy ride so far. 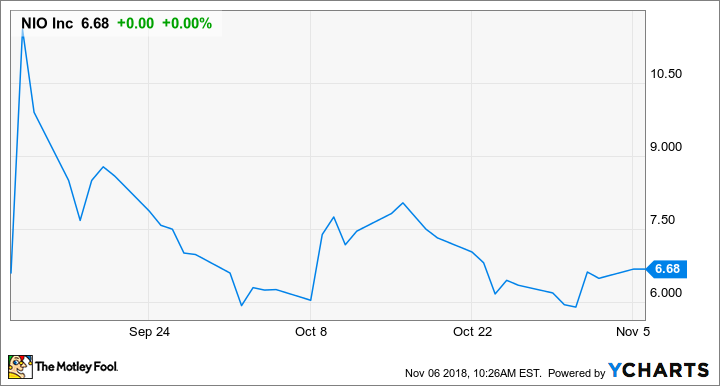 Of note: NIO's shares jumped 22% on Oct. 9 after fund manager Baillie Gifford & Co. disclosed in a regulatory filing that it held an 11% stake in the company. Baillie Gifford is a major investor in Tesla (TSLA 2.90%); investors are clearly hoping that NIO's shares follow the path blazed by those of its larger rival.

Here's what NIO expects to report for the fourth quarter of 2018.