Online luxury fashion marketplace Farfetch (FTCH -7.30%) beat analyst revenue expectations for its first quarter as a publicly traded company, even as losses widened to $77.2 million. Yet with the number of active customers expanding, along with the gross value of the merchandise sold, Farfetch believes it has a chance to become a personalized, global luxury fashion experience.

Because the online marketplace focuses on the upscale end of the market, its asset-lite business model should allow it to scale up, attracting more luxury retailers and giving customers an opportunity to assemble their own high-end collections from a variety of designers. Yet because there remain a number of risks to its business, there could be limits to just how far Farfetch can grow. 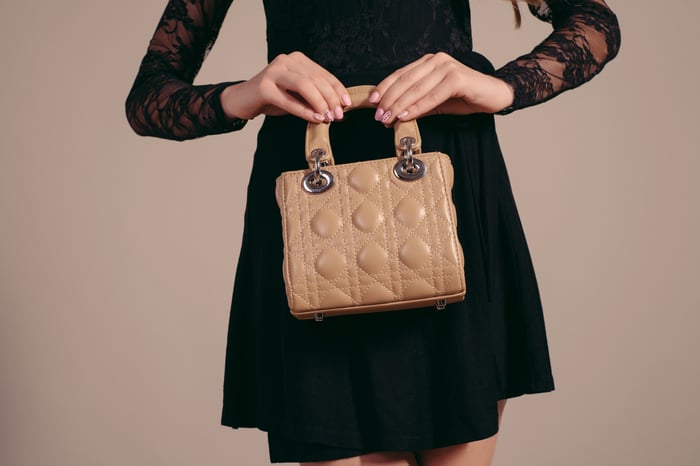 Revenue in Farfetch's third quarter of 2018 rose 52% to $132 million as the retailer added almost 100,000 active customers sequentially to reach a total of over 1.2 million. This 9% growth in Farfetch's customer base is fairly consistent with its growth patterns in prior periods.

The number of orders customers placed also rose, up almost 53% from the third quarter of 2017, but the average order value eased back 3% due mostly to currency effects. Farfetch also saw its take rate, or the amount it earns from commissions, decline sequentially from 32.4% to 31.9% as it added a number of larger retailers that are able to negotiate better rates. Earlier this year, Burberry signed on as a third-party retailer, and it credited Farfetch for helping grow its digital sales.

As a result, though, Farfetch is expecting its take rate to decline for the rest of the year and to end 2018 somewhere between 29% and 31%. Its long-term take rate goal is around 30%, but that might be difficult to maintain as competition grows.

Angling for the well-heeled customer

Farfetch is competing in a crowded field. Yoox, for example, is a much larger online luxury fashion site, while individual retailers such as LVMH have their own portals. Amazon.com is also making a push into fashion, though mostly through its own private label brand and not at what could be considered luxe level. Should Amazon move into higher value goods, however, it could upend the current status quo.

StitchFix is also leaving a mark in the space, one which caught Farfetch's stock in the downdraft after the personalized styling service posted disappointing customer growth numbers. And then there are newcomers to the field, like upstart Garmentory, which started out as a Priceline-like site with a name-your-own-price business model but has since switched over to a largely fixed-price structure.

To establish itself and combat new incursions, Farfetch has pushed for expansion, securing partnerships with major brands and entering new markets. It's teamed up with Chinese online e-commerce giant JD.com, as well as with The Chalhoub Group in the Middle East.

No profits in sight

Yet investors can't ignore the losses Farfetch is building up, a somewhat surprising development for this self-described tech company with a low overhead model. Farfetch does continue to invest in its business, which caused its technology spend to grow to 17% of adjusted revenue in the third quarter as it added more tech hires to help meet growing demand. Yet with the take rate continuing to fall, losses may continue to widen.

Farfetch is still in expansion mode and is trying to grab market share. It looks like it's successfully attracting a well-heeled customer base that shows a willingness to spend, but it's also going to need to demonstrate that a platform connecting luxury retailers with buyers can be profitable.

That's not in Farfetch's immediate future and we haven't heard from founder and CEO Jose Neves on how he plans to achieve it. Because he owns all the voting stock of the company, he can bend the company to his will. That means an investment in Farfetch is a bet on Neves continuing to make the smart decisions necessary to achieve this goal.

John Mackey, CEO of Whole Foods Market, an Amazon subsidiary, is a member of The Motley Fool’s board of directors. Rich Duprey has no position in any of the stocks mentioned. The Motley Fool owns shares of and recommends Amazon, JD.com, and Stitch Fix. The Motley Fool has a disclosure policy.