Please ensure Javascript is enabled for purposes of website accessibility
Log In Help Join The Motley Fool
Free Article Join Over 1 Million Premium Members And Get More In-Depth Stock Guidance and Research
By Keith Speights – Nov 25, 2018 at 9:02AM

If you're looking to invest in marijuana stocks, one of the first decision you'll have to make is whether to buy a pure-play marijuana stock or a stock with ties to the cannabis industry but a primary focus in another industry. One top example of the former category is Cronos Group (CRON -5.18%). A good example of the latter is Constellation Brands (STZ -1.58%).

So far in 2018, Cronos Group has turned in a better performance than Constellation has. But the future is more important than the past when it comes to investing. Which of these two stocks is the better pick now? Here's how Cronos Group and Constellation Brands compare. 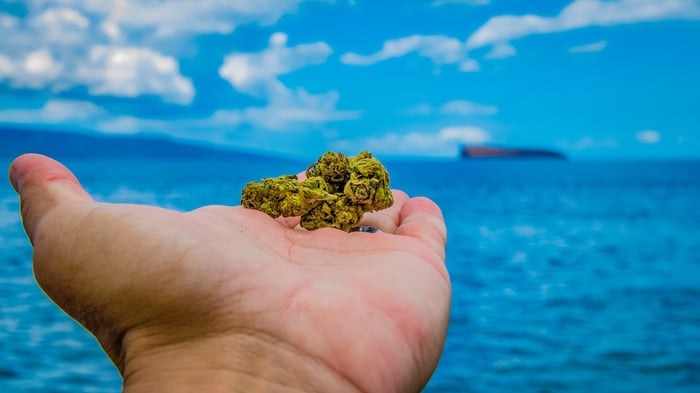 Anyone advocating a pure-play marijuana stock will likely tell you a couple of things. First, they'll say that the global marijuana market is growing like crazy and will be enormous in just a few years. Second, they'll tell you that the marijuana stock they like is positioned really well to capitalize on this huge market. Both arguments appear to apply for Cronos Group.

Cronos Group already ranks as a leader in the Canadian medical marijuana market. The company stood out as the overall winner among its peers in the most recent quarter, with solid revenue growth and a better bottom-line performance despite posting a loss.

Now, Cronos is leveraging that success to make its mark in the country's recreational market as well. The company is selling recreational marijuana products in four provinces that together make up over half of Canada's population. Cronos also has a five-year supply agreement with Cura Cannabis Solutions to provide a minimum of 20,000 kilograms (just over 44,000 pounds) annually.

The company appears to be on track for an annual production capacity of 117,000 kilograms. This level includes 70,000 kilograms per year anticipated from its Cronos GrowCo joint venture's greenhouse facility that is expected to be completed in the second half of 2019.

Perhaps the most important differentiating factors for Cronos Group over the long run are the company's partnerships. Cronos and Ginkgo Bioworks joined forces to produce cultured high-purity cannabinoids from engineered strains of yeast. This initiative could deliver tremendous returns if all goes well. Cronos also partnered recently with Colombian agricultural company Agroidea. This deal gives Cronos a bigger footprint in the Latin American cannabis market.

So what would proponents of stocks with ties to marijuana but primary operations outside the cannabis industry argue? Their case would likely hinge on solid prospects for the core business of the company along with even greater growth potential from the company's marijuana investments. And that sounds like a pretty good summary of the investing thesis for Constellation Brands.

Two product lines are most critical to Constellation's beverage success: Corona and Modelo beers. Thanks to these brands, the company is the top high-end beer company in the U.S. and the top imported-beer maker.

Constellation believes that the global marijuana market will top $200 billion within the next 15 years. And it thinks that Canopy Growth will command a market share between 5% and 15% in the U.S. and the rest of the world, with at least a 30% market share in Canada.

If these projections are even in the ballpark of what actually happens, Constellation's current stake in Canopy Growth could generate a lot more revenue in the future than the company makes now from its entire core business. Of course, if the marijuana market grows that much, Constellation is also likely to gain control of Canopy.

With a market cap of only around $1.5 billion, Cronos Group's share price should have a lot of room to run if the global marijuana market expands as many expect it will. For investors looking to hit a home run, Cronos might be the better pick.

On the other hand, swinging for the fences often results in striking out. Constellation Brands arguably gives investors a higher chance of scoring. The company's core alcoholic beverages business is in good shape. Constellation's investment in Canopy is kind of a lottery ticket -- albeit an expensive one -- that could pay off tremendously. In addition, Constellation's dividend yield of 1.5% provides a nice boost to the stock's total return.

My personal investing style is geared toward playing the percentages. As a result, Constellation Brands gets the nod as the better marijuana stock. However, I wouldn't throw shade on Cronos Group's prospects over the long run.