Please ensure Javascript is enabled for purposes of website accessibility
Log In Help Join The Motley Fool
Free Article Join Over 1 Million Premium Members And Get More In-Depth Stock Guidance and Research
By Daniel B. Kline – Updated Nov 25, 2018 at 9:36AM

In a strong labor market it's becoming more common.

More is not always better. Sitcoms, for example, have taught us that having two dates on the same night just creates chaos. It's nice to have choices, but how we handle those choices can have long-lasting ramifications.

When people search for a job, most cast wide nets. The goal is to land as many interviews as possible in order to secure a good offer.

In this economy, however, many professions are job seekers' markets, meaning it's not unheard of for someone to receive multiple offers at the same time. That's an enviable position, and it's one that gives you the opportunity to negotiate.

That does not mean you're home free. Handling two offers wrong can lead to no job. That's a worst-case scenario, but it can happen if you don't do a few simple things. 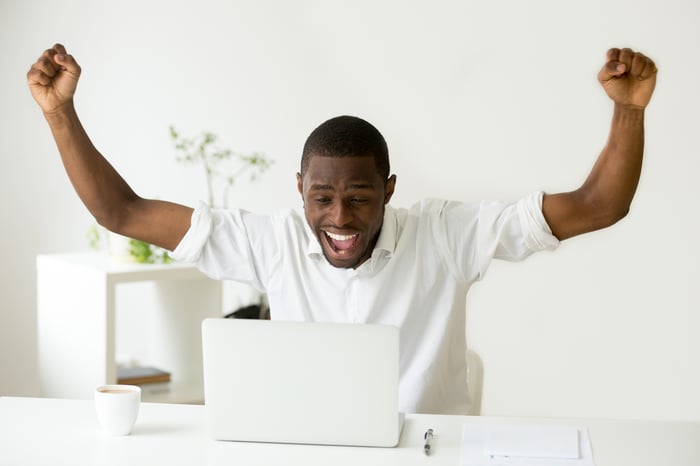 Multiple job offers are a reason to be excited. Image source: Getty Images.

Having two offers allows you to negotiate, which makes sense if the two jobs are equal. If you want one more than the other, you can still use that leverage -- but you don't want to end up having to take the job you want less.

If the money, benefits, and other terms are pretty equal, it makes sense to ask for a little more -- maybe the ability to work from home once a week, or a little more money. Don't, however, pass on a better job because of something small.

When everything is equal

What happens when you like both jobs and the offers are roughly the same? That's when it's smart to tell the recruiter what the situation is. You can even be specific as to where the offers are coming from if both companies carry similar levels of prestige.

Be careful, though. You never want to appear to not want to work at either company. You also have to be wary of asking for something from both employers, and then having to say no to one even after getting it.

It can be hard or uncomfortable to turn down a job, especially if the employer met your demands. You still have to do it.

Once you make your decision, you have two choices. You can decline one job before formally accepting the other by saying exactly why. "All things were equal, but they offered me an extra week of vacation and help paying for child care."

That's essentially one last request for a counteroffer. If one is offered, you can go back to the other employer -- but again, you should be careful about pushing too far.

Once you make a final decision, tell the losing player. Say thank you and express a desire to work together in the future.

You may have leverage now, but you don't know what the future holds. It's important to be respectful of the process and everyone involved. You want the person whose job you passed on to be interested in hiring you down the road. That may be for a hard-to-get promotion, or some as-yet-unrealized dream job.

Treat people as you would expect to be treated. Be honest and upfront. Try not to lead anyone on in a way that will have them feeling like you had accepted and then backed out.

That's not always easy, and hurt feelings are possible even if you do everything right. Still, most people can tell when you're trying to do the right thing, and that's the smart play -- you never know who you will meet again.