Please ensure Javascript is enabled for purposes of website accessibility
Log In Help Join The Motley Fool
Free Article Join Over 1 Million Premium Members And Get More In-Depth Stock Guidance and Research
By Leo Sun – Nov 26, 2018 at 8:19AM

The struggling company still isn’t giving up on smart glasses.

Snap's (SNAP -7.36%) Spectacles, which allowed users to capture photos and videos for Snapchat, flopped after its initial launch in late 2016. Snap eventually took a $40 million write-down on unsold Spectacles last year, then baffled investors by introducing a pair of second-generation Spectacles this April.

The second version was lighter, came in more colors, added the option of mirrored lenses, and removed the bright yellow ring around the camera, but its price tag of $150 also made it $20 pricier than the original. Snap reportedly reduced the initial production of the second-generation Spectacles to about 35,000 units earlier this year, which indicated that the device didn't appeal to mainstream Snapchat users. 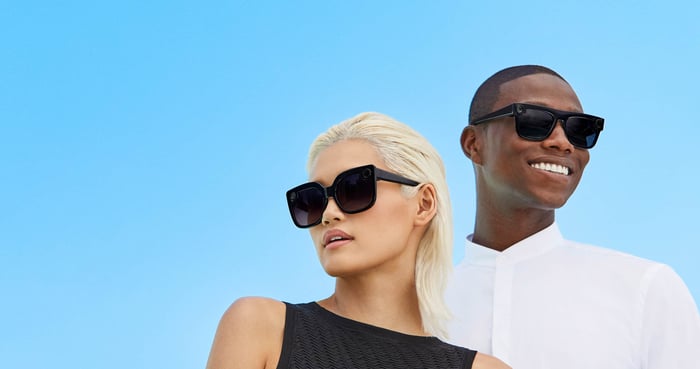 In late July, Spectacles chief Mark Randall resigned amid a flurry of executive departures. This seemed to indicate that Snap's dream of selling smart glasses was finally dead and that it would focus more on strengthening its core app, expanding its digital ecosystem, and cutting costs.

However, a recent report from Cheddar claims that Snap will launch a third version of Spectacles by the end of the year. The device, which will reportedly cost $350, will sport two cameras and overlay AR filters over captured photos and videos. Cheddar claims that Snap only plans to make about 24,000 pairs of the pricier Spectacles, possibly to test the waters and avoid another major write-down on unsold devices.

What is Snap thinking?

Investors are avoiding Snap, which trades about 60% below its March 2017 IPO price, for three main reasons. First, Snapchat's growth in DAUs (daily active users) has stalled out with sequential declines over the past two quarters. The dip was mainly attributed to tough competition from Facebook's (META -4.44%) Instagram, which cloned most of Snapchat's popular features, and an ill-advised app redesign that alienated the company's core users.

Second, Snap remains deeply unprofitable. Its net loss of $325 million last quarter marked an improvement from its loss of $443 million a year earlier, but it still lacks a path toward profitability.

Lastly, Snap's stock remains expensive at 7 times this year's sales -- which greatly reduces the chances of a buyout from a larger company.

Snap's core strategy has been to grow its average revenue per user (ARPU) with programmatic (automated) ads and new features like its Snappable AR games, which let users "catch" eggs with their mouths or "lift" weights by moving their foreheads. Snap's ARPU rose sequentially over the past two quarters, but that growth was mostly attributed to the automated ad buys (in which Snap sold larger quantities of cheaper ads) than AR games or other features like original videos. 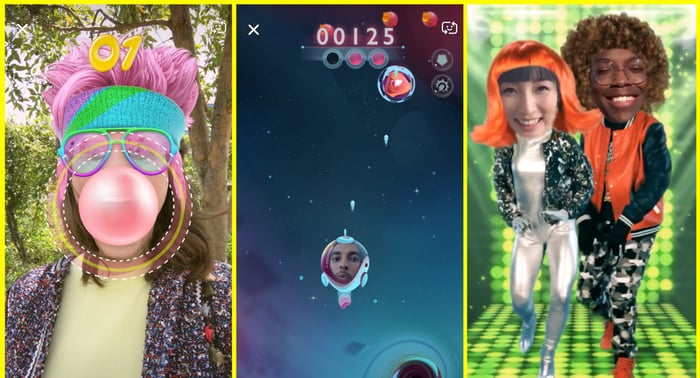 Nonetheless, Snap CEO Evan Spiegel believes that AR devices and features represent the future of Snapchat. In an internal memo, Spiegel described a focus on "three core building blocks of augmented reality: understanding the world through our Snapchat camera, providing a platform for creators to build AR experiences, and investing in future hardware to transcend the smartphone."

But here's the problem...

Snap's Snapchat filters and Snappable games are already AR experiences, and the Spectacles seem like a natural way for the company to extend its reach beyond smartphones. Unfortunately, this push ignores several obvious headwinds.

Facebook and Google are also expanding into the AR market. Facebook recently added AR games to Messenger's video chat, and Google is reportedly developing its own AR headset to challenge HoloLens. Snap also seems to ignore the fact that most people use Snapchat to take photos and videos of themselves instead of other people.

Lastly, the device's $350 price tag -- which is more expensive than game consoles or mid-range smartphones -- is simply too high for a niche product aimed at Snapchat's younger audience, especially when cheaper versions have already failed. Unlike Microsoft and Google, Snap can't simply pivot away from mainstream consumers and try to sell its AR devices to enterprise customers.

The good news is that Snap's initial order for the third-generation Spectacles is tiny compared to the 800,000 units of the first-generation Spectacles it previously ordered. This means that it should avoid another massive write-down even if it barely sells any units. However, investors should also wonder why Snap keeps chasing this market when it could invest more cash into the growth of its core advertising platforms instead.

Why Snap Stock Is Handily Beating the Market This Week