Pick up shares of these three incredible businesses before they rebound.

Given the stock market's steep pullback from record highs early last month, many promising names in the technology sector have endured more than their fair share of pain. But with the caveat that nobody knows exactly where the market is headed from here, it raises the question of whether the drop has created any attractive buying opportunities.

So we asked three Motley Fool contributors to each pick a tech stock they believe investors would do well to buy now. Here's why they like Facebook (META -0.54%), Extreme Networks (EXTR 1.16%), and Amazon.com (AMZN -1.57%). 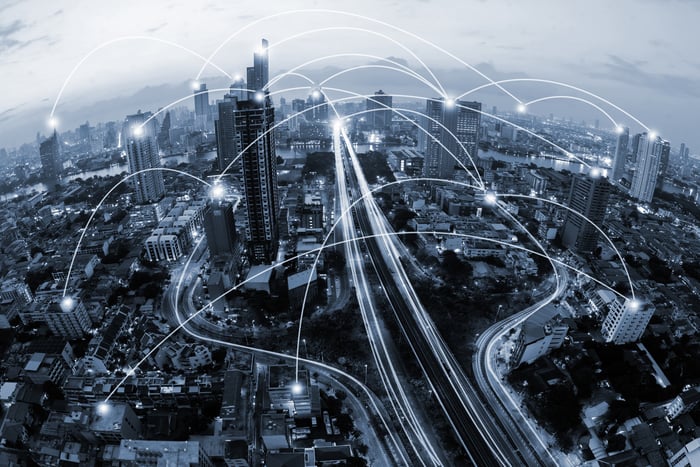 Facebook's terrible year is a gift (for long-term investors)

Steve Symington (Facebook): It seems an understatement to say Facebook shareholders can't wait to put the past few months behind them. Shares of the social media titan have fallen nearly 40% from their peak at the end of July, driven by concerns of decelerating growth and more recent calls for a management shakeup.

But keeping in mind that more than half of the world does not yet have access to the internet -- something Facebook is helping to solve through its internet.org initiative -- the company continues to invest in building its infrastructure with long-term growth in mind. Next year alone, Facebook is planning to increase its capital expenditures by more than a quarter to as much as $20 billion in an effort to "put in place adequate capacity ahead of [its] needs."

This should position the company nicely to continue gradually building on its base of nearly 2.3 billion (yes, with a "b") monthly active users. As Facebook and its other fast-growing platforms (namely Instagram and WhatsApp) continue to grab an outsized slice of new digital advertising spending going forward, it has the chance to prove its brands are more durable than skeptics fear. If that happens, and with shares currently trading at just 18 times this year's expected earnings, the stock could rebound with a vengeance for investors who buy now.

Anders Bylund (Extreme Networks): Two years ago, you would have been forgiven for writing Extreme Networks off as an old-timer in a rapidly changing industry. The buyout binge of 2017 changed all of that, and the Extreme you see today is a legitimate challenger in the increasingly vibrant data center networking market.

Yet, the stock has dropped 56% lower over the last 52 weeks. Investors focused on the company's falling bottom-line earnings seemed to conclude that the cobbled-together networking business is falling apart.

That's a big mistake, and Extreme Networks is actually a strong buy at these low share prices.

Let's put it this way: Analysts expect Extreme's earnings to skyrocket 40% higher next year, and the stock is trading at just eight times those forward estimates. That's a bargain in my book.

And that's no idle speculation, either. Sector giant Cisco Systems (NASDAQ: CSCO) recently crushed Wall Street's first-quarter estimates thanks to fantastic results in the data center market. That's good news for the networking market as a whole, but particularly solid tidings for data center experts such as Extreme Networks.

Extreme's own first-quarter results showed similar market trends, getting the stock started on a well-earned rebound earlier this month. The company even started a $60 million share buyback program to take advantage of the current bargain-bin share prices.

This stock is going places, and soon. This would be a great time to start a position in Extreme Networks.

Chris Neiger (Amazon.com): Over the past three months, Amazon's share price has taken a big hit, as have many tech stocks. However, the stock has still gained nearly 30% over the past 12 months. Skittish investors may see the pullback as a sign to stay away, but savvy investors should see it at as an opportunity. Here's why.

First, Amazon's created a robust ecosystem of products and services within its e-commerce businesses that are difficult to replicate by its peers. The company has about half of all American households signed up for Prime membership, and its growing number of tablets and smart speakers keep customers hooked into buying products from its website.

Secondly, Amazon has also built itself into the dominant public cloud computing platform over the past several years, with its Amazon Web Services (AWS). Amazon leads Microsoft and Alphabet's Google in the cloud computing market, which will be worth an estimated $302 billion by 2021. That lead means that Amazon should benefit the most from cloud computing in the coming years compared to its peers, and its AWS segment is already much more profitable of a business than Amazon's e-commerce segment.

And finally, if you've heard the cloud computing and e-commerce storylines before, you might be interested in Amazon's latest growth opportunity: advertising. While Facebook and Alphabet dominate the U.S. digital ad space, Amazon is now the third-largest digital ad platform in the country. The significance of that hasn't yet been fully realized, particularly when you consider that operating income from Amazon's ad business could surpass that of AWS in 2021.

Investors looking for a tech stock that's slightly cheaper at the moment -- but still has tons of room to grow its business and its share price -- should consider Amazon right now. The latest pullback from investors is opening up an opportunity for long-term investors that's likely to pay off down the road.

Grab some shares and stay awhile

Nobody can guarantee that these three stocks won't fall even further in the near future, especially if the broader market continues its descent. But between Facebook's enormous and growing user base and long-term-oriented investments, Extreme Networks' bargain-priced stock and impending earnings growth, and Amazon's enviable, fast-growing ecosystem of products and services, our three contributors believe the stocks are poised to handily beat the market over the long term -- and think you would do well to put your money to work accordingly.