Amazon.com's (NASDAQ:AMZN) growth story has been called into question recently. Shares were slammed after the company's third-quarter earnings release in October -- and the stock has continued to fall. The Street was disappointed in the company's guidance for significantly slower revenue growth in Q4.

Of course, this disappointment was more a function of high expectations than poor performance. The pace of growth is still significant, with third-quarter revenue rising 29% year over year.

By the looks of it, droves of customers continue to turn to Amazon for their shopping; the company just put another record shopping weekend under its belt during the Turkey 5, or the five shopping days starting with Thanksgiving and continuing through Cyber Monday. 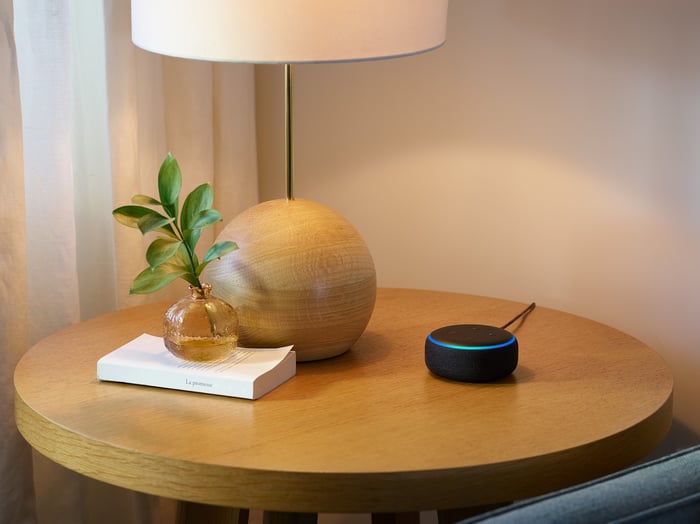 Of course, it shouldn't be a surprise that demand for these products was high. The company announced its biggest lineup ever of new Amazon devices in September, including new versions of its Echo Dot, Echo Plus, and Echo Show, among others.

3. The new Echo Dot was the best-selling product on Amazon

It was the best holiday weekend ever for Echo devices, Amazon said, "with millions sold worldwide." The third-generation Echo Dot did particularly well, coming in as Amazon's best-selling product globally -- even when including products from all manufacturers and in all categories.

This builds on the product's success last Cyber Monday, when Amazon's second-generation Echo Dot was the company's best-selling item.

5. Smart-security products had a good weekend

Smart-security device makers Ring and Blink -- both owned by Amazon -- saw sales more than double over the holiday weekend compared to the same weekend last year. The two brands' momentum suggests Amazon's acquisitions of these smart-security companies are paying off.

Based on these takeaways, Amazon seems to have enough momentum heading into the holidays to be able to meet its guidance for fourth-quarter net sales to rise 10% to 20% year over year.