Which of these value stocks is the smarter choice for investors today?

The chip industry is highly cyclical. That's a worrisome fact when considering that the industry has been in expansion mode for many years. Fears of an upcoming slowdown have caused a number of chip stocks to get crushed.

Skyworks Solutions (SWKS 0.72%) and Qualcomm (QCOM 0.89%) are two chipmakers that have been tossed in the discount bin. Valuations for both companies are well below the S&P 500 in general.

Which of these two chipmakers is the better bet for investors today? 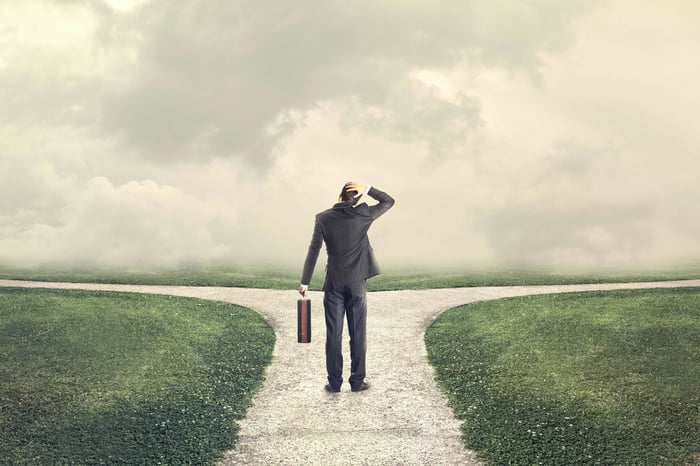 The case for Skyworks Solution

Skyworks Solutions was a hidden winner in the smartphone boom. The company makes specialty chips that are used in connectivity and it counts both Samsung and Apple as key customers. Skyworks' revenue and profit exploded right along with the demand for the iPhone and Galaxy smartphones. Shareholders have enjoyed a 1,400% gain over the past decade in response to the prosperity.

The downside of being attached to the hip of these two industry giants is that a weak product release can greatly impact the company's financials. Skyworks' ultra-fast growth rates have all but evaporated over the last year as smartphone unit volume growth has slowed. Management even told investors that the challenges were going to persist for the remainder of the year. That fact has put a lot of pressure on the company's stock.

Thankfully, investors can point to some big opportunities on the horizon that could drive Skyworks next phase of growth. The upcoming rollout of 5G cellular networks should create enormous demand for the company's chip. Billions of new devices are expected to come online as the Internet of Things tech megatrend warms up, too.

Management has been doing everything it can to take care of investors while they wait for those growth drivers to kick in. The company has been buying back stock aggressively and plowing excess capital into a fast-growing dividend. Shares yield more than 2% right now and the dividend only consumes about 26% of net income. That suggests there's plenty of room left for continued growth.

In spite of the near-term headwinds, market watchers project that Skyworks' profits will grow in excess of 10% annually over the next five years thanks. That's quite strong for a company that is trading for less than nine times next year's earnings estimates and boasts a debt-free balance sheet.

Qualcomm has also been a key supplier to the smartphone industry for many years, but its investors haven't really benefited from the boom. Qualcomm's stock is only up 70% over the past decade, a return that badly lags the S&P 500. 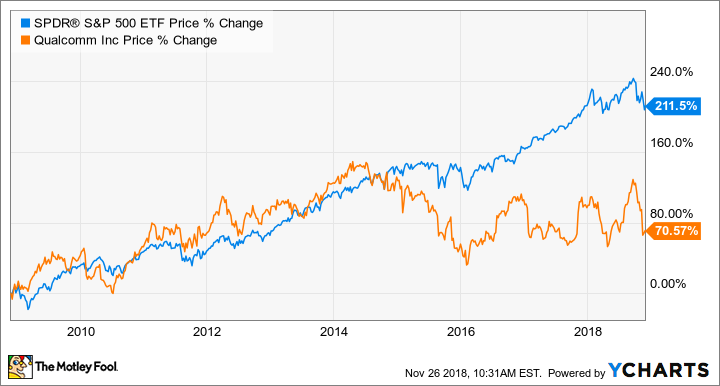 A key reason for the underperformance is that Apple has been actively distancing itself from Qualcomm in the last few years. The two companies are also currently engaged in a massive legal battle, which isn't exactly good for business. Apple has become so disgruntled with Qualcomm that it didn't even make the cut in any of the 2018 iPhones. Instead, that book of business has gone to Qualcomm rival Intel. The customer defection has put the hurt on the company's financial statements.

To add insult to injury, Qualcomm hasn't been successful on the M&A front, either. The company rejected a takeover bid by Broadcom and also failed to acquire NXP. The latter cost the company $2 billion in breakup fees.

Qualcomm authorized a $30 billion buyback plan in the wake of the NXP debacle in an effort to try and please investors. That's a massive number when considering that the market cap of the whole company is only $67 billion right now.

Wall Street projects that Qualcomm's massive buyback and the upcoming transition to 5G will still enable the company to post earnings growth in excess of 10% annually over the next five years. Dividend investors will also love the company's current yield of 4.5%. Those are tempting numbers when considering that the stock is currently trading around 12 times next year's earnings estimates.

On the flip side, Qualcomm's balance sheet has a net-debt balance of $4 billion. The dividend will also consume 63% of estimated adjusted profits this year. With management calling for so much capital to be funded into stock buybacks, there might not be any room left for dividend hikes even if its profits rise.

If you believe that both companies are poised for double-digit earnings growth over the next five years, then there's an argument to be made that you can't go wrong with either stock. However, I don't think that Qualcomm's $30 billion buyback is the best use of capital when its balance sheet is already packed with debt and its core business isn't performing well.

Meanwhile, Skyworks sports a debt-free balance sheet, has a super-low dividend payout ratio, and is trading at a cheaper valuation. Those factors make me believe that Skyworks is the better deal by far.