This year’s Foolanthropy drive aims to get kids in a disaster-stricken community back to school.

Last year this time, the severe impacts of hurricane season were top of mind. Hurricanes Harvey, Irma, and Maria proved the most ferocious, but the entire Atlantic hurricane season resulted in record-breaking damage to the tune of more than $200 billion in the U.S. Understandably, many philanthropic efforts -- including here at The Motley Fool -- focused on hurricane-related relief and rebuilding.

Sadly, though, that also meant that some tragic natural disasters across the world just didn't garner the attention they deserved. For example, while we watched hurricanes churn in the Atlantic and make landfall with disastrous effects, multiple strong earthquakes struck Mexico last September, resulting in more than 300 dead, 1,900 injured, and 2 million directly affected. The financial impact is estimated at $2 billion; to add a little more perspective, 184,000 homes and 16,000 schools were destroyed or damaged.

The media tends to cover disasters as they happen, then quickly move on to other current events. However, the reality is that it takes years, not days or weeks or even months, for communities to recover and rebuild after massive catastrophes like these.

That's why we here at The Motley Fool are circling back to give Mexican schoolchildren a helping hand this holiday season, and we're partnering with All Hands and Hearts -- Smart Response to do that.

Visit give.fool.com if that's all you need to know, and you're ready to support All Hands and Hearts' efforts in Mexico right now. Note that on Giving Tuesday (Nov. 27), up to $115,000 in donations will be matched by All Hands and Hearts co-founder David Campbell and board member Mike Pehl, in effect doubling your donation's impact. Read on for more details about the campaign.

For those of you who are long-standing members of the Motley Fool community, you probably remember that last year's Foolanthropy holiday campaign partnership supported All Hands and Hearts as well.

Having thoroughly vetted the organization -- Motley Fool employees have volunteered through All Hands and Hearts in Texas, Puerto Rico, and Louisiana over the last several years -- our Foolanthropy team decided that a holiday drive partnership with All Hands and Hearts a second time, focused on fundraising for rebuilding in Mexico, would be a great and impactful use of philanthropic dollars as 2018 draws to a close. 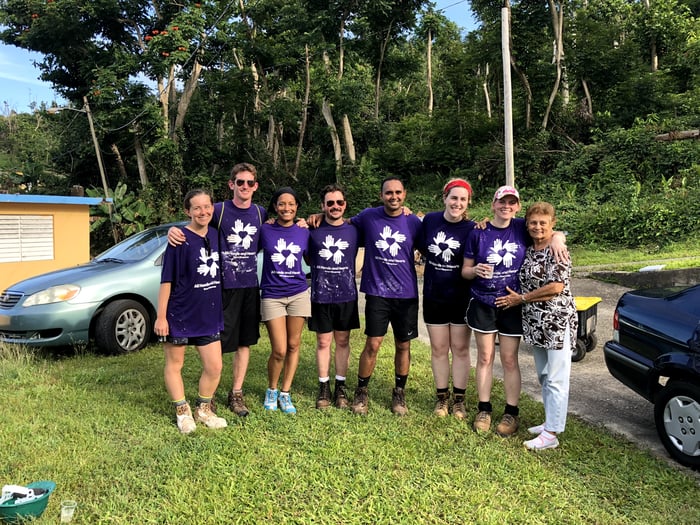 Motley Fool employee volunteers with an All Hands and Hearts rebuilding recipient in Puerto Rico. Image source: The Motley Fool.

All Hands and Hearts specializes in mobilizing volunteers to rebuild after natural disasters both domestically and internationally. The organization has earned a coveted four-star rating from Charity Navigator five years in a row.

Through its global volunteer network, All Hands and Hearts can respond rapidly to disasters around the world, and scale its impact as it works to rebuild a variety of structures, including homes and schools, and in doing so, ultimately rebuild communities.

One of its most appealing attributes is that it focuses on the long-term sustainability of the communities it ventures into, with projects that can take years to complete. As co-founder David Campbell told us last year, "We come early and stay late."

Last but not least, it's a financially transparent and effective organization; $0.95 of every dollar spent by All Hands and Hearts is used on programs.

Getting kids in disaster zones back to school

This year's Foolanthropy campaign emphasizes an element The Motley Fool holds dear: education. Over the course of its history, All Hands and Hearts has rebuilt 238 schools and sent more than 108,000 students in disaster-ravaged communities back to school, and we want to be part of that effort.

We've targeted a specific project, too. Funds raised this year are earmarked for rebuilding Celso Muñoz Primary School in Oaxaca State, Mexico, which was destroyed by earthquakes last September.

Over a 10-year period, more than 400 students will directly benefit from the building of this safe learning environment, which, in an added bonus, will be constructed to disaster-resilient standards.

Our base fundraising goal this year is $80,000, but we'd love to hit our $100,000 stretch goal or even our $125,000 super-stretch goal to help address Celso Muñoz Primary School's funding needs as much as possible. Our aim with these amounts is to cover as much of the existing funding gap for the school as possible.

Stay tuned for more updates throughout the holiday season, but on this Giving Tuesday, you can help us get this year's campaign off to a strong start by visiting give.fool.com and pitching in with a contribution.