After Apple (NASDAQ:AAPL) shares declined significantly from their peak following underwhelming guidance and negative supply-chain data points around its latest iPhones, Apple and software giant Microsoft (NASDAQ:MSFT) are now locked in battle for the title of the most valuable publicly traded company by market capitalization.

What's interesting, though, is that while investors think that both of these companies are worth about the same, Microsoft shares trade at just under 25 times expected fiscal 2019 earnings while Apple trades at under 13.4 times what analysts think it'll generate in its own fiscal 2019. Put another way: Apple makes more money than Microsoft does, but investors are willing to pay more for each dollar of Microsoft's earnings than they are for Apple's. 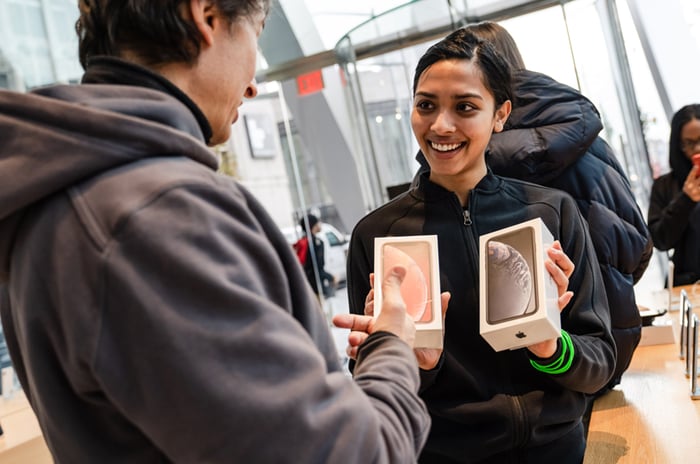 Here, I'd like to offer two reasons that Microsoft, indeed, deserves a richer valuation than Apple does.

Microsoft is a more diverse business

Microsoft is a diverse business. It's the leading vendor of PC operating systems; it dominates the productivity software market with its Office products; it's a leading player in gaming with its Xbox franchise; it runs a highly successful cloud computing business; and more.

The software giant groups its various product lines into three reporting segments: "more personal computing," intelligent cloud, and productivity and business processes. These segments made up 38.3%, 29.2%, and 32.5% of the company's business and saw sales growth of 8%, 18%, and 20%, respectively, in the company's fiscal 2018.

Not only is Microsoft's business diversified, but each of its reporting segments performed well last year. The company is anything but a one-trick pony.

Apple, on the other hand, derives a large percentage of its sales -- about 62.8% in its fiscal 2018 -- from its iPhone product line. When that business does well, as it did in the company's fiscal 2018, that can drive significant revenue and profit growth. However, if that business falls flat -- and the reports of iPhone production cuts, along with 3D sensing chip supplier Lumentum's recent dramatic downward guidance revision less than two weeks after issuing the original guidance, aren't good signs -- Apple's entire business may be adversely affected.

Now, to be fair, Apple doesn't only sell the iPhone. It has a fast-growing services business, and a thriving wearables business driven by the successes of products like the Apple Watch and AirPods. However, those businesses in aggregate only made up about 20.5% of the company's sales in fiscal 2018, so it's difficult for robust growth there to potentially make up for, say, a bum iPhone product cycle.

Apple also sells Mac personal computers and iPad tablets, but these businesses aren't huge and they're not exactly superstars, either. Apple's Mac business made up about 9.6% of its total revenue and declined 1% in fiscal 2018. The iPad was even less relevant at just under 7.1% of sales; it suffered a 2% drop in revenue that year, too. These are hardly the kinds of businesses that'll make investors willing to pay a premium for the stock.

The battle of the growth rates

Another thing to consider is that analyst estimates call for Microsoft to deliver significantly more robust growth over the next few years than Apple.

Now, analyst estimates are subject to change as new data points come in, but right now the collective view of the analyst community is that Microsoft is on track for more robust growth over the next couple of years than Apple is. If you take analyst estimates to be a proxy for general investor expectations, it's little wonder that Microsoft commands a richer multiple than Apple does.