Helmerich & Payne has a long history of rewarding investors with dividends, but its financials are starting to deteriorate.

Helmerich & Payne (HP 0.91%) has been a unique member of the Dividend Aristocrat club. The business of leasing drilling rigs to producers is capital-intensive, cyclical, and hard to predict -- all traits that aren't conducive to steadily increasing dividends. The company's 47-year streak of increasing its payout is a testament to its management team and how it has navigated industry cycles.

This most recent downturn, though, has put the company's payout at risk for the first time in years. Its business hasn't been generating much excess cash, and its reserves on the balance sheet have dwindled. In its most recent quarterly report, Helmerich & Payne reported that its cash on hand has declined by around two-thirds since its most recent peak.

Is Helmerich & Payne's long-tenured dividend streak at real risk? Let's take a look at the company's most recent report and see what could be in store over the next few quarters. 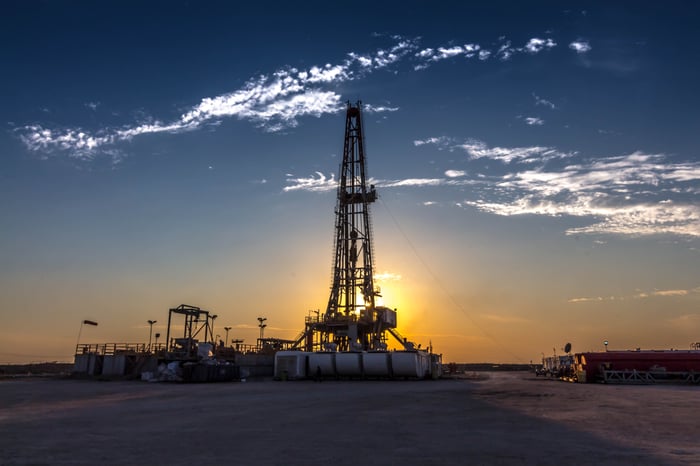 The entire Helmerich & Payne story is related to its U.S. land drilling operations. This portion of the business has the most assets and the most potential for upside. Revenue has been increasing steadily for more than a year as shale producers expanded their production budgets, but profits weren't exactly keeping pace because management was spending heavily to upgrade rigs to be what the industry calls super-spec rigs. These rigs are the ones that have the horsepower to drill the long well lengths for shale wells and have the ability to move from well to well using skids or arms that cut down on downtime.

These investments are paying off because they are in high demand and taking market share. At the end of the quarter, 98% of its super-spec capable fleet was utilized compared to a fleetwide utilization rate of 68%. This increase in utilization and operating profit is what allowed Helmerich & Payne to report its first quarterly profit in over two years. 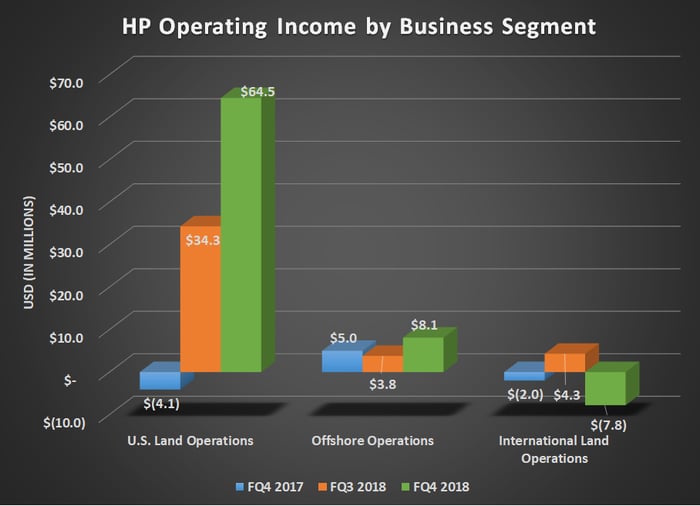 When oil prices started to nosedive back in 2014, Helmerich & Payne's balance sheet looked like it could weather even the worst storms. It had loads of cash on hand and a relatively small debt load. It looked as though its dividend, which had increased every year for more than four decades, was on solid ground.

About four years of lower oil prices and fewer rigs being utilized have taken a significant bite out of that cash pile. Even though the company's operations have generated more cash than its capital spending requirements, it hasn't been enough cash to cover its dividend payments. In a matter of two and a half years, its cash hoard has dwindled from $900 million to $284 million to cover dividends. This isn't enough to cover another year of dividends, and could put the company at risk of a cut.

On the company's conference call, CEO John Lindsay went out of his way to emphasize Helmerich & Payne's financial strength to assuage any concerns about a dividend cut.

Helmerich & Payne had cash on hand of approximately $284 million at September 30, 2018, and short-term investments of $42 million. Including our revolving credit facility availability, our liquidity was approximately $587 million. On November 13, 2018, we extended and expanded our revolving credit facility to $750 million, enhancing our liquidity by an additional $450 million and extending our maturity date to 2023. While we do not currently expect to utilize this facility during 2019, it is a prudent step given our current operating scale and the nature of our industry. Our debt-to-capital at quarter-end was 10%, a best-in-class measurement among our peer group. We have no debt maturity until 2025.

Opportunistic reinvestment in our FlexRig fleet continues to strengthen the asset base while increasing market share. Our U.S. Land market share at the 2014 peak was 15% and has grown to 21% today. Our balance sheet strength, liquidity level, and term contract backlog provide H&P the flexibility to pursue planned reactivation and upgrade programs, develop and deploy differentiating technology, and return capital to shareholders through our very long-standing dividend.

In fiscal 2019, we will consume a portion of our cash on hand. As stated, we do not expect to have to utilize our credit facility availability. Looking ahead in our planning horizon, the investment in our fleet and drilling solutions technologies, coupled with the disciplined and centralized cost focus will yield expanding positive free cash flows.

You can read a full transcript of Helmerich & Payne's conference call here. 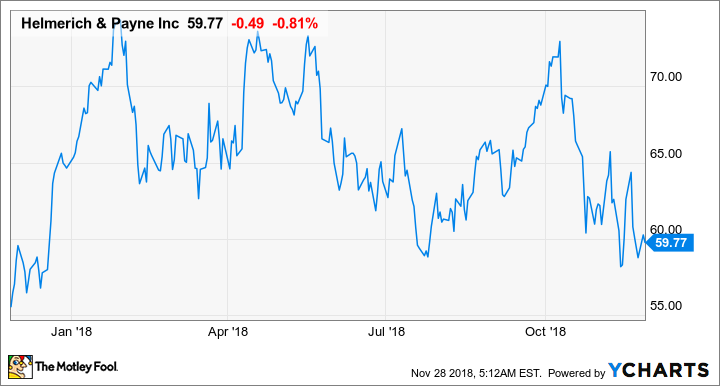 Can it deliver another year of a dividend increase?

With a dividend track record as long as Helmerich & Payne's on the line, management is likely going to do everything in its power to maintain its payout. One thing the company did recently was that it moved some of its debt from the parent company to a wholly owned subsidiary that will hold its offshore and international rig businesses. A move like that hints at the possibility of spinning off or selling these business segments down the road.

In regards to the company's dividend, the most important factor will be drilling activity in the U.S. next year. Another year of robust drilling activity that results in more rigs getting deployed to the field should help boost cash flow, but as Lindsay said, he anticipates the company to draw on its cash reserves again in 2019. If shale drilling in the U.S. hits another speed bump or two in 2019, then a dividend cut isn't that far-fetched.