Apple's (NASDAQ:AAPL) stock price has tanked about 20% over the past three months, which has had the unfortunate effect of erasing nearly all of the company's 2018 share price gains. Investors may be reluctant to snatch up more shares of Apple or invest in the company for the first time because of the recent drop. But it's worth pointing out that the overall market, particularly the tech sector, has taken a hit along with Apple due to fears of a trade war between China and the U.S. and concerns about a possible recession.

Investors who hold a long-term perspective on the market know that fear doesn't build wealth and that just because a company's share price takes a nosedive, it doesn't mean the company is a bad investment. Here are three reasons why investors should still consider buying Apple's shares right now. 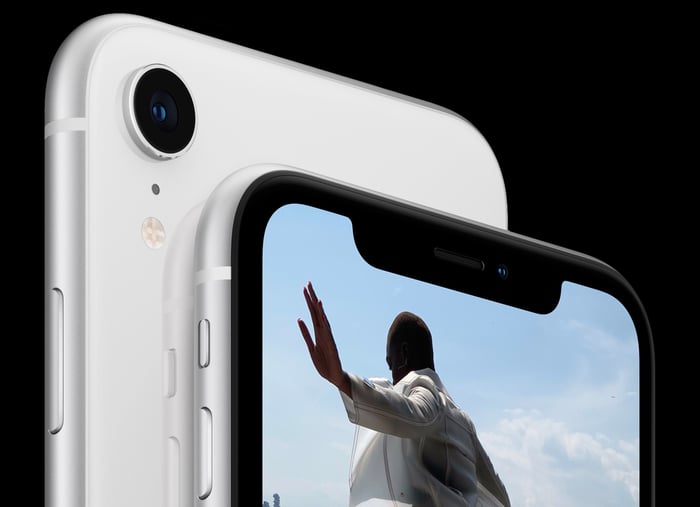 It's no secret that the iPhone is Apple's cash cow. Sales of the device brought in $37.1 billion in the most recent quarter, which accounted for 59% of the company's total revenue. Apple pessimists will point to declining unit sales of the iPhone, and it's a legitimate concern. iPhone unit sales were flat year over year last quarter at about 46.9 million devices.

But stopping there would be a mistake. While increasing unit sales quarter after quarter would be great, Apple is offsetting the lack of strong growth with higher selling prices for its phones. In the most recent quarter, the average selling price (ASP) of an iPhone increased to $793, up from $618 in the year-ago quarter.

Despite its slowing unit sales growth, Apple is figuring out how to get its customers to pay more for its devices. That proves the company's brand still has a very powerful pull on consumers.

The iPhone's continued success isn't the only bright spot at Apple. The company's rising star among all of its segments over the past couple of years has undoubtedly been its services segment. Services include everything from the App Store and Apple Pay to Apple Music, AppleCare, and the company's cloud storage options.

Apple grew its services revenue by 27% in the fourth quarter to $10 billion when you exclude a one-time accounting adjustment of $640 million in the year-ago quarter. That growth isn't just a fluke, either. For the full 2018 fiscal year, services sales increased 24% to $37.2 billion. To put that in perspective, Apple's services segment revenue easily exceeded both its Mac sales ($25.5 billion) and iPad sales ($18.8 billion) in fiscal 2018.

The company now has 330 million paid subscriptions across all of its services -- a 50% jump year over year -- and Apple's management believes there's more room for growth. Luca Maestri, Apple's chief financial officer, said on the most recent earnings call that "we reached [a] new all-time quarterly revenue record for many services categories and we are well on our way to achieve our goal to double our fiscal 2016 services revenue by 2020."

Services are already Apple's second-largest segment by revenue. Based on the segment's stellar revenue trajectory, investors should consider this business a key component of Apple's future growth.

Wearable tech could be huge

Last, but not least, Apple holds the No. 1 position in the wearables market right now, ahead of rivals Xiaomi and Fitbit. Not only is it dominating this space with its Apple Watch, but the company is also growing sales for the other products in its wearables segment, which include AirPods and Beats headphones. In the most recent quarter, sales of Apple's wearables grew 50% year over year.

Apple is on the fourth version of its Apple Watch right now, but investors should keep in mind that the wearable tech space is still in its early stages. Not all of the opportunities to benefit from wearables have been fully realized yet.

One such opportunity for the company could be the possible launch of augmented reality glasses, which could debut in the next couple of years. Gene Munster, who covered Apple as an analyst for years and then started Loup Ventures, wrote earlier this year that he believes Apple will debut AR glasses at the end of 2021 and that the devices will add $13 billion to Apple's top line in 2022.

Of course, Apple doesn't do everything perfectly, and there are areas for improvement (like slowing iPhone sales). However, Apple's core businesses are still humming along nicely. Furthermore, Apple's recent focus on building its services business means that the company is adding ongoing, recurring revenue that will complement device sales.

Additionally, Apple has a lot of potential in the wearable tech space that hasn't been fully realized yet. It may even have a massive opportunity in autonomous vehicle technology as well.