Memory chip maker Micron Technology (MU 4.39%) has been a roller-coaster of an investment recently. Chip prices stabilized and turned upwards in 2016, triggering a golden age where Micron's shares more than quintupled in two years. Next, chip prices started a hesitant downturn, and Micron's stock followed suit.

Today, the stock is trading a heartrending 41% below its 52-week highs (but 245% above the prices seen in early 2016). Critics are coming out of the woodwork, arguing that another brutal price war is under way. So, where will Micron be at the end of 2019?

What's going on with Micron?

I'll admit that my crystal ball needs a cleaning, so you won't see any detailed price targets for either Micron's stock or for its memory chips here. The puts and takes are too murky to pin down any particular values. What I can do is sketch out a directional picture of Micron's relatively short-term future.

The main thing to remember, here, is that it really is different this time. The previous price wars shook out all of the weak hands from a fragmented market, allowing the stronger survivors to buy out their former rivals' manufacturing facilities at deep bankruptcy-deal discounts. Micron was one of those survivors, and the DRAM market has boiled down to a mere handful of those.

Fairly evenly matched in terms of market share and production capacities, none of them really has the power to spark a full-fledged price war on its own anymore. And since two of them -- Micron and Korean peer SK Hynix -- are tightly focused memory producers with few other business lines to speak of, it's simply not in their best interests to allow Samsung (NASDAQOTH: SSNLF) to push down memory prices again.

The falling prices don't stem from an artificial market flooding this time. Instead, the underlying markets for memory-hungry items such as smartphones and enterprise storage systems are taking a break from their solid growth trends. The global economy feels a little shaky as long as Washington and Beijing are flinging trade tariffs at each other, and end users are waiting for game-changing events such as the launch of 5G wireless networks before upgrading that darn phone again. 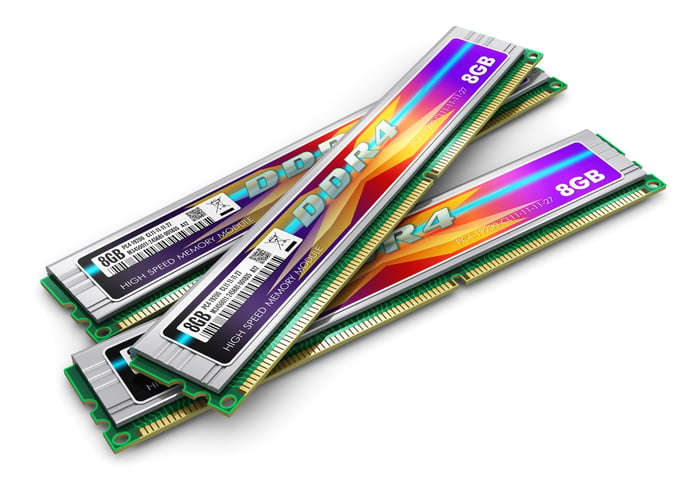 The 1-year forecast, in black and white

These speed bumps will pass, and probably fairly soon. 5G launches are starting early next year, and smartphone sales are likely to soar again when that day comes. That will trigger heavy demand for memory chips again, allowing Micron and friends to once again run their production lines at full speed.

Therefore, I'll be downright shocked if Micron is struggling to show top-line growth and solid earnings a year from now. The stock is plunging for all the wrong reasons, and you might want to buy some while the discounts last.