The last few years have not been kind to the fossil fuel industry. In early 2016, a barrel of oil could be purchased for less than a fast-food meal for four, sending profits and share valuations for many oil companies to money heaven. Prices have staged a strong rebound since, nearly doubling from the summer of 2017 through the early fall of 2018. 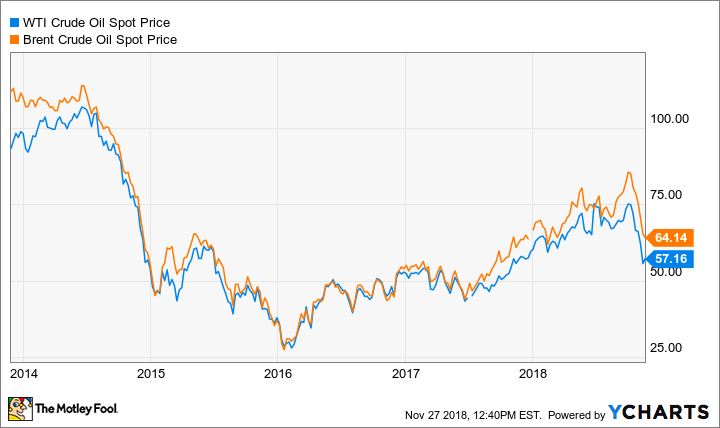 However, the relief provided by higher pricing was offset as oil tanked again starting in October -- blamed in part on record production in Saudi Arabia and the U.S. paired with worries that global economic growth is slowing. Oil drillers are especially sensitive to price swings, and Transocean (RIG -2.81%) is a case in point. The stock has lost over 30% of its value the last two months alone. Things look ugly right now, but the big drop could be spelling opportunity -- assuming oil rebounds.

The offshore drilling sector is especially sensitive to oil prices. That's because it's typically much more expensive than drilling on land, especially in deep water. If spot prices fall too low, rig operators like Transocean can get hit with rig cancellations from customers. With too many rigs sitting idle, the 2015-2016 rout in the energy industry was especially hard on offshore drillers. 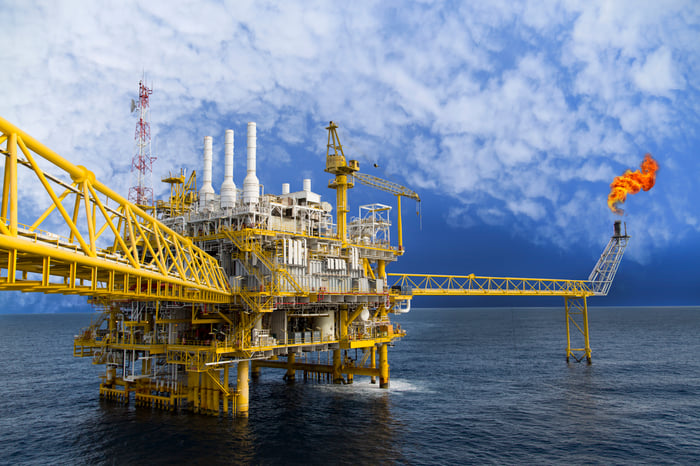 As prices have rebounded from a few years ago, so has activity in the offshore industry as operations at sea have become profitable once again. Transocean's fleet utilization was at 65% at the end of the third quarter, compared with 52% the same period a year ago. However, the steep autumn retreat in energy prices has created worry that contract cancellations might be on the table once again. That explains the fast decline in Transocean stock that started in October.

However, the offshore industry has consolidated since 2016, helping reduce rig counts and giving drill rig operators a little more negotiating power with customers. Transocean scooped up Songa Offshore SE early in 2018, and it more recently announced it will be acquiring Ocean Rig UDW, which would bring its total fleet size up to 57. The latter acquisition will add $743 million to Transocean's $11.5 billion in backlogged work. For comparison, contract drilling revenues in the third quarter were $816 million.

Cheap with an asterisk

Industry consolidation and Transocean's uncompleted contracts help offset worry from declines in oil prices. However, it's worth noting that business in the third quarter occurred with oil still at a recent high-water mark. During that time, Transocean reported a net loss of $409 million.

While profits appear elusive, a little financial legwork reveals that Transocean is in better shape than what might appear. Free cash flow -- money left over after basic operating costs and capital expenditures are paid for -- is positive after backing out non-cash expenses like depreciation and impairment charges on assets. Over the last 12 months, free cash flow is $287 million, giving Transocean stock a price to free cash flow ratio of 14.0. That is a fair price for a company still rebounding, but it is a volatile metric given the high variability of the company's operations.

Another way to value offshore drilling is the price to book ratio -- stock price divided by the difference between assets (like rigs) and liabilities. A ratio of less than 1.0 could mean a stock is a bargain since its assets have not been fairly valued. Transocean and friends in the offshore drilling industry are cheap when using the price-to-book ratio, with the exception of Seadrill, which just recently emerged from bankruptcy.

However, there's a reason these companies are trading at a discount. Transocean, as well as other oil drillers, have to shell out hundreds of millions of dollars to acquire drill rigs, and the cash-generating ability of that equipment has a sketchy track record. Compare that with the profit-generating ability of an industry bellwether like Chevron (NYSE: CVX). 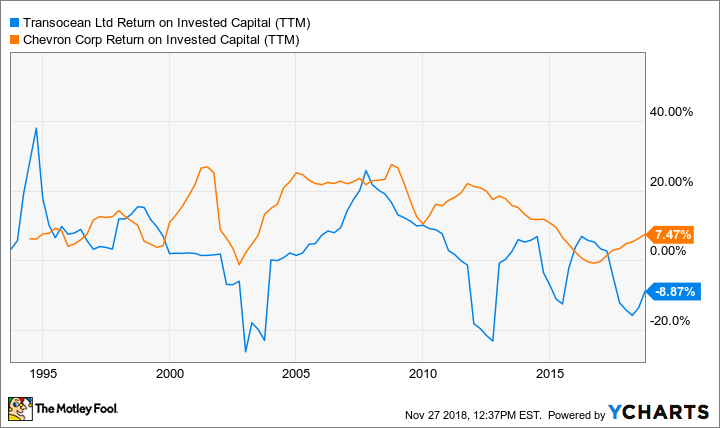 In short, Transocean and its peers act as a proxy on oil prices. Though the industry has consolidated the last few years, contract offshore drilling is still a volatile business. If oil prices go up, the market is likely to reward Transocean with a higher stock valuation -- and vice versa. Thus, if you think the sell-off in oil is overdone, Transocean is a good buy at this point with its strong backlog of work and free cash flow generating operations. Given its history of ups and downs, though, this stock probably isn't a great long-term hold.

Why Transocean Stock Rallied This Week -- and Could Go Higher
411%