On Black Friday, the Trump administration released a major report on climate change, and its predictions are dire. The report, officially titled the "Fourth National Climate Assessment, Volume II," involved 13 different federal agencies and the work of more than 300 scientists.

The worst outcomes predicted are those that will potentially destroy the lives and livelihoods of people across the globe. Thousands of premature deaths are predicted from extreme heat and cold; from diseases that will spread more easily across a warmer planet; and from extreme weather events like floods, hurricanes, and wildfires.

But the report also predicts major economic impacts, possibly reaching hundreds of billions of dollars per year. "Virtually every sector of the economy" is at risk, according to the report, and we are already seeing some of the impacts. Nobody wants to capitalize on the misfortune of others, but it makes sense to factor climate change into your investment decisions. Here are three sustainable companies that may see some positive impacts from the severe weather events caused by climate change. 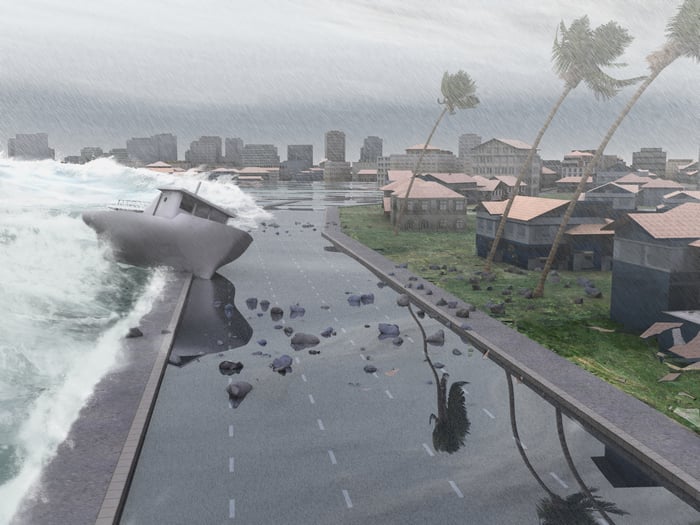 Climate change will have a big impact on the economy, according to a sobering new Trump administration report. Image source: Getty Images.

They also all handle debris pickup. Under normal circumstances, this largely consists of construction debris. But in the aftermath of a major disaster like a hurricane, flood, or wildfire, it consists of cleaning up, well, just about everything.

Recycling or reusing items damaged or destroyed in a flood is next to impossible, thanks to contamination in the floodwater and the risks of rot or mold developing. So virtually everything destroyed in a flood needs to be thrown away. Likewise, burned and charred wreckage from a wildfire isn't usable, and is generally destined for the landfill.

New landfills aren't built for this purpose, so debris is taken to existing ones. Transporting debris to those landfills usually falls to the local trash hauler. And because Waste Management, Republic Services, and Waste Connections are three of the largest trash haulers and landfill operators in North America, the job often falls to one or more of them.

Landfills charge by volume, so a disaster can generate a great deal of revenue for the landfill operator. Similarly, although a burst in pickup activity incurs significant costs for a waste hauler, those costs are usually passed on to the affected municipality through an existing contract. In other words, there's no "price gouging" going on -- the massive increase in volume is what drives the uptick in revenue.

These companies' bottom lines may already be seeing the impact of climate change.

That may not seem like much of a bump, but to put it into perspective, it's more than double the increase that the company saw during the quarter from a new Los Angeles collection franchise and new New York City disposal contracts, which together only resulted in a 60 basis-point increase in overall trash handled.  Q4 2017 was the strongest quarter for price and volume in the company's history. All that trash led to higher earnings, with management estimating that hurricane cleanup increased EBITDA margins by 100 basis points.

If just two hurricanes can have such a catastrophic impact on the communities they strike that they result in such an outsize impact on these companies' businesses, imagine what will happen if the recent climate report is accurate and these types of "severe weather events" become not only more common but more fierce.

About 42% of the U.S. population lives in coastal counties, and the recent flooding in North Carolina from Hurricane Florence even devastated communities far inland.

"In the future," the report states, "Atlantic and eastern North Pacific hurricane rainfall and intensity are projected to increase, as are the frequency and severity of landfalling 'atmospheric rivers' on the West Coast... [which] are associated with severe flooding events in California and other western states." Increases in wildfires and non-storm-related coastal flooding are also likely, and the report even finds evidence that the number of tornadoes may increase.

Such catastrophic weather would make it likely that waste haulers in disaster-prone regions will see higher demand for their services -- and, as a result, higher profits.

Waste Management, Republic Services, and Waste Connections have seen big increases in their stock prices in recent years, thanks in large part to a growing population creating more and more trash. That trend is likely to continue no matter what happens with the climate.

And while these businesses might stand to see some financial benefits from some of the effects of climate change, they are actively striving not to contribute to it. Republic Services is one of Barron's 100 Most Sustainable Companies, and was awarded the 2017 Organics Recycler of the Year Award by the National Waste and Recycling Association. Waste Management received a 100% score on the RobecoSAM Corporate Sustainability Assessment for Climate Strategy and is listed on the 2018 Dow Jones Sustainability Index. Waste Connections helped to found the Global Waste Research Institute, which develops sustainable waste management processes and technologies.

Severe weather events generate debris that has to be removed and landfilled, and these three companies provide this much-needed service to the affected communities. If you're looking to offset some of the impacts climate change may have on your portfolio, these stocks are excellent places to start.