Apple (NASDAQ:AAPL) has hit a small bump in the road. The company saw its shares fall when rumors became rampant that its new phone models weren't selling well. These fears were based on reports from component providers and other speculative sources.

Any rumors about the iPhone -- which accounts for over 50% of the company's sales volume -- have the power to rock the company's share price. It doesn't really matter what's true. It seems that at some point, the mighty always fall, so the iPhone, which has been a dominant player since it was introduced in June 2009, seems primed for a fall.

In reality, even if Apple had a small production slowdown, nothing has changed about the company's position in the market. There has not been a major shift in consumer behavior, and no new competitor has emerged. This is not a time to panic, and it's certainly not a time to sell. In fact, it's actually a buying opportunity. 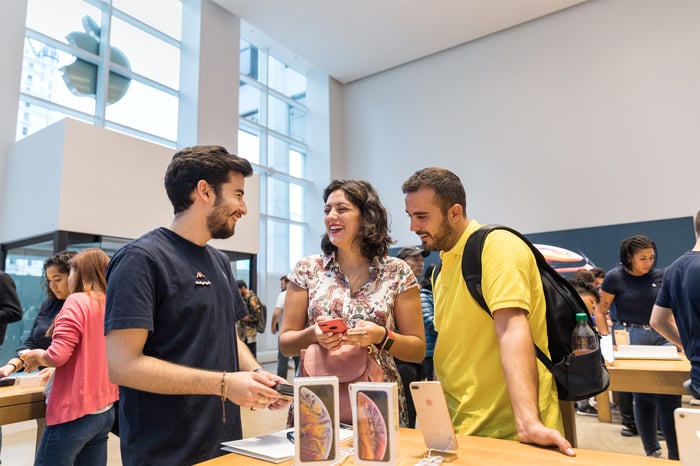 You should never sell a fundamentally sound stock that you believe in because of short-term market sentiment. If you believe the company has changed for the worse -- maybe new management takes over, or a number of poor decisions are made -- then it's reasonable to consider lessening or selling your stake.

In this case, that has simply not happened. Apple's fourth-quarter and full-year numbers were phenomenal.

Q4 revenue rose to $62.9 billion, an increase of 20% over the year-ago quarter. Earnings per share improved even more, rising by 41% to $2.91. CEO Tim Cook laid out the extent of the company's accomplishments in his remark in the Q4 earnings release:

We're thrilled to report another record-breaking quarter that caps a tremendous fiscal 2018, the year in which we shipped our 2 billionth iOS device, celebrated the 10th anniversary of the App Store and achieved the strongest revenue and earnings in Apple's history.

The company has forecast Q1 revenue (which includes the holiday season) between $89 billion and $93 billion. That would be an increase from Q1 2018's $88.3 billion even if the company comes in on the low end.

iPhone sales may not follow a predictable path. Since prices have pushed higher, consumers may wait an extra month or two to upgrade. They may also check to see which carriers offer the best promotions, and move when an attractive incentive gets offered.

In the end, though, they will move. iPhone still sets the standard for smartphones, and that's not likely to change. That keeps consumers in the Apple ecosystem and drives sales of other devices.

Apple remains an innovation leader with a captivating product line that commands customer loyalty. It keeps putting up record revenue numbers while building share in secondary businesses, including smartwatches, automobiles, and its various app stores. It also has top-tier retail stores and partnerships with every major phone carrier that make iPhone the de facto flagship model for all of them.

A small interruption in production, or even a slow quarter, does not make Apple any less of a long-term buy. This is a dip in price due to speculation, and that's either something to ignore or a chance to expand your holdings.