Shares of Tesaro (NASDAQ: TSRO), a mid-cap oncology company, jumped by as much as 59% on heavy volume this morning after the company announced that it had agreed to a $5.1 billion takeover bid from British pharma giant GlaxoSmithKline (GSK 0.52%). Glaxo is reportedly buying Tesaro for its FDA-approved ovarian cancer drug Zejula (niraparib). Zejula belongs to a fairly new class of medicines known as  oral poly ADP-ribose polymerase inhibitors, or PARP inhibitors for short.

Clovis Oncology's (CLVS -3.94%) shares also marched higher by a whopping 31% in early-morning trading today in response to this deal. Clovis sports a PARP inhibitor called Rubraca, which competes head to head with Zejula. Investors appear to be betting that Clovis will be the next PARP developer to catch the eye of a deep-pocketed big pharma or blue-chip biotech. 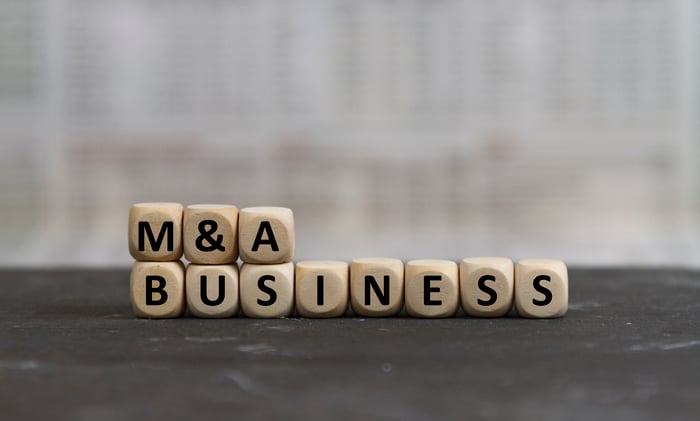 Not surprisingly, Glaxo's shareholders aren't entirely thrilled with this deal, evinced by the drugmaker's shares falling by nearly 8% right out of the gate today. Despite multibillion-dollar peak sales projections for both Tesaro's Zejula and Clovis' Rubraca, these two drugs are nowhere near blockbuster status at this point in their respective commercial launches.

Zejula's third-quarter net sales, for instance, came in at only $63 million for the three-month period. And Rubraca fared even worse, hauling in a mere $22.8 million during the third quarter of 2018. In short, Glaxo may have just grossly overpaid for Tesaro.

On the bright side, Zejula still has a shot at living up to these lofty sales projections over the long run. This drug, after all, is presently in a host of clinical trials for other high-value indications, such as breast and prostate cancer. The downside, though, is that Clovis' drug is also pursuing similar indications in its clinical program. So there's a good chance that these two PARP inhibitors will end up competing for market share across many of the same indications. Glaxo, therefore, will need some luck going forward to ensure that this deal turns into a net positive for shareholders and not a costly misstep.