Intuitive Surgical (NASDAQ:ISRG) has been a Foolish favorite of ours for years.

The company's robotic approach to surgery improves surgical precision, which leads to better patient outcomes and lower rates of hospital readmission. Intuitive's recent 20% growth in procedures indicates that robotic surgery is gaining adoption in more operating rooms. In addition to patients, investors have also benefited greatly from the growing acceptance of the company. Intuitive's shares are up more than 40% during just the past 12 months. 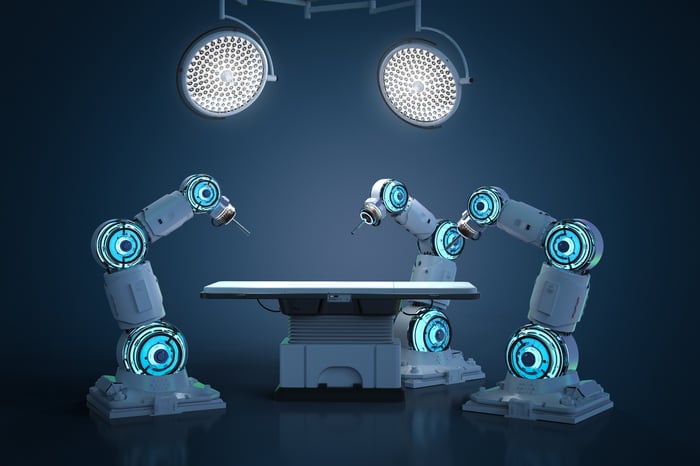 But Intuitive is also no longer an under-the-radar opportunity. With the company's $62 billion market cap, its outsized revenue and earnings growth rates are becoming more difficult to maintain. Aren't there smaller surgical robot providers who have potentially greater upside?

Brian Gahsman, the portfolio manager of AlphaCentric's Global Innovations Fund, believes yes. As one who follows robotics very closely, Gahsman sees a growing opportunity for smaller vendors to gain share in specific niches. He has also noticed that, in addition to their strong revenue growth, these smaller companies are often acquisition targets for larger and more established medical device corporations.

In the following conversation, Brian chats with Motley Fool Explorer lead advisor Simon Erickson. He describes the opportunity for robotic surgery and healthcare automation and names several smaller companies on his investing radar.

Simon Erickson: Brian, we've chatted a couple of times in the past about the importance, strategically, of robotics, how this is just changing a lot of things out there, from industrial manufacturing to Amazon putting the key to robots in their warehouses to robotic surgery in the operating room. There's a lot of exciting stuff going on in robotics. You're a person who follows this space pretty much exclusively. What are you excited about in robotics, is my first question?

Brian Gahsman: Well, as I've discussed before, I mean, there's very few and far between investments over the past 100 years that you could've gone into that literally touch every different industry. It's not just manufacturing and these robotic arms that you see. It really touches every single different area. Most investors probably already have a company in their portfolio that is benefiting from robotics and automation. But this change is swift. The momentum is incredible right now because we're all globally adopting robotics and automation. By 2025, I think we will be very hard-pressed to find many companies in any different industry group that have not somehow adopted and integrated robotics and automation.

You also asked about areas of excitement. We'll get into the tariff talks and the industrial manufacturing stuff, I think, in a little while here. A very, very under-followed area of robotics and automation right now still is robotic surgery and healthcare automation. It's growing more rapidly than we saw the adoption -- I mean, I've been doing this for a long time. I started following the stocks back in 2013, and the growth in the surgical robotics space alone -- we'll keep that separate from the healthcare automation space -- but surgical robotics alone from the one player into the surgical back then, I mean, we've got over a dozen different publicly traded companies now with FDA approval selling these systems.

Intuitive Surgical itself has competition with companies like TransEnterix, who reports earnings today, so I'm not going to get too much into [them]. I don't want to skew anything, but TransEnterix has the Senhance System and they do laparoscopic surgery, which is exactly what the da Vinci System does. You've got Corindus Vascular that does cardiovascular procedures, eliminated radiation in cath labs, and now they're also moving into the space of neuro stunting. It goes on and on, and I think what we've done is we've hit a point where the FDA, their learning curve on these surgical robotics systems has reached a point where FDA approval is happening a lot more swiftly, as well as these machines having much less margin of error, much more freedom of manual dexterity than a surgeon has.

Erickson: On that note, we have some really big medical device companies that seem to really be interested in this space, too. We saw Medtronic (NYSE:MDT) just bought Mazor Robotics (NASDAQ:MZOR) not too long ago, in an acquisition. Are you seeing more of those niche players getting bought up, potentially, by those larger medical device companies that have those huge sales forces and the established relationships already with the hospitals?

Gahsman: Yes, I do see that happening more and more. And actually, Mazor was working with and they had a strategic partnership with Medtronic quite some time ago. They couldn't really meet their demand or their capacity issues, so they teamed up with Medtronic, I believe it was back in 2016, to facilitate that expansion, and once that happened Medtronic decided to basically go all in on that. Mazor has a competitor out there, too, it's called Globus Medical (NYSE:GMED). I think the ticker's GMED. And Globus has almost the exact same system, just kind of a different colored cassette on top of the whole machine. But if you look at videos of both, they're very identical and Globus is still held on its own.

So, I'm not sure if Johnson & Johnson or somebody else is going to come and scoop up Globus to compete with Medtronic now owning Mazor, but that is the nature of this space and that is an incredibly small subsection of robotics, the surgical robotics space. So out of the 15 players that are currently out there, I think the M&A is very, very predominant right now. There are a lot of big eyes watching these companies.