Please ensure Javascript is enabled for purposes of website accessibility
Log In Help Join The Motley Fool
Free Article Join Over 1 Million Premium Members And Get More In-Depth Stock Guidance and Research
By Daniel B. Kline – Dec 4, 2018 at 7:17AM

Eight hours of sleep a night is recommended but not so easily obtained.

American adults need seven to eight hours of sleep per night on average, according to the U.S. Department of Health and Human Services (DHHS). Unfortunately, the average American gets less than that (6.8 hours) and 40% sleep less than 6 hours a night, according to a recent Gallup survey.

That's bad news because a lack of sleep can cause problems both big and small. Being tired could lead to a small lapse in judgment, a life-altering event, or anything in between. The DHHS explains some of the potential negative effects of not sleeping enough on its website:

Studies also show that sleep deficiency alters activity in some parts of the brain. If you're sleep deficient, you may have trouble making decisions, solving problems, controlling your emotions and behavior, and coping with change. Sleep deficiency also has been linked to depression, suicide, and risk-taking behavior.

Not sleeping enough can negatively affect every area of your life. And while some people simply don't have enough time to get their recommended sleep, others do but lose sleep to work stress. In fact, a new survey on sleep and work stress from the Sleep Judge showed that all 1,000 respondents had lost sleep due to work stress at some point. 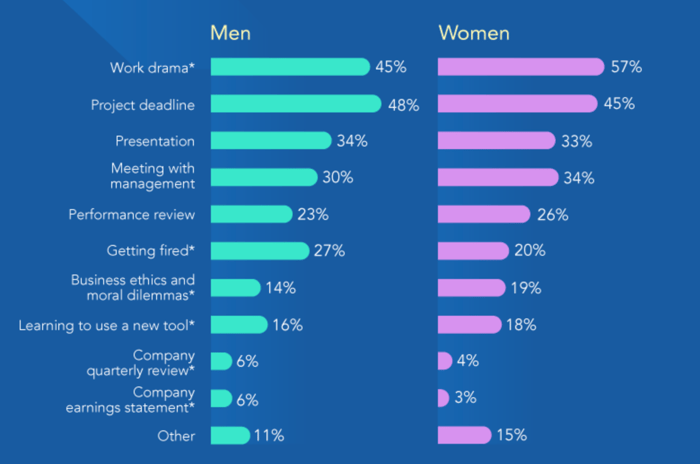 While men and women had slightly different answers, the top five answers were the same. Work drama was the top reason for women (overwhelmingly, with 57% of female respondents citing it as a reason they have lost sleep). Men named project deadlines as their top answer, though work drama was close behind. Both genders had about a third of respondents losing sleep to worrying about having to do a presentation, and 27% of men but only 20% of women have lost sleep over worrying about getting fired.

People who self-define their jobs as very stressful reported sleeping the least each night (5.8 hours) while those in moderately stressful positions reported 6.1 hours. As perceived stress levels decreased, respondents reported getting more sleep per night. 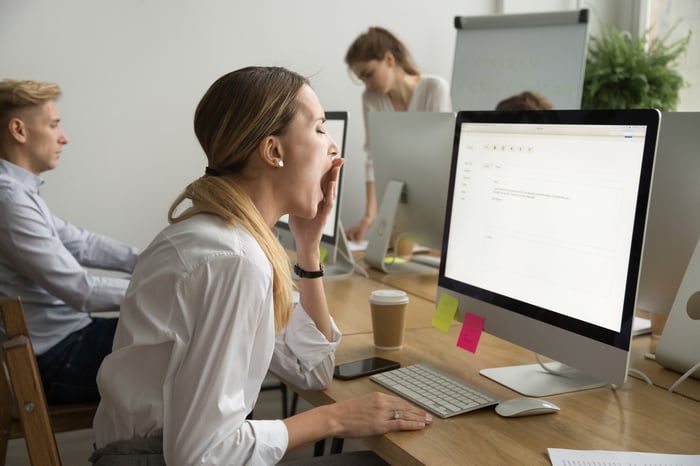 Not getting enough sleep can be caused by work stress. Image source: Getty Images.

Some of the issues that keep people up at night can be lessened with planning. If you're losing sleep due to deadline worries, you may be able to alleviate that with better planning. Have a schedule and stick to it as much as possible. Communicate progress with management, and try to manage problems before they emerge rather than handle them after it's too late to do anything.

Of course, it's not possible to manage away all work stress, but you can try to lessen its impact on how you sleep. Try to make sleep a priority. Follow best practices like not eating a big meal right before bed and winding down your evening with a little reading.

It's also important to make sure your bedroom is conducive to getting a good night's sleep. Make sure you have a dark, noise-free environment, and leave your smartphone elsewhere.

The first step toward fixing a problem is admitting that one exists. If you can't put the work stress aside, you should consider meditation, yoga, and other ways to focus the mind and let go of stress. There's no one answer for everyone, but it's important to take steps to try to get more sleep -- even if you can't hit eight hours.