One of the world's biggest fast-food brands opened up on this day 64 years ago with one humble location and an Insta-Broiler.

Today marks the 64th anniversary of the day Burger King first it opened its doors back on December 4, 1954, in Miami. Like so many successful businesses, Burger King's founders borrowed the idea for their fast-food joint from another prosperous enterprise, taking inspiration from McDonald's (MCD -0.21%)  and setting off one of the most prominent rivalries in American business.

Co-founders Keith Kramer and Matthew Burns acquired the rights to a new grill machine called Insta-Broiler and named their first restaurant in Jacksonville, Fla., "Insta-Burger King," franchising around the state, but franchisees James McLamore and David Edgerton opened their first location on December 4, 1954 in Miami.

That duo is credited as the pioneers of the modern day Burger King, as they came up with the Burger King mascot in 1955 and invented the iconic "Whopper" sandwich in 1957. Perhaps most important though, McLamore and Edgerton improved on the insta-broiler with a gas grill called the "flame-broiler," which remains the centerpiece of Burger King's marketing as the company cooks its burgers over an open flame, unlike most fast-food chains, which use flattop griddles.

Insta-Burger King quickly started franchising, much like McDonald's and other fast-food chains back then, but the company struggled in its earlier years, and it was acquired by McLamore and Edgerton in 1959.

McLamore and Edgerton owned Burger King for eight years, expanding it to 250 locations before selling it to Pillsbury in 1967. 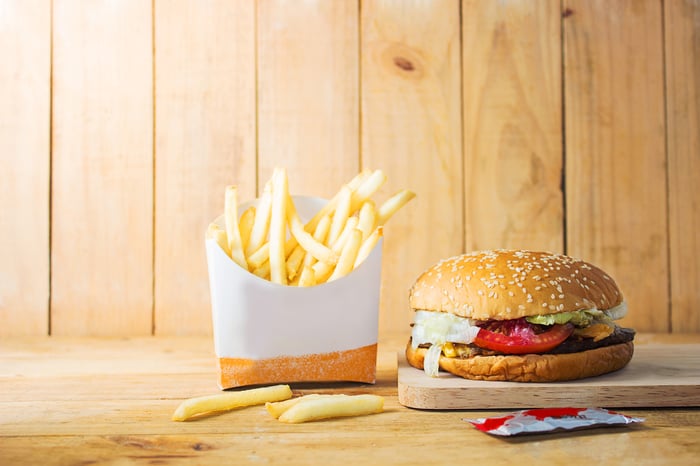 Like other fast-food burger chains including McDonald's, Burger King eyed franchise opportunities abroad shortly after the company's birth. In 1969, it opened its first international location in Windsor, Ontario, and following that, the brand entered Australia and Europe. It 1982, it moved into east Asia.

Today, Burger King has more than 17,000 locations worldwide in more than 100 countries, making it the second-biggest fast-food hamburger chain behind McDonald's, which has about 37,000 globally.

In recent years, Burger King has been adding locations aggressively abroad as it seems to have reached saturation in the U.S. However, its formula of a traditional fast-food menu of burgers, fries, shakes, and other sandwiches, along with value pricing and a well-known brand, has made the company consistently appealing for franchise partners looking to open stores.

In fact, the simplicity of its model has made it a favorite of not just franchisees, but a series of corporate owners.

When Pillsbury took over in 1967, it found a franchise business that was too inconsistent and gave franchisees too much leeway to depart from the corporate brand in coming up with their own menu items, among other deviations.

One particularly challenging fight came with Chart House, a Louisiana-based Burger King franchisee, that had expanded to 350 locations nationwide by 1970, but did so with its own purchasing, training, and inspection systems. Chart House fought with Burger King for much of the decade, though it finally sold its Burger King restaurants for $390 million to Pillsbury in 1984.

Faced with problems corralling its franchisees, Pillsbury tapped McDonald's executive Donald Smith to be CEO, and Smith implemented much stricter franchising policies. He prohibited corporations from being franchisees, required partners to live within an hour of their restaurants, and capped the number of restaurants they could run, policies that all seemed designed to prevent another standoff like the one with Chart House.  Like McDonald's, Smith also said Burger King would own properties and lease them to franchisees, in order to facilitate an easy takeover if need be. Smith also added specialty sandwiches like chicken and fish, expanding the chain's menu beyond burgers.

Smith left the company in 1980 to serve as president of restaurants for Pepsi. His tenure was followed by Norman Brinker, who launched an ad campaign targeting McDonald's, the first of its kind in fast-food, asserting the superiority of Burger King's burgers. That campaign helped BK's sales recover after they began falling once Smith left the company.

The British alcohol company, Grand Met, acquired Pillsbury in 1988 through a hostile takeover and expanded Burger King's presence globally. Grand Met also scored wins with the introduction of the BK Broiler in the early 1990's, a healthier chicken sandwich, as well as the Burger King Kids Club, promoted through a contract with Disney. The chain also grew its footprint, expanding into alternative locations like universities, gas stations, sports arenas, and airports.

Grand Met merged with Guinness in 1997 to form Diageo, now the world's largest distiller, and after years of neglect, the company sold Burger King to a group of private equity firms, including Bain Capital and Goldman Sachs, which took the company public in 2006, where it remained before its current owners came into play.

In 2010, the Brazilian investment firm 3G Capital acquired Burger King for $3.3 billion,   however, 3G took Burger King public again in a 2012 IPO, though it retained a majority ownership. Then the focus became cost-cutting. CEO Daniel Schwartz sold the company plane, refranchised all of Burger King's restaurants to significantly slash headcount, and invested in marketing and expansion abroad. With those changes, performance began to improve.

Schwartz delivered profit growth and comparable sales improvements, and in 2014, Burger King merged with Tim Horton's to become Restaurant Brands International (QSR -0.18%). RBI later acquired a third chain, Popeye's Louisiana Kitchen, in 2017. The stock has performed well since its debut in late 2014, up 66% compared to just a 37% gain for the S&P 500.

Though Burger King has been the object of corporate hot potato for nearly its entire history, the chain seems to have found a happy home at Restaurant Brands International. Though the burger chain's comparable sales growth has slowed of late, the company shows no signs of curtailing its expansion, and value deals like 10 chicken nuggets for $1 have resonated with customers.

Despite its trials and tribulations over the years, Burger King restaurants continue to satisfy millions of customers each day, and with 17,000 global locations, Burger King looks like it will still be around in another 64 years.