Activision and Take-Two have both won buy ratings this week -- but what about Electronic Arts?

It's starting to look like a mixed week for video gaming stocks as we head into the homestretch for Christmas shoppers. On the bad news front, leading game publishers Activision Blizzard (ATVI 1.34%) and Take-Two Interactive (TTWO 2.14%) got their stocks rocked yesterday -- apparently on analyst concerns that Take-Two's Red Dead Redemption 2 has a flawed "economy" in which the "earn rate ... is painfully slow and prices for goods are too high" (according to a report out on StreetInsider.com).

Of course, while that might explain why Take-Two stock closed Monday down nearly 6%, it doesn't explain why Activision also fell. (And in the end, investors seem to have realized their mistake, and shares ultimately closed up for the day.)

On the good news front, meanwhile, both Take-Two and Activision stocks are receiving positive mentions on Wall Street in response to Monday's weakness. Here's what you need to know. 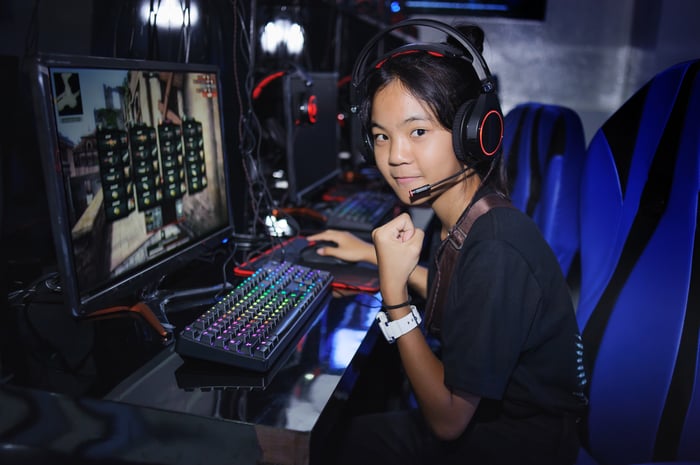 Too late to catch yesterday's rebounding stock price, analysts at Gabelli nonetheless announced this morning that they're initiating coverage of Activision Blizzard with a buy rating and a $62 price target, implying more than 29% potential upside to the shares. "Activision Blizzard is [the gaming stock] best positioned to benefit from the growth of eSports, mobile gaming, the digital revenue shift and the rise of the Chinese games market," says Gabelli. "We expect Activision Blizzard to continue be a consolidator in the industry and that the strong management team will be at the forefront of future trends and growth opportunities."

That's not an uncommon view on Wall Street, where 15 of the nearly two dozen analysts who follow Activision recommend buying shares (and there are no sell ratings to be found), according to data from S&P Global Market Intelligence. On average, analysts expect to see Activision grow its earnings at 14.4% annually over the next five years.

...and recommending Take-Two, too

"[W]e would expect reward Payouts [within the RDR2 game] to start conservatively," explained Merrill Lynch, because RDR2 is currently still in beta and as the game gets refined, it will be "easier to raise" rewards than to get players to accept having in-game rewards rolled back at a later date. For that reason, Merrill isn't concerned about the RDR2 "economy" that set other pundits to panicking on Monday. Rather, Merrill is focusing on the "monetization potential" of the game.

As for me, I'm not so sure. On the one hand, yes, Red Dead Redemption 2 is currently the hottest-selling game on the Xbox (and No. 2 on the PS4), according to data from CultureOfGaming.com, and that bodes well for Take-Two's earnings over the next few months at least. (Analysts are forecasting 15.5% long-term earnings growth for Take-Two, the fastest growth rate of the three big publicly traded gamers.)

On the other hand, though, when I look at Take-Two Interactive, with its near $12 billion market capitalization, but only $213 million in trailing earnings and negative free cash flow, I find it hard to get excited about Merrill Lynch's pick.

For that matter, though, I'm not exactly convinced that Gabelli's pick -- Activision -- is the best play on gaming, either. Don't get me wrong: Although priced at more than 62 times trailing earnings, Activision generates much stronger cash profits than are reflected on its income statement, and sells for only 20 times trailing free cash flow. For a 14.4% grower with a 0.7% dividend yield, Activision stock is pricey, but not insanely expensive.

From my point of view, a third gaming company -- Electronic Arts (EA -0.01%) -- offers a more compelling value. For one thing, with $969 million in trailing earnings, EA looks a whole lot more profitable than Activision ($577 million) does on the surface. Granted, EA doesn't generate as much free cash flow -- only $1.4 billion to Activision's $1.8 billion. But at only $25.4 billion market cap, EA isn't as expensive as Activision is, either -- only about 17.5 times FCF, which seems a more reasonable price given EA's 15% projected growth rate.

On top of all that, EA's FIFA 19 and Battlefield V games are outselling Activision's Call of Duty: Black Ops 4 on the Xbox platform right now, while on the PS4, FIFA 19 is No. 1, and Battlefield just one place behind Black Ops on the best-seller list -- all of which bodes well for EA outgrowing Activision, just as the analysts are predicting.

Long story short: I'm going to have to differ with both Merrill Lynch and Gabelli on this one, because it's not Activision or Take-Two that look like the best bargains in gaming to me. Instead, I give game, set, and match to Electronic Arts stock.