The Trade Desk's business looks stronger than ever heading into 2019. Here's why I'm buying more shares.

Despite reporting 50% revenue growth and a customer retention rate above 95%, shares of digital advertising company The Trade Desk (TTD -2.11%) traded down as much as 8% following its third quarter earnings report. The sell-off appears to have been fueled by fears of slowing growth in global advertising spend and a broader market sell-off among high-growth tech companies.  Notwithstanding its stock's recent volatility, The Trade Desk's omni-channel revenue growth, international expansion, and its newest series of products lay the foundation for a successful 2019 and beyond. 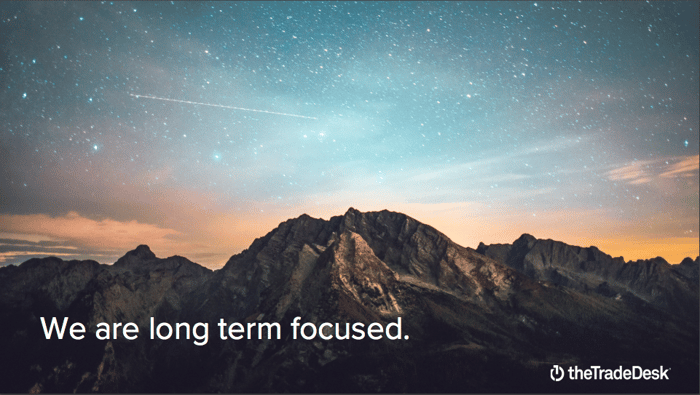 Growing in all the right ways

Over the last seven years, management has successfully transitioned The Trade Desk  to an omni-channel revenue model. With products serving mobile, Connected tv, and audio, The Trade Desk is ready to meet consumers wherever they browse media.

The international party is just getting started

The Trade Desk's ability to scale internationally suggests that it has plenty of growth left ahead of it. During the third quarter, nearly every office outside of the U.S. grew revenue at a record pace. Over the past year, Spain grew 380%; Hamburg, Germany, grew 206%; and Hong Kong grew by 107%.

Jeff Green believes China, which is currently the company's smallest market, will rapidly become its largest as the country becomes the largest advertising market in the world. The Trade Desk has been welcomed into China because they are not bringing a competing product into the country. Instead, through partnerships with global advertisers like Mazda , they are bringing ad-dollars into the country. This dynamic has led to recent partnerships with some of China's largest platforms, including Alibaba, Tencent Holdings, and Baidu, which give The Trade Desk the runway to be more aggressive with expansion into China.

As an objective partner that doesn't own any media itself, The Trade Desk should continue to find success leveraging partnerships with large platforms to expand internationally. This should make the company's omni-channel revenue growth even more resilient.

The Next Wave was a big risk, but it's paying off

The Trade Desk's newest series of products, labeled The Next Wave, has added to its already strong service offering, providing even greater value to its customers. The company dedicated 40% of its engineering resources for two years to develop The Next Wave, which Green calls "the biggest enhancement to The Trade Desk's platform ever." Green's goal is to create "consumer surplus" by continuing to add value and increase customer satisfaction with The Trade Desk's platform to maintain its 95% client retention rate. In keeping with this strategy, TTD customers are able to upgrade to The Next Wave without any increase in fees.

The Next Wave release featured three new products: Koa, an AI that scans The Trade Desk's proprietary 9 million impressions every second to inform media planning and buying; Planner, which uses insights from Koa to inform media campaigns and maximize ROI; and Megagon, a media buying tool which combines an intuitive user interface and Koa's optimized recommendations to transparently display what each ad impression will cost and how selections will impact performance. 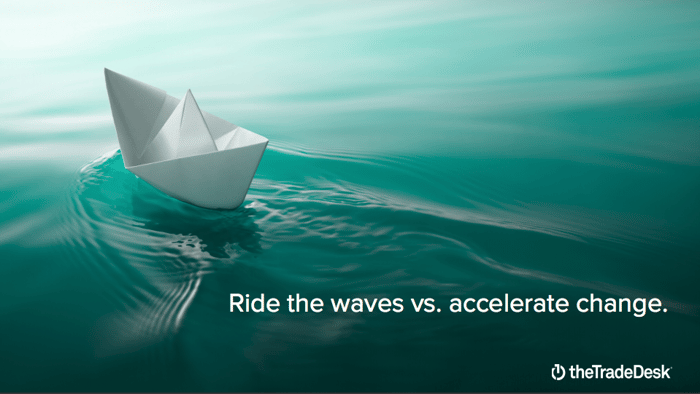 In less than six months, The Next Wave now accounts for 42% of customer spending with The Trade Desk, and Green expects it to account for over 50% by year-end.Customers using the new products have realized up to 20% savings on cost per thousand impressions (CPM), and, on average, increased cross-device and data spend.

The Trade Desk invested heavily in The Next Wave, and it's paying off. Customers have clearly loved the new products, and if the first six months are any indication, customer retention and spending will continue trending in the right direction.

What about the Giants?

The Trade Desk faces competition in online advertising from some of the largest businesses in the world, including Alphabet, Facebook, and Amazon. Although these giants control a large portion of the advertising market, growth across the industry should allow for multiple winners in this space. If The Trade Desk can maintain its track record of growing diverse revenue streams, expanding abroad, and developing innovative products that customers love, it will continue growing for years to come. I'm betting that Founder Jeff Green and The Trade Desk will continue to deliver.