When you wish upon a stock, the media giant makes dreams come true.

There's been a little pixie dust sending Disney (DIS -2.21%) shares higher lately, Tuesday's market sell-off notwithstanding. The media giant is a market darling again, and there's a lot to like about the House of Mouse.

Disney's grooving again, and investors are starting to notice. Let's look at the many reasons the well-oiled family-entertainment behemoth is a compelling stock to own and never let go. 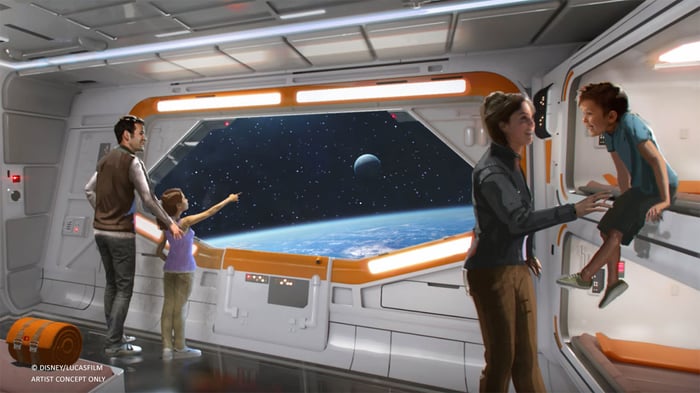 Disney has spent decades building Hollywood's most impressive vault of content and intellectual properties that will inspire new movies and shows. In a few months, we'll see Disney try to put it all together with its own branded streaming service.

We're not just talking about Steamboat Willie cartoon shorts and Who Wants to Be a Millionaire? here. Disney is tapping some of its biggest franchises for spinoffs that will anchor the platform with proprietary content. Don't underestimate Disney's reach when the world is a click away.

Ralph Breaks the Internet remains the top draw at the box office for the second weekend in a row, and that's not a fluke, as Disney properties routinely dominate at the local multiplex. Its Buena Vista arm is the distributor behind this year's three highest-grossing films in Black Panther, Avengers: Infinity War, and Incredibles 2.

Its magic touch isn't unique to 2018, either. Disney put out the two biggest movies of 2017 and the three most financially successful films of 2016.

Disney World in Florida and Disneyland in California will be opening ambitious Star Wars-themed expansions next year. After years of coasting on its killer brand and market leadership, Disney is making big investments that will keep driving record attendance higher for years to come.

Disney World is building new hotels, creating new ways for guests to get around its massive resort, and generally making itself an essential destination for theme-park enthusiasts. And its efforts are already paying off. Disney's Florida resort has jacked up its annual pass prices twice this year alone, raising its cost by as much as 15% over the past year.

Disney isn't a Dividend Aristocrat just yet, but it's working on a streak of eight consecutive fiscal years of increases. The yield is a modest 1.5%, but either the stock keeps moving higher and the yield moves lower or the increases keep coming and prop up the yield of a stagnant or sinking stock. Dividends matter.

One of the things coming to Disney World in a few years is a Star Wars-themed hotel. It will connect seamlessly to the Star Wars: Galaxy's Edge expansion, but the game changer is that guests will be immersed into an interactive storyline during their stay. They'll be whisked virtually away into the universe where even the room's windows are projections of space. Disney hasn't revealed how much it will charge for the experience, but it's fair to say the experience is going to be out of this world.

Stan Lee passed away last month, but just as Disney kept growing after Walt died, there's a lot of Marvel milking left for Disney in the coming years. Disney shelled out roughly $4 billion for Marvel, and it's getting its money's worth. Marvel has been behind many of Hollywood's biggest films, including three of this year's five biggest blockbusters.

The bullish thesis for Disney a decade ago often began with ESPN. The first cable network dedicated entirely to sports was the crown jewel in the $19 billion Capital Cities/ABC acquisition nearly two dozen years ago. Now ESPN is seen as a challenge for Disney, as cord cutters are tiring of paying for premium sports programming while escalating league contracts are propping up the network's content costs. Pricing will eventually get to the right place, though, and ESPN will continue to be the undisputed top dog in this niche.

Disney emerged victorious in its $71 billion bid for 21st Century Fox (FOX) (FOXA), and the deal should close soon. Disney's largest purchase in its storied history will take its already impressive content library to an even higher level. All of the pieces seem to fit perfectly, down to James Cameron's Avatar franchise ahead of several sequels that will hit theaters in the coming years and a controlling stake in Hulu.

Hulu is a great brand that has struggled under the leadership of several media giants with minority positions. It will be interesting to see what Disney can do now that one studio has a commanding 60% chunk of the enterprise.

Disney may not seem like a scorcher, but it's closing in on what should be its 10th year in a row of positive dividend-adjusted returns. The stock is nearly a six-bagger in that run. No stock will go up every year, but it's easy to believe in magic when you've moved higher for 10 years in a row.

Disney turned heads last month, when it boosted prices for its annual passes for the second time this year. But it's now showing why it can afford to get aggressive with its price increases. Fans who are bellyaching now will inevitably keep paying the heftier ransoms, and shareholders won't mind at all.