Between 2012 and 2016, Goodyear Tire & Rubber (NASDAQ:GT) delivered consistent profit growth, thanks to a combination of cost cuts and a strategy of focusing on larger rim sizes, which tend to produce higher margins for tire makers.

However, Goodyear's profitability has come under pressure over the past two years, primarily due to sharp increases in commodity costs. While the company has a good track record of recovering cost increases, the process takes time. Yet commodity cost pressure recently moderated, which could accelerate Goodyear's return to profit growth -- helping Goodyear stock deliver solid gains for investors in 2019.

Between 2012 and 2016, Goodyear's segment operating income (SOI) surged from $1.2 billion to $2 billion. This caused adjusted earnings per share to more than double, from $1.92 to $4. Based on this strong momentum, in late 2016 the company announced an ambitious target of growing SOI to $3 billion by 2020.

Rising commodity costs quickly undermined this plan. About two-thirds of Goodyear's raw material costs are tied to oil prices. In September 2016 (when Goodyear published its 2020 SOI target), the price of Brent crude was well below $50 per barrel. By the end of 2017, Brent crude was closing in on $65 per barrel -- and the price eventually surpassed $80 per barrel in October 2018. Prices for other key commodities like steel also rose during 2017 and much of 2018. 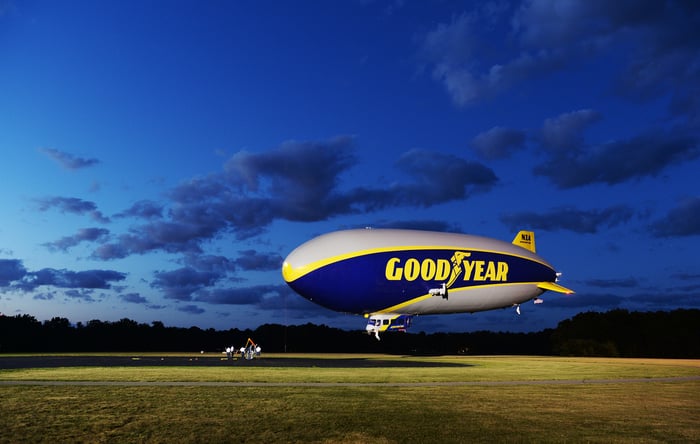 The outlook worsened further as 2018 progressed, causing Goodyear stock to plunge. Aside from further increases in commodity prices, tougher environmental regulations in China have driven up raw material costs. Goodyear currently expects raw material costs to be up $270 million for the full year, whereas its initial outlook called for a full-year decline of roughly $75 million. Meanwhile, a slowdown in Chinese auto sales has weighed on demand.

For the first three quarters of 2018, SOI totaled $967 million. As of late October, management expected to end the year with SOI of at least $1.3 billion, more than 25% below its initial outlook. Analysts expect adjusted EPS to sink to $2.59, down another 17% year over year.

Fortunately, commodity costs have recently moderated. If recent trends hold, Goodyear Tire & Rubber could be in line for significant savings in 2019.

Most notably, the price of Brent crude has plunged to a little over $60 per barrel since peaking at around $85 per barrel in early October. That means petroleum product prices could flip from being a major cost headwind in 2017 and 2018 to being a tailwind in 2019. Steel prices have also moderated recently.

Importantly, Goodyear isn't relying wholly on lower raw material costs to drive profit growth. It implemented a price increase in September, and many other tire makers followed suit in October and November. Thus, even if commodity costs are flat year over year in 2019, Goodyear should be able to significantly improve its profitability.

The bar is low

Yet analysts have been expecting double-digit EPS growth for 2019, even a month or two ago, when commodity prices were much higher. Whereas Goodyear's 2020 SOI target of $2 billion to $2.4 billion seemed out of reach as recently as October, lower oil prices make that goal seem quite achievable -- particularly in light of Goodyear's September price increase.

As a reminder, Goodyear posted adjusted EPS of $4 in 2016 on SOI of $2 billion. If EPS is headed back to the $4 mark (or even higher) in the next year or two, Goodyear stock should be worth far more than its Tuesday closing price of $23.01.