Please ensure Javascript is enabled for purposes of website accessibility
Log In Help Join The Motley Fool
Free Article Join Over 1 Million Premium Members And Get More In-Depth Stock Guidance and Research
By George Budwell - Dec 5, 2018 at 10:00AM

Cronos is reportedly in partnering talks with tobacco giant Altria. But this pot stock may be worth buying regardless of how these negotiations play out.

Shares of Canadian pot grower and distributor Cronos Group (CRON 4.89%) have been on fire this week, thanks to Altria's (MO 1.32%) reported interest in either buying the company outright or perhaps striking a partnership agreement that could include a sizable equity investment. Altria is the largest American tobacco company in terms of annual sales and the maker of iconic cigarette brands like Marlboro.

While a partnership with tobacco giant Altria would almost certainly alter Cronos' near- and long-term outlook in a fundamental way, there's also some very good reasons to remain cautious with this mid-cap pot stock. 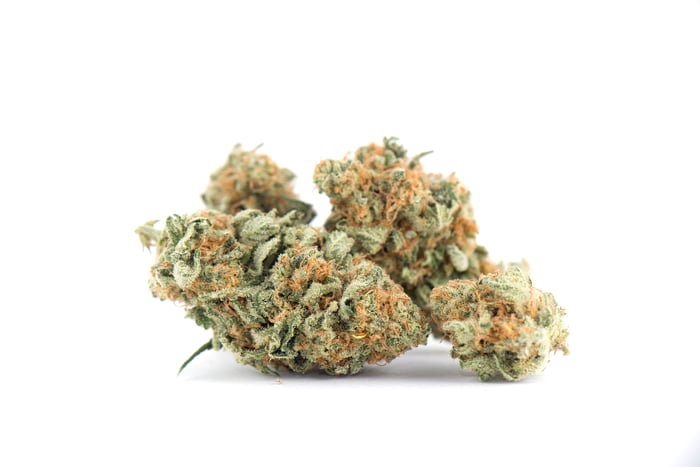 First of all, Altria is rumored to have also touched base with other cannabis companies such as Aphria (APHA) and Tilray (TLRY) about an equity investment or a possible takeover. Aphria no longer appears to be in the running for a variety of reasons. But Tilray's top-notch production facilities and expanding global footprint could make it a more attractive partner than Cronos at the end of the day.

Cronos' sky-high valuation is another key concern. After this latest rally, the pot producer's shares are now trading at over 17 times its 2019 projected sales. That valuation may pale in comparison to the likes of pot titan Tilray, but it's still nowhere near cheap.

The main point is that investors should definitely chew over Cronos' core value proposition before buying shares at these elevated levels -- and not simply speculate on a deal that may never materialize. With this idea in mind, let's tease apart Cronos' underlying business to consider if this high-flying pot stock is truly worthy of our hard-earned capital.

Like all Canadian pot stocks, Cronos is set to benefit in a big way from the legalization of adult-use recreational cannabis in the country. Although the company reported a paltry 3.8 million Canadian dollars in total revenue for the third quarter of 2018, Cronos' sales are projected to explode higher next year as a result of the end of prohibition on recreational pot in Canada.

Specifically, industry insiders are expecting the company to rake in around US$112 million in sales in 2019 (at current exchange rates). So, despite its lower production capacity and fewer supply agreements with various Canadian provinces, Cronos is on track to generate a fairly similar amount in annual sales as Tilray next year.

How is Cronos punching well above its weight? The apparent reason is the company's decision to build out a flagship premium brand called "Cove" that's aimed at the top end of the market, as well as more mainstream brands like Original BC and Spinach at the same time.

That's not to say that other Canadian pot producers aren't also in the process of brand building, but Wall Street seems to think that Cronos' dried flower products will perform exceptionally well in the areas where they are commercially available. And so far, the glowing reviews from numerous end users seem to support this optimistic outlook.

From an investing standpoint, the main problem with the marijuana industry is the lack of a clear-cut competitive moat. As things stand now, the only differentiating factors seem to be a company's production capacity, gross margin, and, of course, its brand recognition. None of these factors provides all that much of a barrier to would-be competitors, quite frankly.

Recognizing this fundamental problem, Cronos' management recently struck a landmark agreement with Ginkgo Bioworks to synthesize so-called "rare cannabinoids" via customized yeast strains. The end game here is to build a platform that would enable the production of less common cannabinoids on a commercial scale and at a reasonable price point.

Now, this novel partnership won't yield results overnight. But Cronos is at least striving to truly differentiate itself from an exceedingly crowded field of competitors and that's a big feather in the company's proverbial cap.

At first glance, Cronos' stock doesn't stand out as a particularly compelling growth vehicle because of its stately valuation, combined with the sheer number of companies vying for a slice of the Canadian pot market. But a deeper look seems to suggest otherwise.

The long and short of it is that Cronos' partnership with Ginkgo has the potential to open up a number of untapped markets for cannabis in general. And Cronos, by virtue of this deal with Ginkgo, would have first crack at filling the gap, so to speak.

So, even though Cronos' valuation may be hard to stomach from a near-term perspective, investors shouldn't necessarily shy away from this name. The company's longer-term commercial opportunity could end up dwarfing many of its peers, after all.

That being said, Cronos stock is arguably only suited for ultra-aggressive investors who are willing to let the company's research and development efforts unfold over a multiyear period.