Shares of Citigroup (NYSE:C) are taking a beating today, trading down by nearly 5.5% as of 11:45 a.m. EST. On Wednesday, Citi's chief financial officer warned the bank may not be able to reach its targets for 2018 due to lower-than-anticipated trading and investment banking income.

At a conference for major financial companies, Citi's CFO, John Gerspach, told the audience of analysts and investors that slowing debt and equity issuance by public companies would likely result in a year-over-year decline in investment banking revenue for the Big Four U.S. banks. 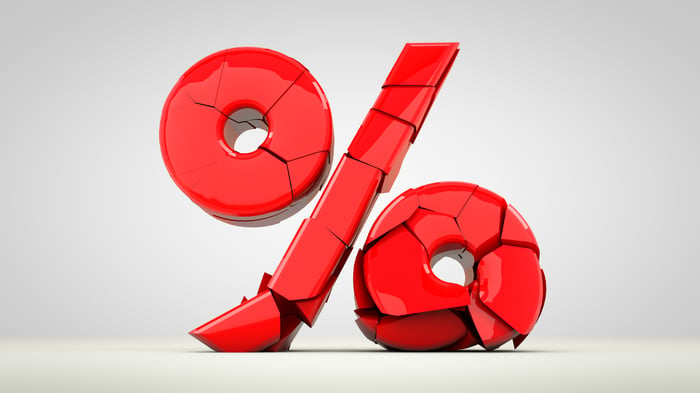 That admission comes just as rising interest rates, which have buoyed shares of major banks, are starting to go the opposite direction. All eyes are on the 10-year U.S. Treasury yield, which now sits at 2.85%, down from a peak of 3.25% on Oct. 5. The 10-year U.S. Treasury yield is often used by bank analysts and industry watchers as a proxy for what banks can earn on new loans they originate and hold on their balance sheets.

Most concerning is that the spread between short- and long-term interest rates is the smallest it has been since 2007. At current prices, 10-year U.S. government notes yield about 0.11 percentage points more than two-year notes. Banks generally borrow money and take in deposits at rates that approximate two-year yields, and lend at rates that approximate 10-year yields. When spreads narrow, banks' lending margins shrink, too.

Plunging margins between short- and long-term rates aren't just a concern for banks' net interest margins; they're also a warning sign that a recession may be just around the corner. When long-term bond yields fall below short-term bond yields, it produces an inverted yield curve, which often happens just before a recession.

Sentiment about interest rates has changed rapidly, as traders are now pricing in the prospect that the Federal Reserve could actually cut rates in 2020 to spur the economy. That doesn't bode well for banks, which have only just begun to reap the benefits of rising interest rates.