For a company of its size, the cloud provider continues to post impressive growth across a variety of measures.

With all the hustle and bustle surrounding the holidays, there's a chance you missed one of the more impressive recent earnings reports -- that of salesforce.com (CRM -2.48%). The cloud service provider, which specializes in customer relationship management (CRM) software, reported the results of its fiscal 2019 third quarter, smashing both consensus estimates and its own guidance.

Even in light of the recent market -- which has been most unforgiving -- Salesforce stock jumped 10% the day after its earnings report and continues to hold the majority of those gains. Let's take a look at a number of surprisingly strong metrics that led the stock price higher. 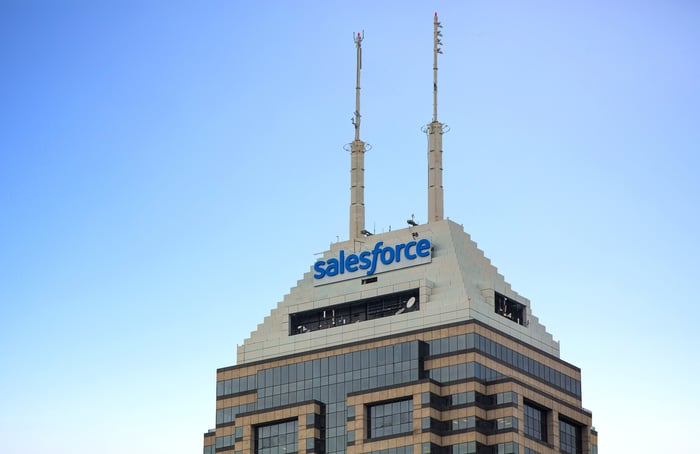 Salesforce grew its third-quarter revenue to $3.39 billion, an increase of 26% year over year. This topped both the company's internal forecast and analysts' expectations. Growth was strong across geographic markets, products, and sales segments.

The company ended the quarter with a total of $5.38 billion in unearned revenue, an increase of 25% compared with the prior-year quarter. This metric, which was previously referred to as deferred revenue, accounts for sales that the company has already made but can't yet recognize due to accounting rules. This will be added to its revenue at some point over the coming 12 months.

Salesforce had $21.2 billion in "remaining performance obligation," an increase of 34% year over year. This new metric is the result of new accounting guidance, and represents all future revenue that is currently under contract that has not yet been included in revenue. This is essentially giving investors a glimpse into the future. Of that total, the company expects to recognize $10 billion of revenue in the coming 12 months.

Last quarter, Salesforce co-CEO Marc Benioff revealed that Einstein, the company's AI-enabled assistant, was delivering customers more than 3 billion insights per day. Now, just one quarter later, that number has vaulted to over 4 billion predictions per day. This is a testament to the deep integration of artificial intelligence into every facet of the company's business. Think of this as similar to the word predictions your phone makes when you're composing an email, albeit on a much larger scale. This makes Salesforce products more intuitive and useful.

As Salesforce has expanded its product offerings, the company has also increased its total addressable market. Salesforce now calculates the addressable market across all its product lines -- including the areas of sales, service, marketing, commerce, platform and other, analytics, and integration (the result of the recent MuleSoft acquisition) -- at an impressive $145 billion. Expectations for 25% revenue growth next quarter

Salesforce continued its impressive record of "beat and raise" by exceeding its forecast and raising its guidance for the full year. For the upcoming fiscal fourth quarter, Salesforce is anticipating revenue of between $3.551 and $3.561 billion, which would represent year-over-year growth of 25% at the midpoint of the range. If the company succeeds in only meeting its forecast, that would increase its full-year revenue by 26% compared with the prior fiscal year: an impressive feat for a company with a market cap of over $106 billion.

Salesforce has shown an uncanny knack for finding and investing in other up-and-coming tech companies. In a recent regulatory filing, the tech giant revealed it had strategic investments in such promising ventures as DocuSign, Domo, Dropbox, SVMK (the recently IPO'd parent of SurveyMonkey), and Twilio. Investing in these companies netted Salesforce about $63 million in gains during the third quarter, and a whopping $417 million in the first three quarters of this year. To put this into perspective, Salesforce currently holds $1.25 billion in strategic investments on its balance sheet.

These results show that in all the ways the metrics matter, Salesforce continues to exceed expectations and position itself for future success.