These two companies both have a renewable focus, but only one has proven itself over time.

If you are looking for a high-yield renewable power investment, Brookfield Renewable Partners (BEP -1.96%) and TransAlta Renewables (TRSWF -1.21%) will both pop up, sporting yields of 7% and 8.3%, respectively. But when you step back and look at each of these companies, one name stands out. Here's what you need to know to decide which is the better buy.

TransAlta Corporation (TAC -3.25%) is a Canadian power company with both carbon-based and clean power assets. It owns roughly 60% of TransAlta Renewables, which is more heavily focused on clean power. That said, TransAlta Renewables generates roughly 46% of its cash flow from wind power, 5% from hydro, 2% from solar, and the rest from natural gas. So while it has a clean-power focus, it isn't exactly a pure-play renewable energy company.

The relationship with parent TransAlta Corporation is an important one because it is a source of new investment opportunities. Essentially, TransAlta Corporation sells, or drops down, assets to TransAlta Renewables so it can raise cash to spend on growth projects. That benefits parent TransAlta, of course, but it also helps to grow TransAlta Renewables' business over time. Since the company's IPO in 2013 it has invested 3.1 billion Canadian dollars ($2.35 billion) in new renewable assets, a significant portion of which came from its parent. Debt and stock sales are both used to fund that spending, but the projects are generally running, or close to it, when bought, so they quickly add to cash flow.

Those investments have helped TransAlta Renewables increase its monthly dividend from CAD 0.04726 per share at the IPO to the current rate of CAD 0.07833 (roughly CAD 0.94 per year). The compound annual growth rate between 2013 and 2017 was roughly 6%. That said, the company has announced dividends through March of 2019 at the current level, but this means that the monthly rate won't have been increased for roughly 19 months. Such a long string at one level isn't out of the norm. Still, investors should be aware that the dividend can remain stagnant for more than a year even though the timing of dividend increases will make it appear that TransAlta Renewables has been making annual dividend hikes.

All things considered, TransAlta Renewables isn't a bad company, and it should continue to grow over time, rewarding investors with dividend hikes along the way. The problem, especially when comparing it to Brookfield Renewable Partners, is scale. TransAlta Renewables owns roughly 2.4 gigawatts of generation. That's not a huge capacity. And while being small means that new investments can have a big impact on the business, it also means that TransAlta's opportunity set is limited to smaller projects.

A giant with big plans

That's not the case with Brookfield Renewable Partners, which has over 17 gigawatts of power in its portfolio. As an example that highlights the scale difference even more, consider Brookfield Renewable's purchase of Isagen, the third largest power producer in Columbia, in 2016. The deal added roughly 3 gigawatts of power to its portfolio. Not only is this one asset larger than TransAlta Renewables, but Isagen has a pipeline of projects that could more than double its production. That provides solid internal growth prospects, as well.

Brookfield Renewable also recently acquired all of TerraForm Global and a material piece of TerraForm Power (it has since added to its TerraForm Power stake). These two renewable businesses, with 3.6 gigawatts of power between them, have a huge pipeline of solar and wind projects and broaden the partnership's global reach. Brookfield Renewable now has assets in North America, South America, Europe, and Asia, further increasing its opportunity set. 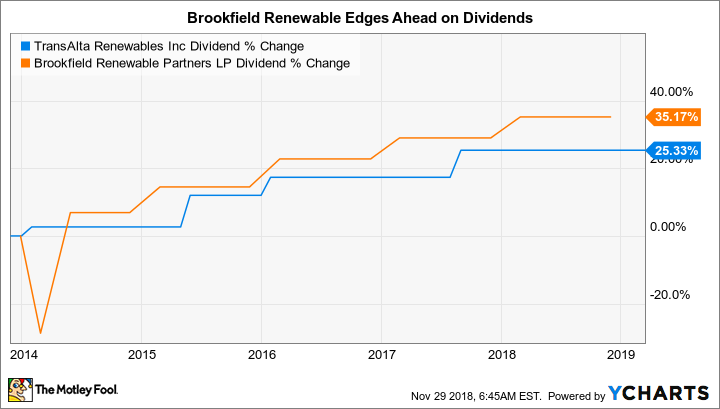 The two companies differ in scale and also in their asset mix. Brookfield Renewable Partners is a pure play on renewable power: Its largest contributor today is hydropower, which makes up around 75% of its portfolio, with the rest coming from wind, solar, and storage. Like TransAlta Renewables, Brookfield Renewable Partners has a supportive parent in Brookfield Asset Management (BN -1.23%). Here again, scale is an issue. Brookfield Asset Management is a $43 billion market cap asset manager with an over 100-year track record of investing in infrastructure assets. In contrast, TransAlta's market cap is $1.5 billion.

Brookfield Renewable targets distribution growth of between 5% and 9% over time. Since its inception, the partnership has increased the quarterly distribution every year, upping it from $0.3375 per share at its 2011 IPO to $0.49 in 2018. On an annualized basis, the partnership has hit its target range over the trailing three- and five-year periods.

2 Top Energy Stocks to Buy Like There's No Tomorrow
413%