Look around; the net is being cast closer than you think.

The Internet of Things (IoT), in which companies connect formerly unconnected things (like watches, cars, refrigerators, farms, etc.) to the Internet to collect data and sometimes automate systems, has promised to transform our lives by blurring the lines between the real world and the internet.

But the IoT hasn't yet converted many municipalities into smart cities. Road sensors haven't eliminated traffic. Orchards are still plagued by insects despite some automated systems to reduce them. And fitness bands have largely failed to make us healthier.

And so, after years of having IoT devices and innovations on the market, some may be wondering if the Internet of Things has already failed and if any companies are actually benefiting from it.

Fortunately, the IoT is gaining traction in several ways, and a handful of companies are making big moves in this space. So let's take a quick look at three significant IoT categories and how Apple (AAPL 2.49%), Amazon (AMZN 5.30%), Alphabet (GOOG 2.84%) (GOOGL 2.59%), and AT&T (T 0.66%) have the potential to boost their businesses via those avenues. 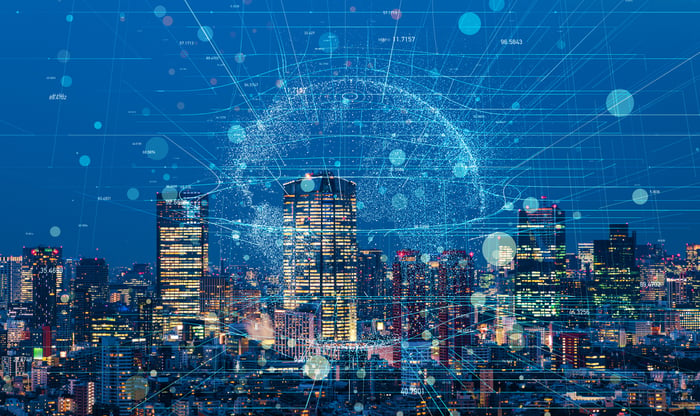 Smart speakers are invading our homes

In the third quarter of 2018, smart speaker shipments, mainly comprising Amazon's Echo devices and Google Home, grew by 137% to 19.7 million units. Amazon holds the top spot in the smart speaker category with 31.9% of the market, and Google is following closely with 29.8%, according to Canalys data.

So how are these two companies benefiting from this market already? Google's opportunity comes from having yet another source to gather user data from. The company earns nearly all of its revenue from selling ads, and consumers placing smart speakers in their homes and asking them all sorts of questions allows the company to collect more data and use it to serve up more targeted ads.

While Google has made lots of progress in catching up to Amazon, the e-commerce giant is already reaping significant benefits from its devices. Recent data shows that Amazon Prime members with an Echo spend $400 more on average each year than those without one. Sales from the speakers and the subsequent sales that consumers make through the devices could add $10 billion to Amazon's top line by 2020, according to RBC Capital.

Another visible sign that the Internet of Things is alive and well comes from the growth of wearable technology, like the Apple Watch. Sure, wearables have been hyped in the past, but the market is still young, and Apple's Watch sales are a good indicator that consumers are beginning to see their value.

The most recent IDC data shows that Apple shipped 4.7 million of its smartwatches in the second quarter of 2018, a 38% jump from the year-ago quarter. Consumers have been shifting their attention away from fitness trackers to high-end devices like the Apple Watch, which offers much more apps and better features, including the ability to make phone calls.

Apple has slowly outpaced many of its competitors and is now the No. 1 wearable tech vendor. In the most recent quarter, sales from Apple's wearable tech segment, which includes the Apple Watch, Beats products, and its AirPod headphones, increased by 50%.

The latest wearables estimates point to more good news on the horizon as well. Gartner predicts that worldwide smartwatch shipments could reach 155 million by 2022, up from 53 million in 2018.

5G is beginning to roll out

Why does this matter? Because 5G will help even more companies launch IoT devices by offering additional wireless capacity for them. There will be nearly 50 billion devices connected to the Internet by 2022, and expanding existing wireless services is the best way to allow all of those new devices to come online without slowing down existing traffic.

AT&T says that it'll have limited 5G capabilities in 12 cities this year, with more expanding into 2019. The wireless carrier and its rivals are still at the early stages of 5G, but this version of wireless cellular tech will be a cornerstone of the IoT, and it's already taking shape right now.

What IoT investors should keep in mind

Spending on the Internet of Things could reach $1.2 trillion by 2022, according to IDC, and nearly every major technology company is moving into this space already.

In addition to looking at IoT device sales like smartwatches and smart speakers, investors should also consider how the IoT will enable companies to drive more sales through these devices. For example, Amazon selling an Echo Dot for $30 isn't going to make the company a lot of money. In fact, Amazon might be losing money on the device or just breaking even. But selling the speakers has the potential to bring in billions of dollars in product sales by allowing users to easily purchase items through the device.

Similarly, Apple could help drive up services revenue from its Apple Watch by using the device to entice more of its customers to sign up for Apple Music. This gives Apple the opportunity to benefit from its Watch sales not just when it sells one of them but also when users find it convenient to use the device to stream music when they go for a run.

Investors looking for solid examples of how the IoT is succeeding need to look no further than the companies listed above. These tech titans may not always use phrases like "the IoT" when talking about their devices, services, and online sales, but the Internet of Things is already becoming interwoven into their businesses -- and it's all just beginning.