Shares of fashion-maker and retailer Michael Kors Holdings Ltd (NYSE:CPRI) finished trading down 5.7% on Dec. 7, more than double the 2.3% decline for the S&P 500 in what turned into one of the worst days for stocks in 2018. Michael Kors joined hundreds of other consumer-goods stocks that took a beating today, following the release of the monthly jobs report from the U.S. Department of Labor.

In short, the jobs report wasn't particularly bad, per se, but it was a touch underwhelming based on expectations. The unemployment rate held steady at 3.7% -- the lowest it has been in decades -- but the estimated 155,000 jobs added came in below expectations. Average hourly wages were up 3.1% from last year and up slightly from the prior month. 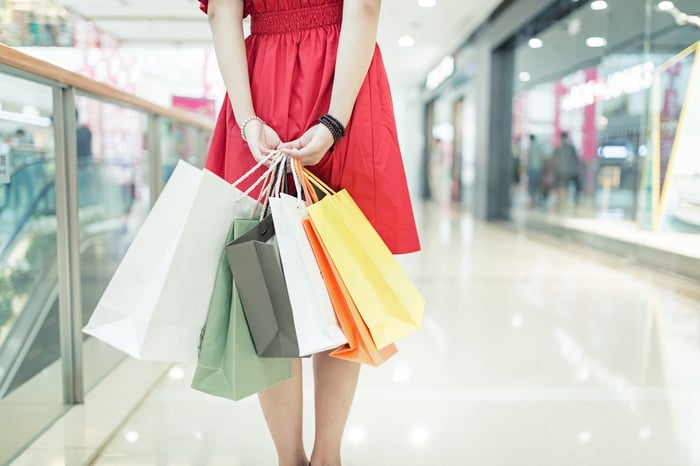 Michael Kors stock got marked down today, but it might not be a bargain just yet. Image source: Getty Images.

Yet continued concerns about China and the global economy -- particularly a looming trade war with the U.S. if ongoing negotiations fail to bear fruit -- continue to weigh on investors. You can factor in a huge surge in oil prices today -- crude futures spent much of the day up more than 4% before cooling off and finished trading up 2% -- which played some role in today's sell-off, too.

While the market was likely selling off Michael Kors and a litany of other consumer-brand stocks on today's bigger macro fears, investors should be more focused on specific and more material things with the company. After all, despite a relatively decent second fiscal quarter with a positive outlook, its stock price is down by nearly half since the late-September announcement that it was acquiring Versace.

To put it bluntly, there are serious concerns that it not only overpaid for the fashion house, but that it will struggle to combine yet another iconic -- if disparate -- fashion brand into a single, well-run company that delivers long-term value to investors. It's readily apparent that acquiring Versace will hurt the bottom line more than it will help in the short term. If management can't deliver higher long-term returns in trade for the short-term pain, then its latest splashy acquisition will be remembered far more than today's sell-off.

In summary, I wouldn't put too much weight into today's sell-off as a sign of weakness in the company, but I also wouldn't call it a buying opportunity. Until management shows that it can effectively combine its acquisitions into a cohesive, more profitable company, Michael Kors is probably better off in your wardrobe than your portfolio.