Crashing crude prices made for a rough first month for the newly-reorganized oil company.

Shares of Roan Resources (ROAN) plunged 37.6% in November, according to data provided by S&P Global Market Intelligence. Driving the decline was a brisk sell-off in the oil market, which offset the oil company's strong third-quarter results, its first report since reorganizing earlier in the year.

Crude prices fell off a cliff in November, plunging 22% for the month. Fueling oil's sell-off was the unexpected decision by the U.S. to grant waivers to buyers of Iranian crude that allowed them to go around the reimposed sanctions. Because of that, worries of tightening supplies quickly gave way to fears of an impending glut, which weighed on crude prices as well as the shares of oil producers like Roan Resources. 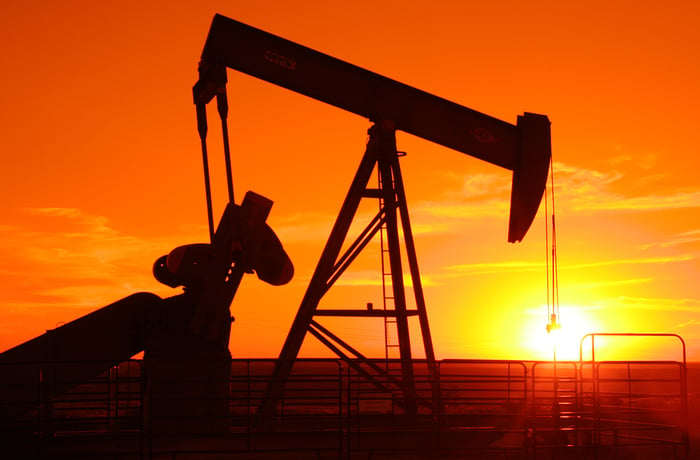 That sell-off in the oil market hit Roan Resources hard. Because of that, it overshadowed the first earnings report of the recently reorganized company, which recently formed following the merger of two companies focused on the STACK Shale play of Oklahoma. The report showed that Roan Resources is off to a strong start after it delivered a 30% increase in its production compared to the second quarter. That big uptick in production, when combined with higher oil prices during the quarter, enabled Roan Resources to generate $32.2 million, or $0.21 per share, of adjusted net income, which came in $0.05 per share ahead of analysts' expectations.

The plunge in oil prices weighed on oil stocks last month, especially those of higher-risk producers like Roan Resources. Not only does the company lack a track record since it's a new entity, but it's currently outspending cash flow to grow at a fast pace. While the company has a strong balance sheet, lower oil prices will widen the gap between capex and cash flow, which could come back to burn the company if crude continues to fall.