Please ensure Javascript is enabled for purposes of website accessibility
Log In Help Join The Motley Fool
Free Article Join Over 1 Million Premium Members And Get More In-Depth Stock Guidance and Research
By Rich Duprey - Dec 8, 2018 at 9:10AM

It could continue online or in Old Navy stores.

Another quarter, another dismal performance by Gap's (GPS -2.32%) ailing Gap brand. The company still relies on Old Navy as its crutch for growth, and it has repaired its Banana Republic chain, but there seems to be nothing that can save the Gap brand. Maybe it's time Gap closed down its namesake chain.

Since the beginning of 2014, the Gap brand has achieved just one quarter of comparable store sales growth. Twice in that time frame, comps came in flat, but otherwise Gap-brand stores have been on a consistent downward trajectory. And with the decline now accelerating, it may be time to, well, close the gap. 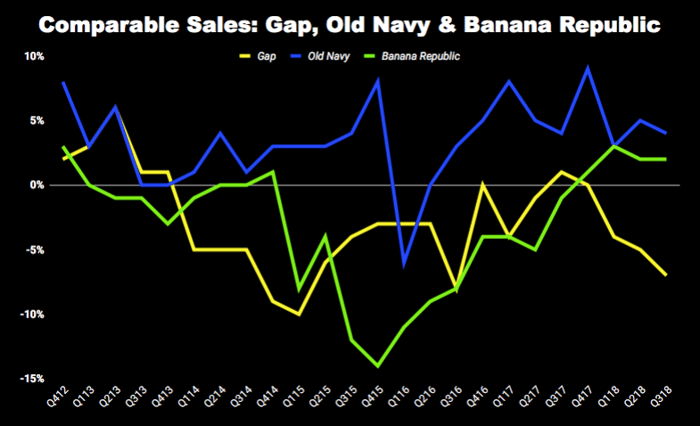 CEO Art Peck certainly seems frustrated with the direction the Gap label is heading, and says he is committed to making it smaller.

On the third-quarter earnings call with analysts, Peck said he wanted to "aggressively" close hundreds of Gap stores that are dragging down the brand. Dissatisfied with the image the chain is presenting and the damage it is inflicting on the company, Peck said he is "anxious to get this done and get it behind us as soon as possible."

But maybe simply closing hundreds of stores isn't enough. Maybe Gap needs to do something more radical, like completely shut down the chain and make Gap merchandise available only online or in its Old Navy stores.

A way to ease the transition

Earlier this year, Gap said it had nearly $1.2 billion in non-cancelable lease obligations due this year, another $1.1 billion due next year, and some $6.5 billion total. Most of the leases are for five years, with varying expiration dates, providing plenty of flexibility to transition the Gap away from being a retail format to being simply a brand. The company could even convert some of the stores to the Old Navy format to help achieve its goals of expanding that successful chain. 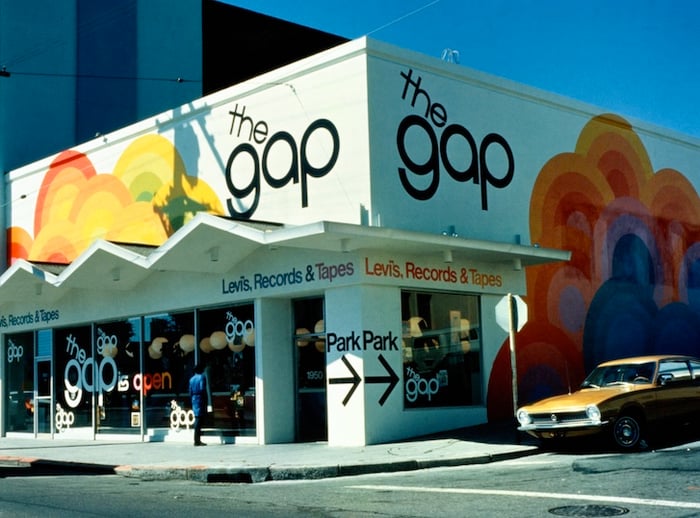 Previously, Gap said it wanted to open 60 new Old Navy stores this year, but it has now upped that to 70, and in the years to come it could accelerate that transition.

In some ways, it is actually preparing to convert the store over in everything but name. Peck told the analysts that similar to the revitalization of Banana Republic, he expects the "full adoption of Old Navy's product-to-market process" to drive better results at Gap. While he's obviously not just swapping out Old Navy merchandise and selling it under the Gap banner, it might not be a bad idea.

Gap-brand clothes simply don't resonate with customers anymore, and that's dragging down the parts of the business that are working. Product margins for the full company fell by more than 30 basis points last quarter, as steep declines at the Gap more than offset gains made at both Old Navy and Banana Republic.

A need to do more

There are over 3,200 stores in the company's portfolio, and fewer than 800 are Gap-brand stores in North America (there are 1,275 globally). Taking out several hundred of them is a good start, and because 20% of the Gap brand's revenue already comes from online sales, pushing more in that direction would benefit the company.

This would also do more for margins than pushing more sales to its hundreds of outlet stores, which while profitable, seem to be siphoning away customers seeking out discounts.

Right now, the Gap brand doesn't look like it can be rehabilitated the way Banana Republic was. Although Peck plans to be aggressive with his downsizing, and will do so quickly, it may not be enough to turn the chain around. Rather than allow it to continue undermining the parts of the business that are working, getting rid of the brand and cauterizing the wound may be a better option.