Waymo is rapidly racking up the autonomous miles. More importantly, it's on the verge of commercializing its self-driving prowess.

When it comes the having the most experience in the autonomous vehicle market, there's no denying that Alphabet's (GOOG 2.48%) (GOOGL 2.17%) Waymo is leading the pack. The company announced back in October that it had surpassed 10 million miles of autonomous driving, having reached the goal after hitting 4 million autonomous miles just 11 months earlier. Additionally, Waymo has logged 7 billion virtual miles through its software simulations.

Waymo's progress is impressive on its own, but it's also leaps and bounds beyond its competitors' progress. Take for example General Motors' (GM 4.21%) self-driving subsidiary, Cruise Automation. Cruise doesn't announce milestones for self-driving miles like Waymo, but according to a yearly California DMV report, the company drove more than 125,000 between December 2016 and November 2017 (the 2018 report won't be available until January 2019). For comparison's sake, Waymo drove 352,545 miles on California roads over the same period. 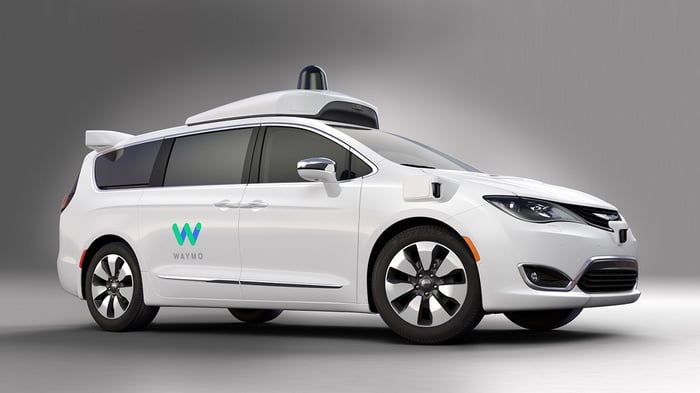 GM's Cruise is aggressively testing autonomous vehicles (AVs), and Cruise said at the end of 2017 that it was working toward 1 million autonomous miles driven every month by early 2018 -- but Reuters reported in October that the company had missed that goal.

But having the most autonomous miles isn't the only advantage Waymo has over its competition. The company is also a leader in the autonomous vehicle space because it's closer than the competition to commercializing its technology.

Waymo already has what it calls an "Early Rider" program in Phoenix, Arizona, where members of the public sign up to test Waymo's service and use its fleet of self-driving cars to cart them around town to work, to school, and to run errands.

Waymo is gearing up to launch a commercial version of its service before the end of the year, with plans to expand the service in 2019. To get ready for the launch, the company said earlier this year that it's ordering 62,000 Fiat Chrysler Automobiles Pacifica Minivans and up to 20,000 Jaguar i-Paces between 2018 and 2020, to offer different types of vehicles for its service.

Waymo has the potential to benefit from its current lead in the market in several ways, including with an automated ride-hailing service (robotaxis), automated logistics and local delivery services (think package delivery and autonomous semi trucks), and licensing its technology to automakers for their vehicles. The combined opportunity from these markets means that Waymo is sitting on a $175 billion opportunity, according to Morgan Stanley.

Investors should know that autonomous vehicles are just getting started and it's going to take some time before Waymo's business has a significant impact on Alphabet's top or bottom line. Over the next few years, we'll likely see a lot more growth from the autonomous vehicles services market, but it still faces regulatory hurdles.

Additionally, Waymo certainly isn't the only self-driving game in town. GM's Cruise plans to release a self-driving service sometime in 2019, and GM CEO Mary Barra just restructured much of the company to focus more attention on electric and autonomous vehicles. This means that GM's Cruise is likely to put up even more of a fight against Waymo in the near future than it already has.

Patient investors who jump into this market now will likely be glad they bet on the AV market early. IHS Markit predicts more than 33 million autonomous vehicles will be sold in 2040. And the companies developing AV tech, including Alphabet's Waymo, will likely be the ones who benefit the most.