Mercadolibre actually benefits from a number of powerful moats. But is that enough to eclipse the King of Search?

Investing in global internet companies holds vast potential. While it might be hard for many Americans to believe, it's estimated that over 40% of the world -- or roughly 3 billion people -- have yet to come online.

That's an enormous growth opportunity for companies like Alphabet (GOOGL -1.35%) (GOOG -1.47%) -- better known by its former moniker, Google -- and Mercadolibre (MELI 6.98%). The former is the most oft-visited site in the world, while the latter is an e-commerce juggernaut in Latin America.

But which is the better buy at today's prices? 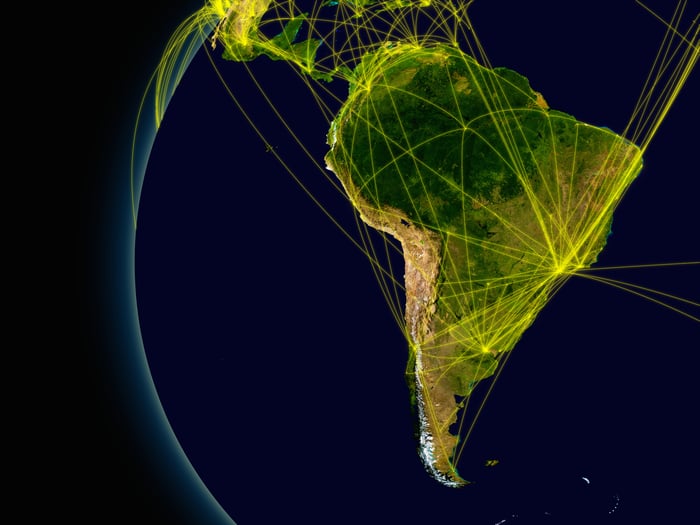 I can't tell you for certain which stock will grow more over the next five years. But we can examine how they stack up on three crucial aspects to see which you might be more comfortable with putting in your own portfolio.

First, we can evaluate how solid each company's financial footing is. We do this by looking at how large of a war chest each has, and how much cash they are bringing in on an annual basis.

Keeping in mind that Alphabet's $730 billion market cap is over 45 times the size of Mercadolibre's $16 billion cap, here's how they compare.

While the size of these two companies definitely skews things, my conclusion remains the same: Alphabet has far more financial fortitude. If an economic crisis were to strike today, Alphabet's stock might suffer, but the company itself would be just fine. In fact, it might actually grow stronger -- acquiring start-ups for its Other Bets division, or buying back shares on the cheap.

Mercadolibre, on the other hand, would have to scale back its expansion markedly if times got tough -- which would shrink its long-term market-share opportunity.

Next we have a metric that's part art, part science to measure: valuation. There's no single way to tell if a stock is "cheap" or "expensive." But if we consult a wide swath of data points, we might be able to paint a more complete picture.

Here again we have a pretty clear winner. Mercadolibre is investing heavily in its shipping capabilities to fend off Walmart (more on that below) and in its payment systems. That's probably a wise move over the long run, but the lack of profitability makes the stock look very expensive.

As a result, Alphabet -- while not ridiculously cheap -- appears to be a much safer bet at today's prices.

Finally, we have what I consider to be the most important facet to investigate: a company's moat, or sustainable competitive advantages.

Right now, Alphabet has two big moats: the value of its brand and low-cost production. According to Forbes, Alphabet's Google is the second most valuable brand in the world -- worth over $132 billion. That shouldn't be surprising, as "Google" has become an everyday verb.

And when it comes to low-cost production, data is the real gold Google is mining. Right now, the company has eight different products with over 1 billion global users: Search, Maps, Gmail, YouTube, Android, Chrome, Google Play Store, and Google Drive. While most of these products are free -- and very popular -- Alphabet can collect user data, which it then uses to offer up targeted ads. Its advertising business, after all, accounts for the lion's share of Google's revenue. It's a major advantage in the age of the internet.

Mercadolibre, for its part, has a host of advantages as well. While brand value is harder to come by given the regional focus of the company, it's a very well-known name and popular among Latin Americans. The company is also in the process of building out a fulfillment network (MercadoEnvios) to guarantee shipping for a lower internal cost than any rivals in the area. That's an expensive battle it's currently waging against companies like Walmart -- but one that will be tremendously important if successful.

But that's not all: Mercadolibre's MercadoPago is also gaining enormous momentum as a payment option. Because many Latin Americans are not served by a bank, the company's tool provides a crucial lifeline for making e-commerce purchases. And because of the network of vendors and merchants that accept payment via MercadoPago, there are seriously high switching costs for those who rely on it.

When comparing these two, I really can't see one company with a wider moat than another. I'm calling it a draw.

So there you have it: While both companies enjoy numerous -- and widening -- moats, Alphabet has both a better valuation and more financial fortitude. This truth is reflected in my personal portfolio, as Alphabet accounts for 12% of my real-life holdings.

But don't let this turn you off to Mercadolibre. Not only do I own shares of the stock, but it has grown to be my third-largest holdings -- albeit at a much lower allocation level.