Please ensure Javascript is enabled for purposes of website accessibility
Log In Help Join The Motley Fool
Free Article Join Over 1 Million Premium Members And Get More In-Depth Stock Guidance and Research
By Daniel B. Kline - Dec 9, 2018 at 6:00PM

The Facebook-owned device is affordable, and works without having a phone wedged into it.

Virtual reality (VR) has been the possible next big thing for the last few years. The challenge, or at least one of them, has been delivering a headset that's inexpensive, easy to wear, and relatively comfortable.

Facebook (FB 3.86%) has met those challenges with its Oculus Go. The entry-level headset starts at $199 for a 32 GB model and on the surface, it's everything consumers could ask for.

It's easy to set up through an app on your phone, and adjusting it to fit your head takes a few seconds. It's not ideal for use with glasses, but it does come with an adapter that makes it mostly comfortable for those with prescription lenses.

A quick tutorial when you first start teaches you 95% of what you need to know, and from the beginning, it's an immersive experience. You may not want to be immersed in a menu, but the screen in front of you becomes your world (so be sitting or standing someplace safe because you will have no awareness of the world around you).

Oculus is an achievement. It brings VR to the masses -- or it could if the masses decide they want it. But once you start to use it, there's something very important that's missing. 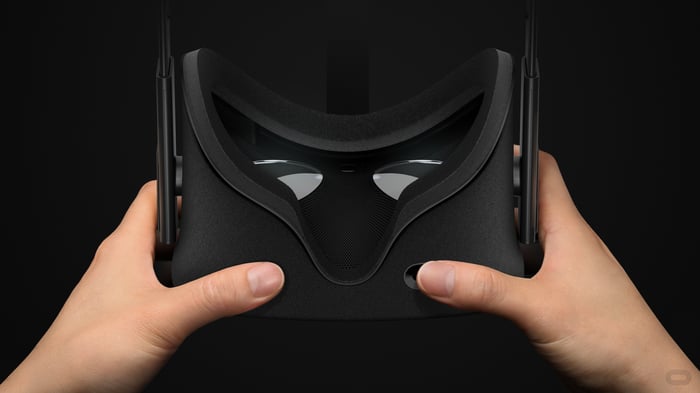 Wearing an Oculus totally shuts out the outside world. Image source: Oculus.

Oculus lets you do everything from watching television or movies to playing games. There's a lot of software available, but it's heavy on gimmicks like virtual roller coasters. These are impressive, though not in a way you want to go back to them often. The games are wonderful to look at, but the gameplay is lacking and there's no big release here -- mostly a lot of racing and shooting games.

It's also very cool to watch Netflix or Hulu on the Oculus, but it's more of a big-screen than a VR experience. In addition, while the headset is comfortable compared to others I've tried, it's still heavy and you probably would not want to watch a full movie on it.

Sports -- so far, in limited supply -- have the most potential, but I'm not sure the average viewer wants to be that immersed in an NBA game. The experience is sort of a cross between front-row seats and having a really big screen. It's a fun novelty, but not really how I would choose to watch a game.

What became clear after spending a few days with the Oculus Go is that it has no reason for being. It's cool technology, and using it for say, virtual meetings would be very useful. Yet as it currently exists, there's no killer app.

That's not to say there couldn't be. The gameplay possibilities offered by immersive virtual reality seem endless, if what actually exists remains mostly a novelty. There's no experience -- at least from the ones I have tried from the top of the "most popular" paid and free lists -- that makes me want to go through the trouble of getting out the Oculus.

Should you buy one?

Right now, VR is at the same stage 3D televisions were when they first became somewhat affordable: People bought them, then quickly realized that watching TV in 3D wasn't really something they wanted to do.

Although VR won't be the next 3D TV, you don't need an Oculus at the moment. It's fun to virtually skydive once or twice, but you wouldn't want to return to it often, the way someone might for a top-tier video game. Oculus and Facebook have delivered when it comes to hardware, and now they need to do the same with software and experiences. Only creating those killer apps will make Oculus -- and VR in general -- anything more than a novelty.