Meanwhile, the augmented reality market still has a long way to go.

Over the past year, the virtual reality (VR) and augmented reality (AR) headset market has been in the dumps, declining for four consecutive quarters. VR headset unit volumes plunged 34% in the second quarter. Still, it would be premature to write off the market, and VR/AR headset volumes have posted a modest yet meaningful rebound in the third quarter, potentially paving the way for a broader comeback. 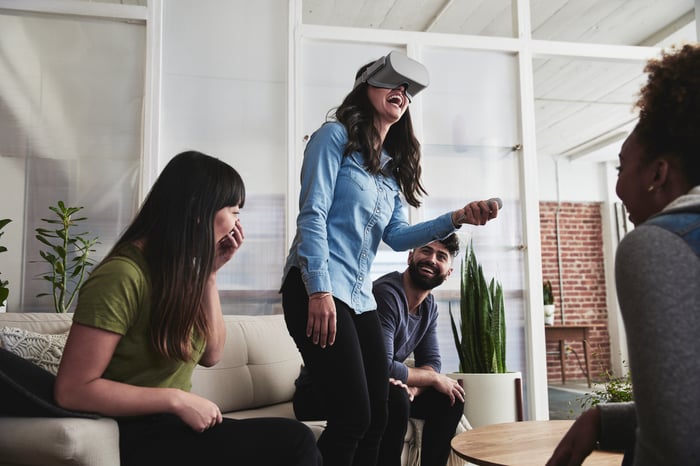 Stand-alone VR headsets like the Oculus Go are on the rise. Image source: Oculus.

IDC this week released its estimates on the VR/AR headset market for the third quarter, and the figures show that unit volumes jumped 9.4% compared to a year ago. Discounts and other promotional activity helped boost volumes, while developers continue to release more VR content as well.

"The VR market is finally starting to come into its own," IDC senior research analyst Jitesh Ubrani said in a statement. "On the consumer front, the combination of lower prices and increased content is beginning to resonate with users. Meanwhile, commercial adoption is also on the rise for a range of use cases, including training, design, and showcasing."

The market is still largely dominated by VR headsets, which represent 97% of the market, according to IDC. Total VR unit volumes worldwide came in at 1.9 million in the third quarter. The main trend that IDC is highlighting is that screenless viewers (those accessories that allow you to strap your phone to your face) are on the decline, while stand-alone products like Facebook's (FB 1.41%) new Oculus Go that don't need to be tethered to a high-powered PC are on the rise. Screenless viewers saw volumes plunge 59% while stand-alone headsets skyrocketed 429% (off a small base).

Standalone headsets now represent over 20% of the market. While the performance may lag tethered headsets due to a relative lack of processing power, the lower price points and greater convenience are more approachable for mainstream consumers. Oculus Go costs just $200, compared to the Oculus Rift's $350 price tag, which doesn't even include the cost of a separate PC (they start at $800 as part of the company's Oculus Ready Program) to power the device.

Xiaomi's Mi VR, which is based on and looks nearly identical to the Oculus Go, is also gaining traction. Those two models combined shipped almost 250,000 units worldwide, making it the most popular stand-alone headset currently on the market, according to IDC.

Tethered headsets are still selling well, with unit volumes exceeding 1 million units for the second time. Sony (SONY -0.83%) continues to lead the way with its PSVR, a VR headset accessory designed for the company's popular PS4 gaming console, at 463,000 units. Oculus was No. 2 in tethered headsets with 300,000, followed by HTC with 230,000.

When aggregating all VR categories, Oculus is the market leader, with 26% of the overall market, as the Facebook subsidiary addresses all of the underlying categories with different products.

As far as AR is concerned, most consumers' exposure to AR technology is currently delivered via smartphones. The dedicated AR headset market is still in its infancy, with Lenovo able to grab the No. 1 spot with a mere 23,000 in unit volumes. Lenovo launched its Mirage AR headset last year alongside a Star Wars: Jedi Challenges game, a bundle that IDC notes was responsible for the bulk of Lenovo's shipments.

The AR market may need more time to mature, but the VR market is starting to find its footing.