Shares of Southern Copper (NYSE:SCCO), an industry leader in copper production, plunged 16% last month, according to data from S&P Global Market Intelligence. In addition to feeling frustration with the company's third-quarter earnings report, investors sold off shares in response to the bears on the Street who repeatedly voiced their concerns regarding the stock.

Reporting Q3 revenue of $1.72 billion and earnings per share of $0.48, Southern Copper failed to meet analysts' top-line expectation of $1.80 billion and their EPS estimate of $0.52. 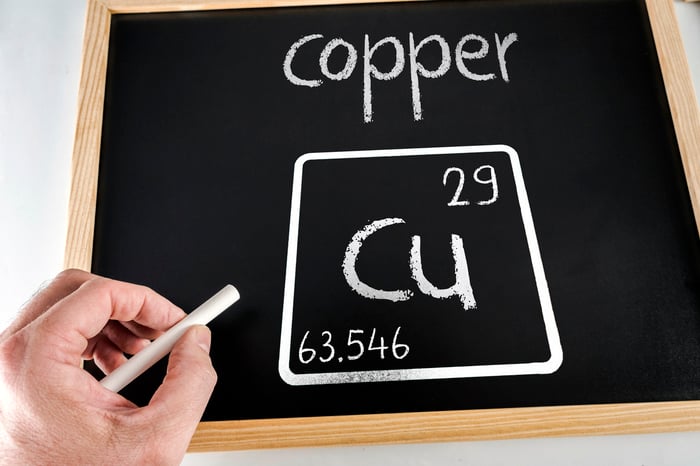 Although Southern Copper reported 1.1% and 6.9% year-over-year increases in copper production and molybdenum mine production, respectively, in the third quarter, these increases weren't enough to mitigate the effect of falling prices of numerous metals. In the press release addressing the Q3 results, management primarily attributed the company's 8.1% year-over-year drop in net income to lower metal prices -- though it also credited the decline to "a higher non-cash tax provision for the quarter to recognize our tax liability."

Although Southern Copper missed analysts' revenue and earnings estimates, there were lustrous spots in the company's earnings report. For one, the company announced that it resumed control of the San Martin mine, located in Zacatecas, Mexico, following an 11-year illegal stoppage of operations. According to management, when operations resume, the mine will have annual zinc, silver, and copper production capacities of 20,000 tons, 2.8 million ounces, and 8,000 tons, respectively. Between the resuming of operations at San Martin and reaching full capacity at the new Toquepala concentrator, management contends that 2019 "will mark another inflection point in the extraordinary growth" of the company

Granted, Wall Street appears unenthusiastic about Southern Copper's stock at the moment, but investors should remember that analysts often have shorter time horizons that the long-term holding periods that we espouse. Consequently, investors shouldn't be dissuaded by the bears on the Street. Instead, they should pay greater heed to the company's strong commitment to long-term success. In addition, they shouldn't be too taken by the fact that the company missed analysts' Q3 expectations. Rather, they should consider the company's achievements in strong operational cash flow growth -- $1.79 billion through the first nine months of 2018, compared with $1.28 billion through the same period in 2017.