Apple (NASDAQ:AAPL) dethroned Fitbit (NYSE:FIT) to become the world's top wearables maker in the fourth quarter of 2017, according to IDC. Apple retained the title during the first two quarters of 2018, but it lost the crown to Chinese tech giant Xiaomi (OTC:XIACF) in Q3. 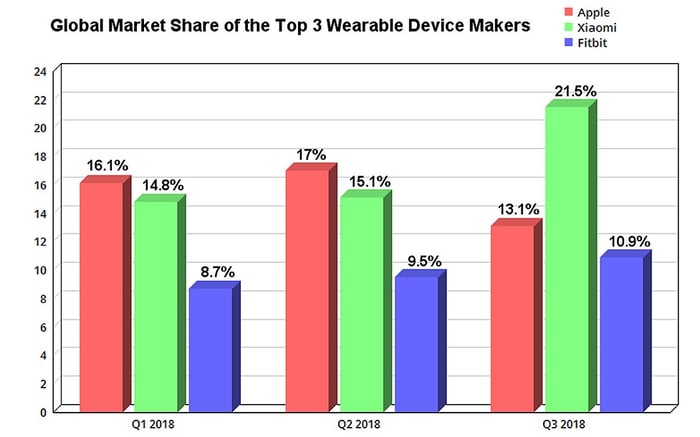 Xiaomi's shipments surged 91% annually to 6.9 million, fueled by robust demand for its Mi Band 3. The basic fitness tracker, which costs about $30 and can track a user's heart rate and steps, helped Xiaomi gain ground in India, Europe, the Middle East, and Africa.

Yet Xiaomi could be hurting Fitbit, which saw its shipments fall 3% to 3.5 million. Fitbit offset softer demand for its basic fitness trackers with sales of the Versa smartwatch, the Charge 3 fitness tracker, and its Ace fitness tracker for kids, but it still lagged Xiaomi and Apple in terms of market share.