Caterpillar (NYSE:CAT) stock's chart for the past few months looks like nothing short of a roller-coaster ride. Shares of the mining and construction-equipment giant soared 11.8% in November, according to data provided by S&P Global Market Intelligence, after a nerve-wracking 20% drop in October. Investors who thought the November recovery was here to stay are already breaking into a cold sweat, what with Caterpillar shares dropping nearly 10% so far in December. What's going on here?

The sharp drop in Caterpillar shares in October appeared overdone. While the company's third-quarter numbers didn't live up to Wall Street's expectations, Caterpillar stuck with its adjusted earnings guidance of $11 to $12 per share for the full year. That didn't really warrant the steep sell-off, which is why contrarian investors found an opportunity and helped Caterpillar shares kick off November on a positive note. 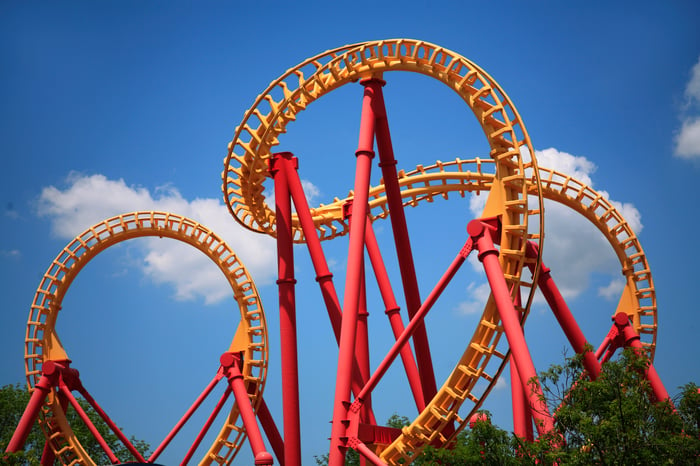 In hindsight, November would've likely been another tough month for Caterpillar stock given the trade-war jitters, volatile oil prices, and the turmoil in the broader markets if not for the low base it bounced off from at the end of October.

In fact, Caterpillar's retail sales statistics, released in November, were a tad discouraging as well. Its total retail machine sales grew 18% during the three months ended October. That number might look good, but it was the lowest such growth rate in several months. Caterpillar's retail sales for three-month rolling periods had been rising steadily since mid-last year until around this past June, when they started to decelerate. The latest figures have further fueled concerns that Caterpillar's growth has, indeed, peaked.

Nearly all of the gains in Caterpillar's share price in November came toward the tail end of the month, the reason for which can be traced to three developments: the Federal Reserve's soft stance on further interest rate increases, anticipation of a truce between the U.S. and China after President Trump's meeting with President Xi Jinping of China, and the Bank of America Merrill Lynch quickly following it up with a ratings upgrade on Caterpillar shares, upping its price target to $163 from $140.

Of course, the market knows better than to read much into a stock's ratings upgrade, and Caterpillar shares are already back to feeling the heat amid lack of clarity about negotiations between the U.S. and China. Fear has gripped global markets, and Caterpillar is, unsurprisingly, taking a hit given its huge global footprint and its dominance in cyclical sectors like mining and construction.

As an industrials bellwether, Caterpillar shares cannot escape any impact of geopolitical and economic concerns even if the company manages to grow its sales and profits. That there are a lot of moving parts with Caterpillar, including unpredictable and uncontrollable factors such as trade relations and commodity prices, is something investors in the stock should bear in mind going forward.