Stocks rallied Monday after discussions between President Donald Trump and Chinese President Xi Jinping produced a 90-day cease-fire in the brewing trade war between the countries. The Dow Jones Industrial Average (DJINDICES:^DJI) and the S&P 500 (SNPINDEX:^GSPC) opened higher but drifted down a bit during the session.

Trade-sensitive stocks like Caterpillar (NYSE:CAT) made gains, and so did Qualcomm (NASDAQ:QCOM) after it put to rest any notion that its failed merger with NXP Semiconductors (NASDAQ:NXPI) could be revived. 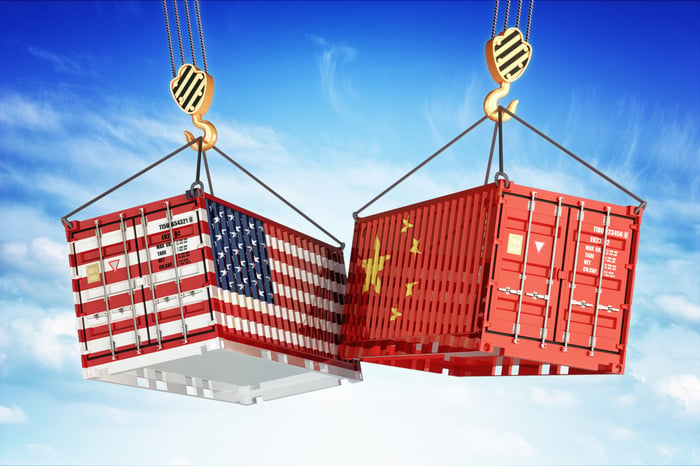 Caterpillar climbs on pause in the trade war

Shares of Caterpillar jumped 2.4% thanks to the easing of trade worries and an analyst upgrade. Bank of America Merrill Lynch analyst Ross Gilardi raised his rating on the equipment maker from neutral to buy and increased the price target for the stock from $140 to $163, implying a 17% move up from today's closing price.

In October, Caterpillar reported its best third-quarter profit in the company's history, beating expectations and maintaining guidance for full-year adjusted profit, but those results were not enough to compensate for investor concerns about the impact of tariffs and slowing global growth, and the stock lost over 20% during the month.

Caterpillar executives tried to downplay the risks to its China business in the most recent conference call, saying that China sales only account for 5% to 10% of the total. But sales there continue to be an important growth engine for the company, and a reprieve from trade war worries renewed investor interest in what could be a relatively cheap stock.

Qualcomm on the NXP deal: We're so over that

The White House announced that President Xi told President Trump at the G-20 meeting that he was open to approving the previously unapproved merger between Qualcomm and NXP, but Qualcomm squelched any possibility that it would revive its offer for the Dutch semiconductor company. "Qualcomm considers the matter closed," said a company spokesman in an email to news outlets, and shares rose 1.5%.

Qualcomm announced in October 2016 that it intended to acquire NXP for $110 per share in a $47 billion cash deal. The company raised its bid to $127.50 in February 2018 after shareholders were reluctant to give up their shares. The San Diego-based company finally abandoned the deal in July after failing to win approval from Chinese regulators, announcing it will spend $30 billion to buy back its own shares while paying a $2 billion termination fee to NXP, which will continue as an independent company.