I don't particularly love brick-and-mortar retail stocks at the moment, but Target (NYSE:TGT) has recently made it onto my radar. Target sold off hard after its recent third-quarter release, declining roughly 10% that day and eating into the nice gains investors had enjoyed this year. Despite the stock's decline, there were actually a lot of positives in the earnings report, and, with the stock trading at under 12 times earnings, I think it's worth a look.

Like most other retailers, Target is moving fast in e-commerce and omnichannel retail, which is eating into margins. However, Target is putting up some solid growth metrics that I think may be sustainable over the next few years. 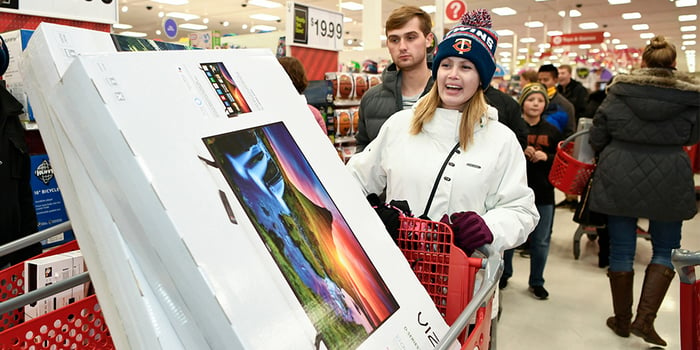 I'm not sure of the specific reason Target sold off, but I imagine it had to do with gross margins. Analysts seemed to focus on this in the question-and-answer section of the recent conference call.

Target posted 28.7% gross margins in the quarter, a decline of 900 basis points year over year, falling short of expectations. The decline caused operating margins to fall 40 basis points to 4.6% from 5% last year, despite 5.3% revenue growth on top of a robust 5.1% comparable-store sales growth.

But bad news could be good news in disguise

Investors should note that the gross margin decline is in support of several growth investments the company is making that should keep revenue growing over the near term. Of note, better-than-expected e-commerce sales, which grew 49% year over year, put pressure on margins. Online sales are not scaled yet, and therefore currently carry lower gross margins than in-store sales. Ironically, the more e-commerce succeeds, the worse the company's gross margins will be in the near term.

The other reason for gross margin declines was also part of a revenue-generating investment. This year's Thanksgiving was earlier than that of 2017, so Target pulled extra inventory into the third quarter in preparation for the earlier holiday.

Inventory shot up $1.9 billion in the quarter, which not only increased inventory but also lowered gross margin due to receiving and processing costs. So at least part of the margin pressure was due to what looks to be market-share gain that may be sustainable.

The toys and baby segments are particularly strong, benefiting from the Toys R Us bankruptcy earlier this year. Management said, "As other retailers continue to close stores and liquidate in the face of rapid changes in consumer preferences and shopping behaviors, our investments position Target to capture sales and market share by serving consumers who are no longer shopping those competitors."

What will margins do going forward?

If Target's margins remain perpetually under pressure, it would be one thing, but I don't expect margins to decline from here. In light of last year's tax cuts, Target has accelerated investments, increasing wages and investing in new growth initiatives in 2018.

These include store remodels, which management says increased comparable sales by 2% to 4% at remodeled stores. Target is remodeling 300 stores this year (out of just over 1,800), with plans for a similar number of remodels over each of the next two years. That should keep the comparable-store sales positive for the foreseeable future, barring a recession.

Target is also scaling up omnichannel initiatives: Drive Up (Target's order-online-pick-up-at-store feature) has expanded from 50 to 1,000 stores this year, and Shipt, which Target purchased just one year ago, is already delivering in two hours or less to customers near 1,400 Target stores. While digital sales were up 49%, ship-from-store sales more than doubled.

All of these new services and acquisitions have occurred over the past two years, and management hinted that the pressure on margins should stabilize going forward as they scale up. According to CEO Brian Cornell, "we believe that this year will establish a sustainable benchmark for our operating margin rate over the longer term ... We've annualized the meaningful investments in operating income we made throughout 2017, and we're poised to benefit from far greater scale across all of our initiatives."

If that's true, and Target's operating margins stabilize or even increase off this lower base, the stock looks attractive at less than 12 times earnings.

Homing in on the Target

I've never especially loved Target; it always seemed like a weird middle ground between ultra-low-priced retailers and higher-priced specialty retailers. Still, with so many smaller competitors falling by the wayside, Target has the scale to pick up incremental demand, even with competition from other e-commerce giants. And given the fuel fromstore remodels, e-commerce, and smaller-format urban stores, Target is one of the few retailers I might consider buying today, given its bargain-basement valuation.