Apple (NASDAQ:AAPL) supplier stocks have run into turbulent weather thanks to what seems like soft iPhone demand. Cupertino's decision to not report iPhone sales numbers going forward has sparked dismay on Wall Street, giving birth to a common belief that it is now expecting a slowdown in sales of its bread-and-butter device.

Rumors that the production of the new iPhone XR has been slashed twice in two months have added fuel to the fire, while a series of guidance cuts by key suppliers seems to corroborate the decline. Qorvo (NASDAQ:QRVO) is one of those supply chain plays that has taken a hit because of Apple's perceived problems. 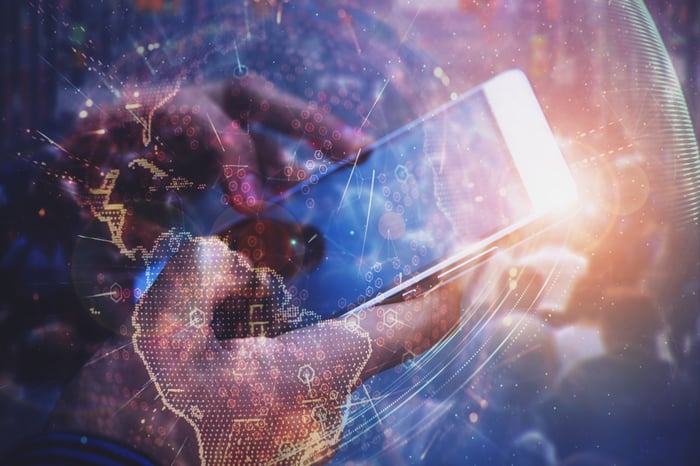 Looking past the problem

Qorvo recently slashed its top-line guidance for the third quarter by nearly 8%. It now expects $820 million in revenue for the quarter that ends in December, compared to the original guidance of $890 million that was issued just two weeks prior. That's not surprising, as Apple reportedly accounted for 36% of Qorvo's total revenue in fiscal 2018, which ended in March this year, so any slowdown at Apple will hit Qorvo hard.

Qorvo specifically blamed the weakness on "recent demand changes for flagship smartphones," but at the same time it pointed out in a press release that "demand from China-based handset manufacturers remains measured and largely unchanged." Qorvo has also made it clear that its infrastructure and defense products (IDP) business is progressing per expectations.

Qorvo's substantial dependence on Apple was the reason its mobile products revenue increased 37% sequentially to $667 million in the quarter ended in September, which would have included the ramp-up for the new iPhones. But on a year-over-year basis, the chipmaker's mobile revenue was up just 5.9%. For comparison, Qorvo's total revenue increased nearly 8% over the prior-year period. This means that Qorvo is doing the heavy lifting elsewhere to offset the mobile weakness.

Qorvo's IDP revenue increased almost 15% annually during the last quarter. This business now supplies nearly a quarter of the company's total revenue, and was instrumental in mitigating the tepid growth in mobile product sales. It wouldn't be surprising to see this segment get even better in the long run, as it is set to capitalize on a few secular growth trends.

Fifth-generation (5G) wireless infrastructure, for instance, is turning out to be a solid catalyst for Qorvo. The company's Gallium Nitride (GaN)-related revenue shot up 27% year over year last quarter thanks to the growing demand for 5G base stations. Base stations play a crucial role in relaying wireless signals, and GaN is capable of handling higher bandwidth with greater efficiency.

That's why wireless base stations are the biggest consumers of radio-frequency (RF) GaN. Looking ahead, 5G is expected to be the next big catalyst for RF GaN consumption, and should push the size of this market to nearly $1.3 billion by 2023 compared to $380 million at the end of last year. So the RF GaN market will grow at a compound annual growth rate of nearly 23% over the forecast period.

That means Qorvo's GaN revenue grew at a faster pace than the end market last quarter, which means that the company might be gaining market share there. The good news is that Qorvo was already leading the GaN market in 2016 with a 23% share of this space. Now even if the chipmaker's market share inches up to 25% by 2023, its top line will get a nice shot in the arm.

And Qorvo enjoys another solid catalyst beyond 5G in the IDP business: the Internet of Things (IoT). Specifically, it is going after the connected car market with chipset solutions to power vehicle-to-everything (V2X) communications. This is a smart thing to do, as this end-market could hit $100 billion in revenue in the next eight years and clock an annual growth rate of over 17%.

More importantly, Qorvo is already gaining traction in this lucrative market, as it says it is supporting "multiple automotive OEMs in worldwide field trials."

Bears might argue that Qorvo's reliance on Apple for a major portion of its revenue will get in the way of a turnaround. That's a valid argument, as mobile products supply 75% of its total revenue. But at the same time, we shouldn't forget that the 5G rollout will boost the company's mobile business, as demand for Qorvo's antenna modules and switches will rise.

All in all, it wouldn't be surprising to see Qorvo making a comeback next year. Analysts expect its top-line growth to accelerate marginally, and earnings are estimated to increase in the mid-teens, making Qorvo stock a nice turnaround play given that it trades at less than 10 times forward earnings.