Don't divert your attention to what doesn't really matter with this telehealth leader.

Teladoc Health (TDOC 8.00%) isn't the high-flying stock it was earlier this year. After soaring more than 150% year to date as of late September, the telehealth stock sank more than 35%.

Did Teladoc's revenue growth slow down significantly? Did the company miss Wall Street's expectations? No and no. Instead, Teladoc's fall has stemmed in part from a sluggish overall market, but also from a few factors that really don't affect the stock's investing premise. Despite these distractions, Teladoc Health remains a fantastic long-term buy. 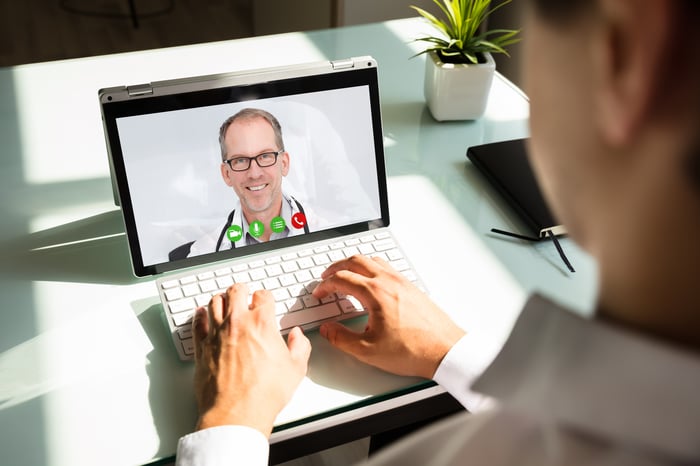 You would expect a high-growth healthcare technology stock like Teladoc Health to be pulled down in an overall market downturn. And that's exactly what happened in October. It's hard for even good stocks to rise in the face of a major stock market pullback. But Teladoc was also hit by three other developments.

The first two came on Nov. 5, 2018. Teladoc Health's share price dropped after news surfaced that the company's CFO, Mark Hirschhorn, had sold a large block of shares, and a short-seller made public allegations of "questionable sales practices" at Teladoc's BetterHelp subsidiary. The third challenge for the stock stemmed from a Dec. 5 report from Southern Investigative Reporting Foundation (SIRF) about how Teladoc handled an alleged affair between Hirschhorn and an employee of the company.

Are any of these developments cause for concern for Teladoc? Not really.

Hirschhorn did sell 10,000 shares of Teladoc Health stock on Nov. 2, 2018. But the sale was scheduled on June 15 under a provision allowed by the Securities and Exchange Commission (SEC). This SEC provision is frequently used by executives of many companies to buy or dispose of stock. Hirschhorn also used the provision in June to schedule a purchase of 2,284 shares on Oct. 31.

As for Hirschhorn's alleged affair, Teladoc issued a press release responding to SIRF's report. The company stated that the report "contains several factual inaccuracies." It acknowledged that an investigation was initiated in 2016 after allegations were made against Hirschhorn. Teladoc said it used an outside law firm to conduct the investigation. Violations of the company's workplace policy were found, with Teladoc stating that "swift and appropriate disciplinary action" was taken.

None of these issues have a material impact on Teladoc's future. And that future remains very bright.

Although the use of virtual care services has increased tremendously, telehealth is really only in its infancy. There are several reasons the industry as a whole will continue to grow for a long time to come.

One important factor is the transition to value-based care in the U.S. In the past, healthcare providers have primarily been paid for the services they rendered. That's changing. Value-based care programs compensate providers on the outcomes of the care given.

This transition is likely to lead to healthcare providers looking more closely at how they can deliver care in more cost-effective ways. Value-based care will become more widely adopted, especially as the U.S. population ages and drives demand for healthcare services. Telehealth will almost certainly be a top solution to help control rising healthcare costs.

But telehealth won't just grow in the U.S. Countries across the world face similar challenges as the U.S.

Teladoc Health enjoys a huge competitive advantage in the telehealth market. The company already claims 40% of the Fortune 500 as customers. It provides the widest range of virtual care services in the industry. It's also the only telehealth company that has a global footprint, with operations in North America, South America, Europe, and Asia.

The company has multiple pathways to grow. Teladoc plans to expand its penetration in key markets by winning new customers, increasing the utilization of existing customers, and growing its international operations. The company also intends to expand the scope of the products and services it offers.

Teladoc Health isn't profitable yet. Its market cap of around $3.7 billion is still pricey despite the recent pullback, with shares trading at nearly 10 times sales. But Teladoc could be viewed as a high-priced bargain.

That might seem like an oxymoron. However, the long-term growth prospects for Teladoc could prove the description to be an accurate one looking back a few years from now. Stratistics MRC projects that the global telehealth market will more than quadruple between 2017 and 2026. You can bet that Teladoc will capture a significant share of that market.