Tuesday saw a mixed session on Wall Street, with most indexes moving modestly lower after having given up substantial increases during the morning. Turbulence remained the norm for market participants, who today had to digest both positive news on the Chinese trade front as well as partisan confrontations in Washington between leaders of both political parties. Many investors seem nervous that the overall trend for stocks is no longer clearly upward. Bad news from some individual companies also weighed on sentiment, and CalAmp (NASDAQ:CAMP), Aramark (NYSE:ARMK), and Urban Outfitters (NASDAQ:URBN) were among the worst performers on the day. Here's why they did so poorly.

CalAmp stock dropped 16.5% after the company warned that its fiscal third-quarter financial results wouldn't be as good as it had initially hoped. The IT communications specialist now believes that revenue for the quarter will come in between $88 million and $89 million, leading to adjusted earnings of $0.23 to $0.25 per share. Those numbers were roughly $5 million to $10 million below previous guidance on the sales front, and $0.06 to $0.10 per share lower in earnings. Given the supply-chain problems that prompted the warning, CalAmp will have to demonstrate to shareholders that it has its issues resolved before they can feel comfortable about the company's prospects. 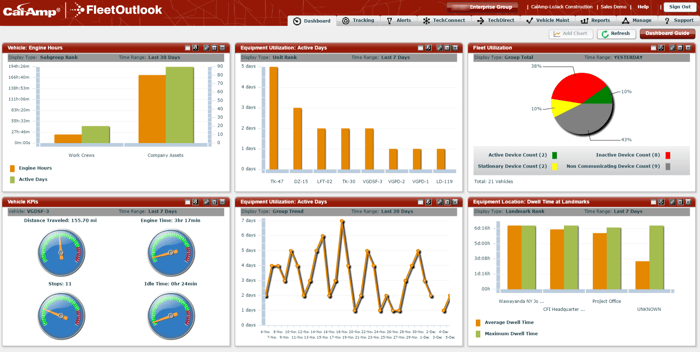 Shares of Aramark finished lower by 12% in the wake of its latest forecast from its investor day presentation. The business services and facilities management company said that it believes that organic sales growth will likely be limited to just a 2% to 4% range over the next three years, and even the promise of double-digit percentage gains in adjusted earnings per share wasn't enough to encourage investors about Aramark's prospects. Near-term guidance was weaker than expected. Moreover, Aramark still faces plenty of competition, and investors seem uncertain that the company will finish ahead of its rivals.

Finally, Urban Outfitters stock finished lower by 7%. The specialty retailer added a comment in its quarterly filing with the U.S. Securities and Exchange Commission that its comparable retail segment net sales were up mid-single-digit percentages so far in the fiscal fourth quarter. That growth rate is down from the 8.7% pace of revenue growth for the fiscal third quarter, and investors appear to be concerned that solid past performance for its namesake store chain and its Anthropologie and Free People concepts could deteriorate in the key holiday season. The drop sent shares to their lowest level since early 2018, calling into question some of the progress Urban Outfitters has tried to make in the interim.