Auto stocks are trading at low valuations right now, which has made for some impressive-looking dividend yields. But autos are cyclical stocks, meaning that their profits surge when the economy is strong, and then shrink -- or disappear entirely -- when the economy turns down.

That means we have to look carefully before jumping on those high dividend yields. Honda Motor (NYSE:HMC) is a household name in the U.S., but its stock seems to be somewhat overlooked by U.S. investors. I think it deserves a closer look, and not only for its 3.5% dividend yield.

But first and foremost, we need to decide whether that dividend is sustainable. Let's take a closer look at Honda to see whether its dividend is one that we can rely on over the longer term. 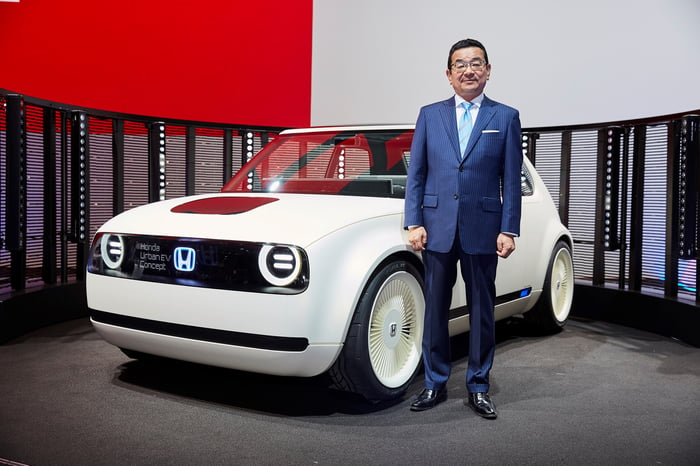 Note that Honda's dividend yield is just under 3.5%, well above average. Anytime we see a dividend yield over 3%, we need to dig deeper before we invest, because there are a couple of important questions that need to be answered.

The first question we need to ask: Is the dividend yield high because the stock's valuation is lower than its peers'? Sometimes, when a company's valuation is low, it can turn out to be a value opportunity, a good company that the market has overlooked for the moment. But it can also mean that the company has hit a rough patch, rough enough that well-informed investors are staying away from the stock.

Right now, Honda's American depositary receipts are trading at about 5 times its earnings per share over the past four quarters. Here's how that compares with the valuations of several of Honda's global competitors.

Data source: Thomson Reuters. The calculation for General Motors excludes one-time items, notably a very large non-cash charge that GM took in the fourth quarter of 2017 related to tax-law changes in the United States. With one-time charges included, GM's price-to-earnings ratio is about 68.

Honda's valuation is at the lower end of the range, but it's not remarkably out of line: Most of its rivals are trading between 5 and 6 times earnings. To the extent that Honda's valuation is low, it's not because the company has been performing badly. While Honda's auto sales were down a bit in the most recent quarter, strong motorcycle sales and good results for its financial-services unit helped it to a decent profit.

Honda's stock price has fallen about 19% over the last year, but it's hardly an outlier: Most of its peers' stocks have fallen sharply over the last year, on concerns about stalling sales growth and the U.S.-China trade war. (The one exception: Toyota.) 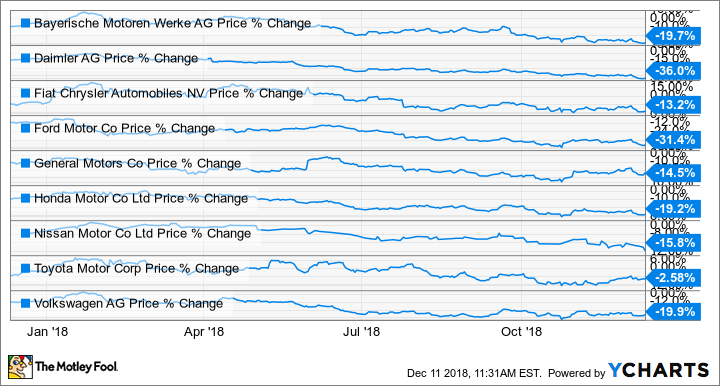 BMWYY data by YCharts.Share price changes are shown for the year ended Dec. 11, 2018.

In fact, there are some good reasons to think that Honda's business is on an upswing. CEO Takahiro Hachigo has been working to restore Honda's product mojo, with some promising results. He has also boosted investment in future technologies and cut a deal to invest in GM's self-driving subsidiary, Cruise Automation.

In fact, things are going well enough that Honda has boosted its dividend twice in the last year, most recently to 28 yen (about $0.25) as of Oct. 30, and it has been buying back its own shares.

To answer the question, Honda's valuation isn't particularly low, and the company isn't in crisis -- in fact, it may be on an upswing.

That's an especially important question with companies that are in cyclical businesses, like autos. Automakers have high fixed costs, meaning that they need a fairly high level of sales just to break even. Because auto sales tend to rise and fall with consumer confidence, following economic cycles, automakers' profits tend to rise and fall as well. Historically, many automakers have swung to losses during recessions.

Generally speaking, the automakers' sales and profits have been good for several years now, but economic concerns are rising. Will Honda be able to sustain its dividend through the next recession, whenever it arrives?

We won't know for sure until it happens, but signs are promising. Like most of the major automakers, Honda now holds a hefty cash reserve to fund its future-product programs and other obligations through a recession. As of Sept. 30, Honda's cash hoard totaled 2.14 trillion yen ($18.9 billion), in line with most of its well-funded peers.

Also of note, Honda's payout ratio is low by the standards of its peer group at just 16.7%. Honda has said that it intends to raise its dividend payout to about 30% of net earnings over time.

Is Honda's dividend a good bet?

While Honda might have to trim or eliminate its dividend in a steep or protracted recession, it should have ample cash to maintain payments through a moderate downturn -- and it's quite possible that Honda will raise its dividend again before the next recession arrives.