Honda Motor Company Ltd. (NYSE:HMC) boosted its full-year profit guidance after strong motorcycle sales and a good result for its financial-services unit helped push its revenue and profit above expectations.

Honda also announced a small increase to its quarterly dividend. 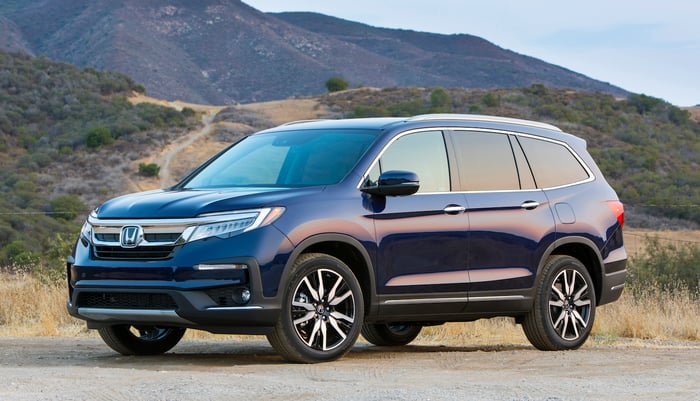 Like many Japanese companies, Honda uses a fiscal year that runs from April 1 through March 31. The quarter that ended on Sept. 30, 2018, was the second quarter of Honda's 2019 fiscal year.

Honda's auto sales were down 3.6% from a year ago, hurt by flooding that shut down a Mexico factory and lower sales of the compact CR-V crossover SUV in China. Despite the sales decline, automotive revenue fell slightly (0.9%, to 2.62 trillion yen ($23.26 billion)), thanks to a stronger "mix" of products sold versus the year-ago period. In particular, Honda's Pilot SUV has sold very well in the United States, largely offsetting revenue lost from lower sales of sedans.

Honda's global sales of motorcycles rose 1.5% from a year ago, as gains in Europe, Japan, and other parts of Asia (particularly Indonesia and Vietnam) offset somewhat lower sales in North America. Motorcycle revenue rose 5.7% to 539.3 billion yen ($4.78 billion). Motorcycle operating profit rose 24% from a year ago, to 85 billion yen ($753 million), and operating margin rose 2.4 percentage points to 15.8%.

Honda's overall revenue and profit were offset somewhat by unfavorable currency-translation effects. If exchange rates had been constant, revenue would have risen 3.6% from a year ago, and operating profit would have risen 44.4%.

Looking ahead: Honda increased guidance and its dividend

Honda boosted its revenue and profit forecasts for the fiscal year that will end on March 31, 2019, as follows:

Honda expects increased revenue from improved model mix, but said that unfavorable currency effects will likely more than offset the potential profit gain. It expects a small increase in motorcycle sales for the full year, but said that sales of autos and power products are likely to be roughly flat versus fiscal 2018.

As a result of the improved profit forecast, Honda's board of directors voted to increase the company's second-quarter dividend to 28 yen ($0.25) from 24 yen a year ago.